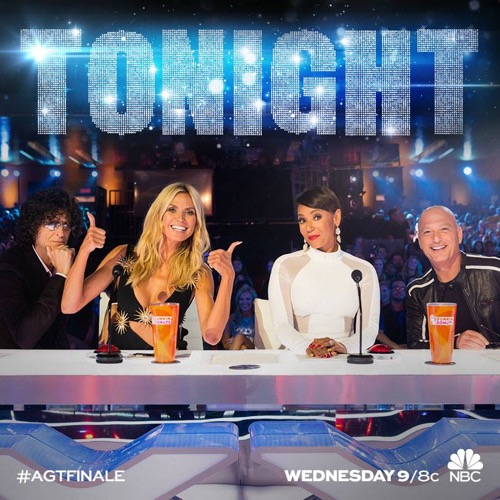 Tonight on NBC America’s Got Talent returns with an all new Wednesday September 16, Season 10 finale called “Finale Results”. We’ve got your recap down below! On tonight’s episode the winning act is revealed in the Season 10 finale. Included: guest performers and surprises.

On the last episode, the top 10 acts competed one last time live at Radio City Music Hall for the chance to win one million dollars and be voted the most talented act in America.

On tonight’s episode per the NBC synopsis “season 10 winner is announced! Host Nick Cannon reveals who America chose as the $1 million winner of “America’s Got Talent.”

The judges get their intro and we see a montage of the final acts throughout the seasons then the 10 finalists are introduced. Mel B says they are all so talented and says it’s a tough decision. First up is the Craig Lewis Band with Yolanda Adams as a guest. They perform Foreigner’s I Want to Know What Love Is and it’s amazing. Howard later talks about how Heidi is always singing and how horrible she is. He says he wants her to sing on stage so he can hit his buzzer. Mel B says it’s high and Howie mocks Heidi.

We see the final 10 hanging out in the Dunkin’ Lounge then Nick introduces the three magicians starting with Oz Pearlman. Oz says he’s going to do a card trick with invisible cards. He acts like he’s dumping cards and tells Heidi to pick one then rip it in half. He tells her to rip those up too. He says one of the cards is titanium and tells her to feel for it. She mimes picking it up and he says to look at it and see the color and the card number. Then he pops a card into his hand and she says it’s the three of hearts.

He shows the card and that’s what it is. Oz says that’s a mentalist doing a magic trick then he introduces Derek Hughes and season 9 winner Matt Franco. Matt says the mentalism stuff is crazy and says they should try it. Matt says they have celebrity photos and shows on of Mel B, Howie, Jason Mraz, Nicole Scherzinger, Heidi. Derek asks if these are the celebrity guests from his TV special. Then he shows Neil Patrick Harris, Penn & Teller.

He has Derek shuffle the photos and choose one. Matt asks questions about who he picked and then reveals he chose Neil. Matt shows he also chose Neil. Then Piff the Magic Dragon flies down onto the stage and he asks Derek to undo his harness. Derek says he has to DVR Matt’s show. Matt says to find two more magicians. He whistles and Penn & Teller come out on stage. Penn has Piff’s little table and makes all the Piff noises he usually does.

They send Teller to have Mel B to choose a card. They show it to her. It’s three of spades. They have Mel B write her name on it. Piff still dangles from the wires. Penn hands him some flash paper and tape. Piff wraps the flash paper around the stack of cards then tapes it. He has them pull out a tiny sword and Penn makes silly noises. Piff mocks him. Then he stabs the stack of cards and tells Penn & Teller to get out of his sandwiches but they eat them. The cards burn and only Mel B’s card is left on the sword.

Next is a performance by Freelusion with Uzeyer. They are helping out the injured balancer. It’s a really neat act and Howard stands and says people have gone insane. He says this is his last season on AGT and tells Nick he’s a joy and he’s loved getting to know him. Then Howard introduces a video of Nick with scenes throughout the season. We see Nick goofing around with the contestants dancing around. Howard says single Nick is a whole new guy.

Next up is Drew Lynch and Gary Vider together. They have a joke off. Howie says they are supposed to be roasting each other and says they can’t be nice when roasting and they need to be evil and brutal like Mel B. Howie then brings out Jeff Ross, the Comedy Central Roastmaster General. Jeff comes out and says so many legends have performed there and includes the Professional Regurgitator. He tells them they’re being too nice and have to say out loud awful things.

He says to Drew he’s on Last Comic Stammering. Drew laughs. He tells Gary he can’t beat a kid with a disability. They both laugh. He says they both have big futures as comedians. He tells Gary that if his delivery were slower it would come with a free pizza. He talks about Heidi and says her judging funny is like Howard judging beauty. He asks if Howard gets his hair done at PetCo. He tells Heidi she’s beautiful and says she married a seal, now try a walrus and marry him.

Then Jeff says roasting comes from a place of love and says he loves Mel B. He says her spice rack is on point. He says he’d like to press her golden buzzer. Jeff insults Trump and then says the most important part of roasting is to take it as well as dish it out and tells them to insult him. He stutters at Drew. Gary says Jeff looks like Howie if Howie stopped trying. Drew says Howie and Jeff can never shake hands because Jeff is disgusting and Howie’s a germaphobe.

Nick introduces The Professional Regurgitator with Penn & Teller. Teller makes a bunch of goldfish appear but The Regurgitator says those are too big. He swallows the lid to a film container. He hands Teller a pen and says to mark the container. He swallows a small goldfish. We see the fin hanging out and he has the lid then the fish and now he takes the container and fills it with water and says he will find the fish and put it in the container and put the lid on it.

They stare at his stomach as he slaps it. He spits out the container with the lid on it. It’s got Teller’s mark on it and he takes the lid off and he pours it in the cup and they see the fish. Next up is a look at the acts that got buzzed. We see a Buzzer Therapy Support Group meeting hosted by Jerry Springer. We see the guy who spits milk out his eye and the nice older lady singer. Samantha cuddles them. The singing Asian ballerina is there and Jerry says no dancing during therapy. Springer does a final thought like his show.

He says it could be worse than being buzzed off AGT – you could be a guest on his show. Benton Blount performs next with Rachel Platten. They sing her Fight Song.

Howard talks about how Mel B hits Howie all the time. She says she’s patting him. Then we see Heidi and Mel B hitting him. Howie says it’s because she’s from the other side of the world. Howard says it’s better than being sung to. Howie pulls her hair and she hits him. Next is Paul Zerdin and his standard puppet. His puppet calls him ugly and nasty looking. He does an echo – cute. He says a dummy can’t win it and season 2 winner Terry Fator comes out with his Elvis impersonator puppet.

The two puppets talk and Elvis says he thought he was a proctologist. The Elivs puppet says he knows no Elvis songs. Elvis says he’s going to lip synch like Britney Spears. He says the judges won’t know the difference. It sounds great. Then he tells Sam to try it and Paul’s puppet does it. Next is a flashback to the golden buzzer winners. Now it’s time for the first results. Nick reveals the top five in no particular order. It’s Derek Hughes vs Oz Pearlman. Nick announces that Oz Pearlman is in the top five.

Nick next announces fifth place is The Craig Lewis Band. Mel B tells them not to be disappointed and says last night was their best and says to keep doing what they do. Nick then says it’s Howard’s last show and he’s been with them for four seasons and changed the show for good. We see a montage of all of Howard’s seasons. Howard says he thought it would be cool to judge and says he hoped he could take someone who was struggling and offer good advice because he was told he had no talent for years.

Howard says he likes the judging panel and loves them all. He says the talent was incredible this year then calls attention to the crew and producers who work hard back stage. He thanks the viewers too. The crowd cheers for Howard and Howie comes to hug him then the other judges do too. The next result is now. Nick announces that fourth place goes to The Professional Regurgitator. The crowd boos at him taking fourth. He says he loved the show and it’s been brilliant.

Nick then announces that third place goes to Oz Pearlman. That puts Paul Zerdin and Drew Lynch in the final two positions.

We see a montage of Oz’s performances this season. Howie says he wants him to know that he’s a star and thanks him for his talent. Now it’s down to the final two. Nick says one will win $1 million. Paul says he’s nervous and anxious. Drew says Paul is one of his favorite acts on the show and says Paul is so handsome and says to check out his jawline.

The judges offer final comments and Howard says they’re both winners no matter what. We see a montage back of both Drew Lynch and Paul Zerdin through the season. Nick says there was only a 1% difference in the votes between them. The season 10 AGT winner is Paul Zerdin. Paul says he’s speechless and thanks everyone. He says it’s surreal. He cries and then Drew gets lots of cheers from the crowd. He also says thanks and says Paul truly deserves it.