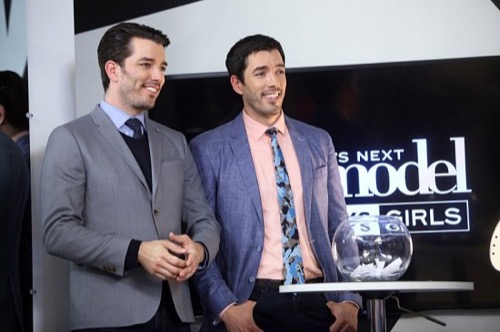 Tonight on CW Tyra Bank’s America’s Next Top Model continues with an all new Wednesday, cycle 22 episode 2 called, “The Girl Who Walks Away” and we have your weekly recap below.  On tonight’s episode Jonathan and Drew Scott from “Property Brothers” surprise the models by designing the cast house.

On the last episode season 22 began with seven men and seven women in a third “Guys and Girls” edition.

On tonight’s episode as per the CW synopsis, “Jonathan and Drew Scott from “Property Brothers” surprise the models by designing the cast house. Later, one of the contestants breaks down and decides to leave the competition, while the other participants pose for a semi-nude photo shoot in front of the public.”

Drew and Jonathan from “Property Brothers” are tonight’s special guest stars and it seems they had a surprise waiting for Cycle 22.

You see the house this season, the house in which 22 people will be moving into, has been officially designed by professionals. So not only is the place beautiful but it was supposedly outfitted for comfort. And I use the word supposedly because at first glance there doesn’t appear to be enough beds for everyone.

Sure there was a nice seated area and even a quiet nook if any one person wanted some alone time. However, where were the beds? And, really, Tyra shouldn’t have pulled this trick of hers again. It’s been done and all it did do was cause tension. In an already stressed environment.

Yet Cycle 22 get what they get and Jonathan and Drew have kindly provided extra blankets in hopes that will make up for the lack of beds.

It won’t and thus this season people are going to have share beds whether they like it or not. In fact that’s pretty inevitable when you think about it. Especially after you’ve taken into account that there are several girls who are refusing to sleep on bunk beds for no other reason than them being a prickly princess.

And even though they were still on Day One of being official cast members, the house had managed to cause an issue that no one saw coming. It ended up forcing Devin and Bello into close proximity and that led to one person seemingly hating the others.

Though it should be noted that Devin is not the one that’s actually has the problem here. All he did was walk into the house and started to make jokes. And for some reason Bello was offended. The other man has chosen to not like someone simply for being too loud. So that’s eventually going to be an issue.

And in the meantime Bello has found the perfect person to befriend. He found someone that also dislikes Devin and the two can often be found glaring at the guy they dubbed this year’s frat boy.

But, besides inner house drama, the models all had to face their first challenge of the day. They had to participate in a Pose Battle until there was only one of them left. And by the end of it, only Mamé was left standing.

Mamé had won the first challenge since joining the house and that meant that she got to stay in the Tyra Suite on their first night there.

Although, what a night that turned out to be. Mikey was busy flirting with every girl in the vicinity which was amusing. And it also sort of worked. He eventually talked Courtney into sharing a bed with him despite her having a boyfriend back home.

But every party has a pooper and this year that’s Hadassah. Hadassah had a lot of house rules and she wasn’t afraid to hold the first house meeting. So you know what that did for her? It basically made her pariah.

Lacy, to be fair, already didn’t like her but actually had a reason for this dislike now. Whereas, before, she merely didn’t like Hadassah’s aura.

And, besides these little tidbits, what should be remembered about the first night is that Alexa started to crack. She was one of the ladies that had to sleep on the floor in a sleeping bag and so she was upset that others wouldn’t let her get to sleep because they were using the photo booth till late into the next morning. Then, naturally, she was upset when she only got four hours of sleep.

So, in the end, Stefano called this one.

Alexa quit the next day at the group photo-shoot. She explained to the judges that it had gotten to be too much for her and that she couldn’t take it. Yu Tsai then attempted to convince her to stay but Alexa had a foot out of the door and no one could have talked her into sticking around.

Which was too bad for her. Their second photo-shoot was going to be done by famed photographers Erik Asla and Massimo. And the rest of the models, you know the ones that stuck it out, got incredibly excited by the opportunity to get photographed by such men.

Though that doesn’t mean there wasn’t drama on set. The issues that I saw coming between Devin and Bello did finally come back to bite them both.

Devin started to make fun of Bello’s looks back during makeup and later Bello in turn was giving him a lot of looks when Devin was getting photographed. So what really blew things up was when Devin cried after his photo-shoot. At the time, Devin was upset because Yu Tsai had apparently citizen him and that was something Devin hadn’t been used to. But Bello went on to taunt Devin for that and even tried to rile him enough so that Devin would hit him.

Luckily, Devin kept his hands to himself but not a lot of people ended like Bello for the trick he tried to pull.

Thankfully, there were no eliminations on tonight’s episode of ANTM but in order to determine who will leave next week – the models all have to walk a runaway several yards off the ground. So tune in for next week to see if there will be a round two between Devin and Bello.