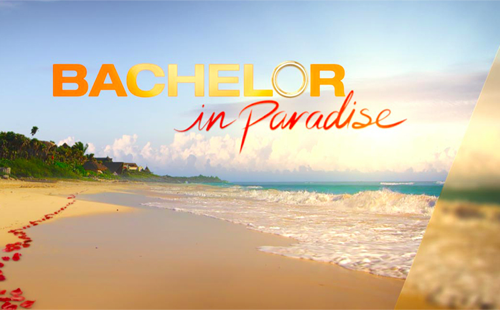 Bachelor In Paradise airs tonight on ABC with an all new August 2 season 2 premiere. We’ve got your recap down below! On tonight’s episode season 2 begins with the cast arriving on the shores of Playa Escondida in Mexico and getting acquainted at a cocktail party. But their revelry is soon interrupted by a mystery woman. Later, Clare Crawley from Season 1 shows up and shakes things up; and one lady becomes ill and must be taken by ambulance to a hospital. Also: the wedding of 2014 cast members Lacy Faddoul and Marcus Grodd.

On tonight’s episode per the ABC synopsis “looking for a second chance at love on the two-night season premiere of “Bachelor in Paradise,” the cast arrive one by one to their own private Paradise in the gorgeous town of Sayulita, located in Vallarta-Nayarit, Mexico. Welcomed by Chris Harrison, the cast quickly gets acquainted at a Bachelor-style cocktail party on the shores of Playa Escondida. The mood changes quickly when the Mystery Woman enters Paradise, and the cast is shocked to learn who she is. Breaking the tension, Chris Harrison interrupts to explain the rules of Paradise and one shocking twist. This week, the men will hand out a rose to someone they’d like to spend more time getting to know and the women who do not receive roses will have to leave Paradise forever. Then, he informs the group he has one more surprise in store.”

There is but one simple rule for the cast of Season Two of Bachelor In Paradise and it’s either they find love or they go home.

And that can come off as a harsh rule. Although to be fair, last season this show managed to match up one couple. The same couple that has gotten engaged and are even now willing to go through with their vows on national TV. So, to an extent, this show already has a better turnover than original Bachelor/Bachelorette franchise.

Season One had its happy ending and here’s to Season Two!

However the cast we were introduced to on tonight’s episode can be considered a little out there. See, and no offence to anyone, some of the people returning are the same ones that needed an extra bit of time during their original seasons to figure a few things out back in their everyday lives. And for the most part they don’t seem like the type to want to settle down. Or are ready for such a thing.

Take Ashley I. from Chris’s season. She spent most of her time on camera crying about one thing or another. And it looked she didn’t even know what to do with Chris when she wasn’t crying. So Ashley took look at her past season and realized she needed some help if she was ever going to make it through “paradise”.

And that’s why Ashley’s finally introduced the world to her sister Lauren I. Lauren is her sister’s exact opposite. Where Ashley is the nervous virgin, her sister is the confident woman just looking for some fun.

So Ashley I. had funnily enough brought reinforcements.

Meanwhile the others like Jared who was on Kaitlyn’s season decided to skip his alter-superhero shirt and simply be himself for once. Apparently he never got that much of a chance to do that when he was with Kaitlyn so he said this time around was going to be different.

And that appears to be sentiment that the fellow cast members all share. Ashley S. from Chris’s season was known as the onion girl and so she’s set out to show a little more of her personality. But Tanner who was on Kaitlyn’s season didn’t really speak about himself when he was being interviewed. In fact, all he could talk about was the women he was looking forward to meeting.

Namely Jade, Tanley and Samantha. Although Jade isn’t this big Playboy model that he’s probably envisioning. Jade who was on Chris’s season had initially been hurt when she was soon denied a rose after revealing her past. But post-show has actually helped her out.

People rallied around Jade and they took the sting out of her rejection. But Jillian who was on a Chris season took her rejection another way. See, instead of filling confident about who she was, she actually got breast implants in preparation for her time on Bachelor in Paradise.

And then there’s Tenley. She was a runner up on bachelor pad and she was in a committed relationship five years up until 2014. But the same guy that she had fallen in love with is now having a baby with someone he met almost right after her.

So you can clearly see that some of them aren’t prepared for this season of Bachelor In Paradise. Yet they arrived on time and at first they were ready to mingle.

The other ladies such as Carly, Claire, Juelia were just as serious about finding someone as everyone else. And originally the guys all gave them equal hearing. But then the trouble began. Like when the others questioned why Ashely I. brought her sister Lauren along.

And as it turns out, the sisters really were a package deal when it came to the rose ceremony. Chris later told everyone that even if one of the sister got a rose then that would automatically mean they would both stay. So Ashely was left feeling relieved. She now knows that she has all the time in the world to look for someone she’s interested while her sister “sluts” it up.

Thus the sisters were considered a nuisance by the other women. But as for the guys, they had to deal with JJ and Mikey. Both big personalities and both capable of ticking off everyone around them on their first day in Mexico.

In other words, they saved their “crap” for after the wedding. And the drama happened later on as they all began to drink.

Thing began to go wrong after Jade drew something of a crowd around her. All the guys simply wanted to be near her and Jade, without knowing how, had somehow captured their interests. So is this because she’s apparently magnetic or does their interest have anything to do with her past?

Anyways, as she was trying to thin out the herd, Ashley I.’s sister eventually had the first breakdown of the season

Now, normally, it would have been Ashely I. that would have been the first one to cry but like the others ladies were saying “who knew there was a drama gene?”. And if they had heard what Lauren told her sister then who knows whether or not they would have laughed or gotten into an argument with Lauren.

Not only did Lauren break down in tears because she said this whole thing was too much for her but she’s also took issue with being the youngest. Everyone, according to her, was old and she was only 24. So told her sister that she didn’t want to wake up next someone she’s regret.

But, like it was stated earlier, their rides were hitched together and that meant even if Lauren really wanted to leave – her sister was never going to support that decision. Especially as she already developed a crush on one of the guys. And wouldn’t want her sister dragging her away before she could see if anything happened.

Ashely who is normally very picky has a thing for Jared. So after she was done with her sister, she returned to the beach and then proceeded to do her best to solidify their “relationship” by having a nice conversation with the guy. Yet true to form, Ashley also broke down in tears when she saw him having a possible connection with Jade after they had talked.

And, in case you’re wondering, Ashely went into full breakdown mode. She started to hate on herself for not being as half as interesting as Jade. Then she told her sister that she would have picked Jade over herself if she was in Jared’s position.

So Ashley was kind of all over the place. She didn’t believe in herself or if someone could be happy with her and it didn’t help matters that she was picked to have the first date. If anything that just increased her nerves until once again she was crying and doubting if anyone would be interested in going with her.

Thankfully, however, Lauren was there for her sister. And she seems to be the one person that can bring Ashley out of her funk. So Ashley did get her act together in order to ask out Jared.

And Jared said yes. Which was surprising because the other guys didn’t think he would take Ashley I. up on her offer and then felt like maybe he was being nice when he decided to go. But JJ was sorta hoping Jared would turn down Ashely. Not because he’s interested in her, he simply wanted to do something besides sitting around the pool.

Though, there are two couples that look like they’ve made a connection. And I think you’ll be a little surprise about them.

On the first night, Kirk and Carly hit it off from the very beginning and were found snuggling together in the following morning. So that was a sweet romance to watch. But the real kicker was that Ashely S. appears to have found someone. The girl known for her unexplainable/ slightly ditzy antics looked to have finally found her match. And it’s Dan. Dan who didn’t get a chance to impress Desiree when he was on her season but who’s now found a reason to laugh with Ashely S.

And later, when Ashely had gotten sick, Dan had amazingly enough gone with her to the hospital.

As for that date that could have sent someone to the hospital out of sheer anxiety, both Ashley I. and Jared ended up having a fun time. So Ashley was hoping that could be the start of something. Yet was left upset when she returned to the resort and found out that Jade had been given a date.

Jade hadn’t even asked out or showed special attention to anyone but everyone was wondering if she would pick Jared. And so Ashley I. felt like Jade was going to steal Jared from her just when they had gone on a first date. But Jade was caught between two guys. She liked Tanner and Jared.

Thus she went with asking Tanner seeing as Jared had recently come back from another date. And Tanner wasn’t such a bad guy. He truly liked her and they enjoyed themselves.

But with Ashley S. out of commission, someone was needed to take her spot. And Clare from the last season of Bachelor in Paradise was the one that showed up by the end of this episode.