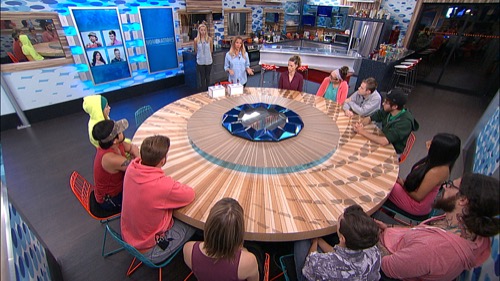 Tonight on CBS Big Brother 17 airs with an all new Thursday July 23, season 17 episode 14 called “Episode 14”, we’ve got your recap down below! On tonight’s episode another houseguest is evicted from the compound.

On #BB17 tonight, it’s the live eviction. Julie wonders if Audrey will walk out before she gets evicted since she didn’t show up for the veto meeting. Vanessa says it’s a first in Big Brother history. John wonders now what since Audrey isn’t around. Steve says they made history with her sitting out. Audrey’s sleeping in the have-not room and they wonder if she’s going to sit out the eviction too.

James says this is crazy and she just doesn’t want to be part of all this anymore. We see a flashback to before the veto meeting when Audrey had to go to confessional and she just laid there with a blanket over her and didn’t talk to the camera. Vanessa thinks that Audrey is having a total meltdown. The houseguests all talk about her and wonder what she’s trying to do.

Steve says he has no issues with Audrey as a person. They wonder if she will quit and says it takes less pride to do that. Austin says Audrey is happy to hide in the diary room for hours and she may be walking out on a once in a lifetime opportunity. Jason says he wants to see Audrey going out with her head held high and playing the game.

Audrey creeps out of the diary room later and Austin spots her. She goes off into the have-not room. Audrey thought she would be leaving from the diary room. James tells John that he doesn’t think Audrey can emotionally handle this game anymore. James fixes an omelette for Audrey and takes her a tray of food. Audrey eats the omelette. Looks like she’s making a pity play for attention.

Later, she comes out of the have-not room and goes back into the diary room again. They’re all wondering if she’s going to try and leave from there. She goes into the diary room and just sits there without talking. Julie says she has stayed and will now face a live eviction from her housemates. Julie greets the houseguests in the living room and she says she knows it’s a tense week.

She asks Jason about being in the Whack Street Boys. He says it was not as bad as he expected. Julie says the WSB have taken the country by storm and the Back Street Boys tweeted – hey Jason, Liz and John, we’re definitely fans of your moves. Julie asks them to perform live and tells them to take their places. They do their thing with a big finish. Julie says Audrey was open about her personal journey.

But then she asks what Julie’s family thinks about all this. Audrey says her family is all probably tripping because everyone in the neighborhood communicates. John asks her what her name was before. We see a look at her Georgia hometown and her family in a big nice house (it’s actually huge for rural Villa Rica which is a little bitty town out west of Atlanta).

Her parents talk about how much acceptance they’ve given her. Mireya and Mark, her parents, say they accept her and Mireya even helped choose her name Audrey. Her mom says they have a typical mother-daughter relationship. We see Audrey talking to Steve in the past and her saying she doesn’t like the word transgender and just likes female because that’s what she is.

Her family talks about how people are excluding Audrey from things. Dalton, her friend, says she doesn’t go around pissing people off in every day life. Dalton says he wishes she would have slowed down. Mark says his daughter told him she was going to go in and play hard. He says Big Brother was a big dream of hers. He says Audrey is a party of one and doesn’t care about being excluded.

Audrey shows up for the eviction ceremony. She makes her statement and says it’s been an honor to play and tells fans where they can find her on social media. She reminds everyone she’s the first transgender and was happy to have been embraced. She then says she knows they want her out and sys Merry Fricking Christmas.

Julie tells them that with 9 votes to evict plus one penalty vote. Audrey had a penalty vote against her for breaking a Big Brother rule. Likely they gave it to her for skipping the veto ceremony. Audrey gets a few hugs on her way out but when she hits the stage, she gets lot of applause. Julie talks to Audrey about her being the first transgender. She asks her about the immediate acceptance of this in the house.

Audrey says in her personal life, she keeps it quiet. She says she planned to come in and not play with emotions but she did. Julie asks why her allies turned on her and Audrey says it’s smart to work with the house. She says Vanessa had a reason to vote against her. She says she brought something to Shelli and Clay and they blabbed to Vanessa about it. Julie plays her goodbye messages.

Shelli is tearful and says she is her true friend and loves her forever. She wants her to grow from this instead of being hurt. John says she’s a good person but she just played it so hard and says she needed to pump the brakes. Jason says she got her come uppance and he hopes Da’Vonne is watching and laughing from the couch. Steve tells her she’s brave and has encouraged a lot of people.

Julie thanks her and shakes her hand. Then it moves into the HOH competition. They are playing Pop til You Drop. They hear a pop song that gives a hint to a BOB, POV, or HOH competition. If you get it wrong, you are out. The winner chooses the next two houseguests to play. The first song plays and it’s about Alice and Jason gets it right, Steve loses.

Britney was from season 14 and Julie says she was one of the funniest and most likable contestants. She is now married and has two kids. She says motherhood is glamorous. Britney says she’s just into this season so much and says she loves the characters. She says it’s been a long time since she was a fanatic. She says she loves Jason and they could have been the #TwinTwist. She says he’s so funny.

She says she likes Vanessa as a player and says she’s smart and reads people well. She says she loves Johnny Mac so much. She says they don’t know if he’s human or what but you love him. She says the twin twist went a whole different away and was surprised they didn’t make her a target. Julie asks who will win it and Britney says Vanessa has a great shot. She says either Shelli or Clay could do it.

She says there will also be a floater at the end and says she’s surprised that Jackie won HOH and says she’s a definite floater. Julie reminds us that if Liz and Julia make it through next week’s eviction, both twins will get to come in and play together.