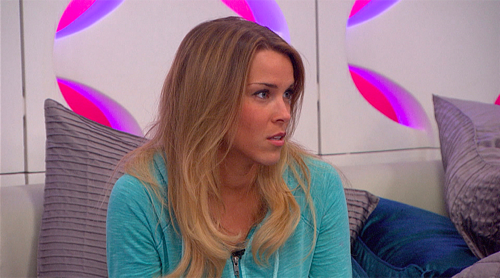 Tonight on CBS Big Brother 17 airs with an all new Thursday August 13, season 17 episode 23 called “Episode 23”, we’ve got your recap and spoilers down below! On tonight’s episode two houseguests are evicted from the compound.

On tonight’s BB17 as per the CBS synopsis “a vote determines who is evicted; the remaining house guests compete for the head of household position.  It is double eviction night we will get a full week of BB in one episode.”

#BB17 tonight is a double live eviction night! There will be a week’s worth of Big Brother played tonight and the two evicted will be the first in the season 17 jury house. We join the show at the end of the veto ceremony with Vanessa back doored. She is upset that she and Shelli are up together when they are allies. Shelli is feeling okay and says she just has to lay low since Becky told her she was okay. Austin says he doesn’t think Vanessa has enough votes to stay. Becky wants her out.

She needs four votes and then she can break the tie if it comes to that and send Vanessa home. Vanessa is upset and wants answers from Becky. She comes to confront her outside and asks why she was so harsh with her and says she made a deal with her. Becky says it’s enough and says she’s ending this and goes to walk away. Vanessa starts crying yet again and calls her a cold-hearted person.

Vanessa sits in bed with her sunglasses on and she asks Steve if she has his vote. He can’t save her and knows it but tells her that he will vote for her. He says she can’t burn any bridges with John. Vanessa says Steve is acting sketchy. Steve says he can’t lie to her and respects her too much. He says he didn’t promise Shelli anything. Vanessa sees this as a personal betrayal.

James gets into Liz’s bed and hides under the covers and startles her when she gets into bed. She screams and runs out and he laughs hard. Vanessa tries to talk James into keeping her. She says the way Becky is playing the game is bad for everyone then tells James about when Becky ran to Clay and Shelli and blabbed to them when James was HOH and messed up their plans.

James then goes to talk to his other people and they wonder if they can keep Vanessa and if Becky would hold a grudge. Julie tells the house guests that tonight will be a #DoubleEviction. Julie says out of the house doesn’t mean out of the game. She says it’s time to start the first live eviction with the voting and tells Shelli and Vanessa to make their statements.

Shelli says happy birthday Jason, she loves her family, she misses Clay and says they are all pushing each other out the door and she hopes that she gets to come back in the door. Vanessa talks about writing words in her journal back in law school. It’s about chasing dreams and it’s not about the destination but the journey. She says she loves Mel and her mom.

Julie says Becky told her she was safe and Vanessa was the target. Shelli says Vanessa is a good player and when someone tells you that you’re safe, you’re probably walking out the door. She says she thinks James had a lot to do with it and she feels that Vanessa has betrayed her and says people told her that it was her behind her breaking her and Clay up. Julie asks if she wants Vanessa to follow her out.

Shelli says she doesn’t know. Julie asks her about Clay and the age difference and putting a target on herself. Shelli says she came in determined to find a close ally male or female. Julie asks if she loves him and Shelli says it’s not like that yet. Julie asks what she would do differently if she gets back into the house. She says it depends on who is still there and says she’s rooting for John and Steve.

It’s now time for tonight’s #HOH. They have to watch video loops of themselves. There are 16 clips up on the wall. Liz realizes this must be for the HOH and starts studying them intently. Julie says Becky can’t compete and it’s called Getting Loopy. Julie reads off statements about those video loops and they answer true or false.

Steve is the new Head of Household – Julie sends them back inside immediately because Steve has to immediately nominate two house guests for nomination. Steve hates Becky will he nominate her? Very likely. But who will he put up next to her?

Steve nominates Meg and Jackie and says it’s nothing personal, it’s just a game. They take their seats and Julie says next up is live POV competition. John, James and Vanessa will also play in the POV competition along with Steve, Meg and Jackie. The game is slippery slope and they roll a bole down a ski slope with three holes on it and they have to get one ball in each hole then ring a buzzer.

They have to put the balls in the holes in order or they are out. After a set time, the one with the most balls in will win. John and James quickly get two balls then Jackie does as well. Meg also gets two. John wins it handily and he’s got the power of veto. Julie shoos them back inside the house and tells John to decide if he’s going to use the medallion. Steven and John go to talk in private.

The rest of the house guests wait for their fate. Back from the break, Julie starts the veto meeting. She tells John to make his decision. Meg tells John that she’s surprised she’s there and has played and honest and loyal game and has done no dirty work and tells John she really wants to stay and play and says she trusts him.

Jackie says she wants John to use it to her and says she has no dirt on her, hasn’t gone after anyone and won’t go after John. Then John says he doesn’t know who the replacement nomination would be and says since he can’t use it on himself, he’s going to not use it. Steve is really upset and walks away upset and says he needs a minute to compose himself. Was he trying to back door Becky and it failed?

What the heck was Steve thinking with that move? Meg and Jackie seem legit shocked. Meg then says she’s always up against a friend and doesn’t know what she’ll do without Jackie and says she has more game to play and asks them to keep her. She says she’s there to have a good time and plays honestly then says she loves Jackie.

Julie asks what the miscommunication was. She says Steve was told she was going to back door Austin when she put Steve up last time but someone lied to him about that. She says Steve was fed a lie to get him to put her up. Jackie says it was an interesting game with Jeff and says he was the life of the house and she took more of a backseat. Julie asks what she would do differently. Jackie says she played a loyal game. That’s it!