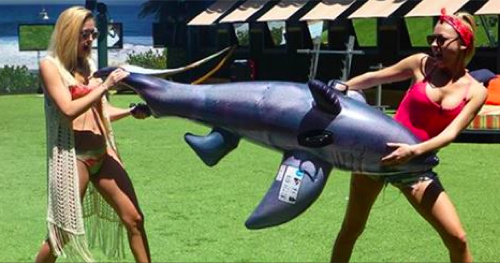 Tonight on CBS Big Brother 17 airs with an all new Sunday August 16, season 17 episode 24 called “HoH & Nominations”, we’ve got your recap down below! On tonight’s episode nominations for eviction are revealed. To see who won the week 8 PoV competition check out our CDL spoilers right here!

#BB17 starts right after the second eviction. Meg is upset that Steve took her out and doesn’t know what’s going in his head since he never talks game to anyone in the house. Becky is upset and says she doesn’t know what happened and why Steve did that. James also is clueless and says someone must have lied to Steve about Jackie for him to send her home like that. Steve didn’t want the HOH and tried to throw it. He says Jackie was the only person he heard bad things about – Vanessa told him that Jackie was targeting him and now he thinks Becky would have been better.

He thinks he just lost Big Brother and feels like he wants to throw up. Meg and James wonder why he did that and he says he doesn’t think Steve just came up with that. He says they’re the underdogs and need to play dirty but Meg says she doesn’t thinks he can. Austin comes and tells them he’s sorry. However, he’s happy because it’s great for his game that Jackie is gone. Vanessa comes and hugs Meg and says she doesn’t know why Steve did what he did. Austin plays it cool.

Steve cries on the twins who hug him. Julia knows that he kept them safe and now thinks they have to keep him safe. He cries and they tell him he’s not a bad person and it’s just a game. They tell him that at least it’s not him at the door. He’s really bawling. Vanessa comes in and she says she’s had to send someone home twice. She says no one took it personally. He asks for them to leave him alone. Once they go, he stops crying and says he’s 50% acting. OMG! What a playa!

Becky talks to James and Meg and says they have just three and they’re outnumbered. John comes in and asks if the tears are over. John says he felt like he couldn’t use it because one of them would have been nominated. They wonder if Steve will work with the other side of the house and John says the will pull him in but says they can get him back. James says Steve is being pulled by both sides and John says they have to try and get him.

Becky says they have better players and the other side will be scared of them because they can win. Steve comes in and asks if they want to talk. He tells Meg he wasn’t prepared to win HOH and didn’t have noms in mine. He says Jackie was the only person he heard ever came after him. Meg says Jackie never had any intentions on coming after him. They ask where it came from and guess Vanessa. Becky says it works in his favor that it’s Vanessa to blame.

Meg and Becky says they can bury the hatchet and work together. Meg wants to win HOH to get revenge for Jackie. It’s a #BBEmojis challenge for #HOH. There are emojis modeled on former house guests. Steve hosts the competition. It’s head to head tournament style. There is a question with three possible answers. It’s James vs Meg, John vs Austin, Vanessa vs Julia and Becky vs Liz. Meg wins then John wins. Austin and James are both out. Julia wins then Liz. Vanessa and Becky are both out of it.

Meg vs John is next. John wins it and Meg is out of it. Julia vs Liz is next. Julia buzzes in but gets it wrong. Liz wins. Now Liz faces off against John for #HOH. Liz rings in and wins it. James is totally bummed and says his back is against the wall again. Becky is terrified and says Vanessa will be in the twins’ ear telling them to send her home.

Austin is thrilled and says this can’t be any better. He says she is the night in shining armor when he wanted to be. Becky and Meg are bummed and says they thought Johnny Mac had it. Becky says Vanessa gets other people to do her dirty work like she did with Steve. Becky says he made a big move and didn’t get her target out and doesn’t doubt she will be the next one out. Vanessa dances around with the twins and Steve comes in. Liz tells Steve he has nothing at all to worry about.

Vanessa tells Liz she needs to go after Becky but Liz says she can’t put her up like that. Johnny Mac comes in the room to get something and they have to stop their conversation. James and Austin talk about Titanic and James says it’s the best movie ever. They decide it was greedy for Rose not to share time with her honey on the piece of wood. Liz says she thinks Meg and John then she back doors Becky. Austin says there are not a lot of pawns left.

Autsin suggests putting Becky and John up. They talk about back dooring James. Vanessa tells Austin and the twins they are looking at final four. She suggets #AustinsAngels and they pose like the show poster. Becky comes to Liz and she says she knows that she sees Vanessa as a threat. She wants to try and convince them that she’s a threat. Becky says her hands got dirty and Austin asks about a plan to back door him. He asks if Vanessa knew about it and she says yes.

Becky says Vanessa moves to what’s best for her game and says she will go against you. Liz, Julia and Austin are mind blow. Liz is wondering if she can trust Vanessa and has to think about this. John throws a beach ball and whacks Meg in the face then laughs and says he wasn’t trying for a head shot. James and Steve are the new bromance. James says he was hanging with him at first for strategy but now Steve is growing on him.

We see them playing chess, working out and even showering side by side. Vanessa comes in and finds Steve with Austin and the twins. She’s proposing an alliance name and they argue over it. Liz says she’s going to keep things status quo while she thanks about Vanessa. They decide on #TheScamperSquad. John asks Vanessa if he’s going on the block and she says he’s not the main target. Vanessa tells John that he should go ask or she can ask on his behalf. John says no and that he’s going up.

Vanessa says she needs to know where his loyalties are and says if she talks to him, he can’t tell Becky. He says he won’t. She asks if he wants to know how to improve his game and says that he has some unfounded feelings about him. He says he felt like she was bullying him to make him throw some people under the bus. Vanessa gets upset and says that was not what happened. John says she’s the one who brought it up. Vanessa says she doesn’t like the word bully.

Vanessa asks if he has any animosity towards her over that situation. John says he doesn’t like when she cries and yells at people. Vanessa is trying to pull him into an alliance but he’s trying to make her target him. Vanessa says she’s sorry he feels that way and says it won’t happen again. She gets snotty and walks out right up to the HOH room. She knocks on the door and comes in and says she has dirt on John. He says John asked if Liz is going to put her up then gave her attitude.

John follows her upstairs. Vanessa asks if she can finish her conversation. John says they were just talking and then she came straight up her. Vanessa says they’re fine and he says he’s worried but leaves. Liz is now even more suspect of Vanessa who says John may just be crazy. It’s time for #Nominations. Liz wonders who she should nominate. Meg is really worried since Jackie is gone and their numbers are down. Becky says she hopes that Liz will listen to what she told her about Vanessa.

Liz calls everyone for the nomination ceremony. She nominates Becky and Johnny Mac. Liz says John is a veto superstar and is a competition beast and says Becky is great at all she does too then says she’s sorry. John says if he comes off the block, Vanessa better watch it. Liz says anything can flip after veto.