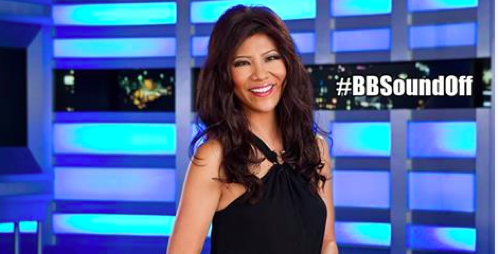 Tonight on CBS Big Brother 17 airs with an all new Sunday August 2, season 17 episode 18 called “Episode 18,” we’ve got your recap down below! On tonight’s episode nominations for eviction are revealed.

Last time on #BB17 we were watching the first individual HOH competition. Meg wants one of her alliance to win since the stakes are so high. The wall leans way forward and they are barely hanging on. Then the water starts coming down. Vanessa is really worried about the others coming after her for sending Jason home. Austin says Liz promised him a passionate kiss if he wins HOH. She said just a kiss, the passionate part is his imagination.

Becky says winning is critical this week. Then the birds come at them again. James is determined to win. John mocks the synchronized attack of the bald eagles. After 20 minutes, the wall goes forward again and Austin is hurting. Then the foot hold starts to withdraw into the wall. James asks if anyone wants to cut a deal. Now they start splattering them with some sort of mud crap. It’s supposed to be bird poop. Then the wind starts up.

Steve and Austin both tumble off the wall and Austin says he has to kiss the kiss goodbye. The wall leans out really far forward and Julia and Meg both fall off the wall. Vanessa is worried about her alliance falling off the wall. After nearly an hour, the punishment continues. Rain and lightning pour down on them. Shelli’s arms are shaking. The wall tilts and Clay tells her to hangin in there. Then the eagles are back to dive bomb them. John thinks this is awesome.

Everyone hangs on and Liz is trembling head to foot. She says she, Clay and Shelli have to protect them. The wall tilts again. Jackie falls. James says it’s all on him now. Liz tumbles off. Vanessa is really sweating now. Austin hugs Liz. James is struggling and cops a squat to rest for a minute. He’s playing it up and says he’s playing mind games with Clay. After 1 hrs and 43 minutes, Becky is dying. She goes down and that leaves James, Clay, Shelli and John.

Clay tells her he can’t do this and she tries to get him to suck it up. Clay falls. That’s James, Shelli and John. Vanessa is determined that James can’t win. James isn’t sure what John will do so he has to win this. The cold rain starts up again. Shelli looks pretty rough – she’s shaking hard. Shelli is tired and doesn’t know if winning HOH is a good idea since it would be her third win. Shelli tells them she did this twice and just wants their word not to nominate or back door her or Clay.

Vanessa is really mad and James agrees. He okay and then says he won’t nominate John either. John takes a dive after that and then Shelli jumps down. That makes James the new HOH and first individual #HOH. James is thrilled to be #SoleHOH. Austin worries that James could back door him. Shelli thinks she can trust James since she made the deal in front of the entire house. James is ready to take control. They all look at Julia’s new photo on the wall. Julia is worried about James.

She has gunned for him in previous weeks and worries he may come at them. Meg tells James she’s thrilled and says it’s like a win for her. She says they have been the underdogs every week and keeps having to send her friends home. James says Jason will be happy right now and says the others must be crapping themselves. He says it’s ready to fire a shot back at them and rattle their cages. Jackie comes in happy and they all talk about Shelli.

James says he wasn’t going to let them take him out like that and says they have to fight back. Vanessa chats with Austin and says she’s not very happy. She says she could be going home since she put James on the block and sent his buddies Jeff and Jason home. Liz and Julia chat with Shelli. Julia says Austin has betrayed her and she has to talk to Liz about it. Julia asks her why Austin would do that and Liz says Jason twisted it and Austin wouldn’t do that.

Julia says she doesn’t believe that and Liz says they are in a bad way and have to make a deal. Austin comes him and says it was a disastrous comp. Austin says Jason got what he deserved. Julia asks why he told Jason her name. Austin says it’s not shady. Austin says he has to explain himself and do some damage control. He says he said too much but was not trying to get rid of her. She asks how people knew her name was Julia. Liz says he was just trying to save them.

Austin lies and says Jason manipulated what he said. Julia doesn’t believe anything Austin says and thinks her sister should not trust him. Shelli says she needs to talk and tells Vanessa she’s upset with herself. She says she was thinking one of them needed to win but she didn’t want to be HOH since she’s won twice before. Vanessa says she should have pushed through. Then she says she couldn’t try to save Vanessa too because it would expose the alliance.

Then they start talking about the twins being targeted. Shelli then goes and tells Clay she hopes James won’t target Vanessa. Austin comes in and says Julia is angry at him and asks if they’ll talk to Julia and explain that he wasn’t after her. He leaves and Clay says they should go tell James that he should send Austin or the twins home. Shelli says they’re going to lose one of them and it will be her fault. Clay says she doesn’t owe them anything and this is not her fault. She calms down and they hug.

Shelli asks Clay if he was in the diary room. Then we see a montage of Clay talking nonsense. John thinks Clay has taken too many hits to the head playing football. James hides behind the bathroom door and scares Steve who falls on the floor in terror. James helps him up and Steve says well done. James, Becky, Jackie and Meg talk and James talks about Shelli cutting deals. He says if she thought she was safe, she wouldn’t have done that.

Jackie says they should go after Shelli and Clay after what they did to them. Becky says that puts a target on James. James says they need to do to them what they have done to them in the past. He wants to target Shelli then wonders if they need to back door her. Meg suggests Austin or maybe Vanessa. She says maybe Liz. Meg says no one can know about this and says he needs to tell others something else. Becky comes in to talk to Shelli and Clay.

She tells them they need to stop looking sad so they won’t put them both up on the block. She says they need to be happier or they will be put up and says James, Jackie and Meg are talking about putting them up. Shelli is upset and Clay says they need to figure this out but she just wants to go eat cookies. She says he won’t let her walk things off. He tells her not to get mad and says they need to talk to James and need a game plan. Shelli says she wants to talk to Vanessa and put a target on Austin.

Shelli says she’s mad at herself for not pushing to win HOH. Vanessa comes to talk to James because she’s terrified. Vanessa says she had nothing personal against Jason. She says she knows that James needs to make a big move and says she’s the third wheel to Clay and Shelli. Vanessa says she will support him whatever he wants and says if he doesn’t put her up, if she makes HOH again, she will keep him off the block and another person of his choice.

James knows she’s a strong player and this could be good for him. Shelli and Clay go to talk to James to see if he’s going to break his word against him. James says he’s working on an elaborate plan. Shelli wants to know if the deal is still good and James asks why she’s asking. Clay says they’re being targeted because people think they were targeting Jason. Shelli says she felt so bad about it and Clay says it was Jason or Austin.

Shelli says Austin found out he was the target and then campaigned. Shelli says it was Austin that started all that himself. James thinks they’re lying about being involved with Jason’s ousting. James tells them it’s in the past but he’s thinking about what he wants to do. He wakes up late after tossing and turning. He talks to Meg and says he’s thinking of just throwing Clay and Shelli on the block. He says if you backdoor one, they will both still be pissed and need to be broken up.

He says he’s willing to take the heat and Meg says most people would keep the noms the same. He says it’s what he has to do and they won’t see it coming. Clay and Shelli also lie awake wondering. It’s nominations day and James calls them for the ceremony. Everyone looks miserable. James reveals that he nominated Clay and Shelli. She’s not happy. He says he nominated them because they blindsided them and says it’s his discretion to break the deal.

Shelli says everyone can know that James is not good for his word. She says she and Clay had nothing to do with Jason going up on the block last week and anyone that wants to hear the true story, can come ask them. Clay says James stooped low to nominate them side by side. He’s furious and says maybe they’re naïve to think there are people there that would play the game like that. James says the next part is to make sure that the noms stay the same. Vanessa thinks about how it was bad game play for them to throw her under the bus.