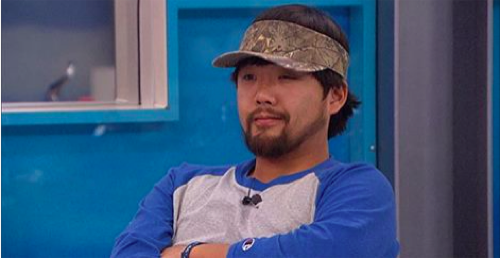 Tonight on CBS Big Brother 17 airs with an all new Thursday August 6, season 17 episode 20 called “Live Eviction & HoH”, we’ve got your recap down below! On tonight’s episode another houseguest is evicted from the compound.

On #BB17 it’s live eviction night. Will it be Clay or Shelli that gets the boot? Clay says James not using the veto was kicking him while he was done. The two agreed that they won’t campaign against each other. Liz says this is awkward and she’s glad it’s Clay and Shelli on the block and not she and Julia. James says Shelli is the clear target and he hopes his team is on board to get her out of there.

Clay and Shelli cuddle in bed and she says they have four days left so they should make them good. Clay says he doesn’t trust anyone but she says she trusts Vanessa. Awkwardly, Vanessa is lying in the next bed over looking uncomfortable. Vanessa wants to keep Shelli and says that’s better for her game. Shelli wants to save herself but then cries and says she doesn’t want to hurt Clay.

They whisper and he says everything happens for a reason but Shelli insists this did not have to happen. James goes to talk to Austin and says Shelli and Clay told him about his Judas character voting crazy. Austin tells him that he was never a target and James says they told him that Austin told Liz to put him on the block. Austin is mad and thinks Shelli and Clay are classless for blowing up his game.

Austin tells James that he and the twins are on his side. Austin then goes to talk to Vanessa and the twins. He tells them what Shelli and Clay said to James about them and their alliance. He says James told him he just wanted him to know. Austin is exaggerating since James never mentioned the alliance. Vanessa says Shelli and Clay know too much so they have to be careful and she calls them fools.

Vanessa is angry that Shelli and Clay sold out their alliance to James and she says she needs to mend fences for her own game. Vanessa then goes to Shelli and says James told Austin that she and Clay told him about the alliance. Shelli says all she told James was that Austin was the one who wanted James on the block. Vanessa tells Shelli she will campaign to try and save her from eviction.

Liz and Julia talk and they talk about who is the bitchier twin. Shelli goes to talk to the alliance to try and mend fences. Shelli says James backed her against the wall and says she fell for it. The twins ask why she would talk and she says she was played and says she owns up when she does something wrong. Austin doesn’t believe her but says he won’t ruin the alliance over this.

Vanessa says they have a long history and shouldn’t give this up. Liz says they saved her ass and Shelli says she loves them. Shelli hopes they will vote to keep her this week. Clay and Shelli debate whether honesty or lying is best – he says lying is. Shelli says they have been together 24/7 for six weeks now and says they want to continue the relationship outside the house. We see their #FirstKiss.

Shelli says it was worth the wait. Liz comes out and interrupts and he’s annoyed. He says she had to see them. James asks everyone how they plan to vote tomorrow. He says he wants Shelli out. Austin says that works for him. Austin wants to campaign to James to keep Shelli. Vanessa says she has to prioritize herself and James says Shelli is a bigger threat.

Vanessa says it doesn’t matter if the target will be the other one next week. James says you don’t want a woman scorned in the house. Vanessa says no one should feel pressured to vote one way. James says if Shelli stays they can just vote her out next week. Jackie debates and says Shelli is the bigger threat. Jackie says Vanessa sent Jason and Jeff home and she doesn’t think she wants to send Shelli home at all.

Shelli leaves and Jackie tells James that something is up and Vanessa is trying to keep Shelli. Jackie says she thinks Austin wants to keep her too. She says they can’t count on Vanessa or Austin and can’t trust them. She thinks Vanessa is ready to screw them again. James says worst case is Shelli stays and they can’t trust anyone. Julia and Liz talk about voting and one wants Clay out and one Shelli.

Vanessa comes in and sits with the twins. Then Austin comes in. Vanessa says she’s confused and says if Clay is there, the other alliance will work with them. Liz says they need to get Shelli out since she’s stronger. Austin says Shelli sold him out this week and gave away HOH. Austin doesn’t want to piss off the others by keeping Shelli. He says he could flip a coin and it’s 50/50.

Julie talks to Cody and Derrick. We see them get together. Cody says he and Derrick are like brothers now. They see each other once a month and talk almost every day. Derrick says he likes how they talk and Cody says it’s nice to talk and not talk Big Brother. Derrick says he gets recognized for being on Big Brother and he bought a hot tub and a deck. He says good things happen to good people.

Cody says it’s crazy how willing the guys are this season to give up their game for the girls. Cody has to pull off his shirt and Derrick says he may have to compare him to Clay. They talk about girls and they like Shelli and Meg. Cody says Becky looks good and he can’t believe she got hit by a train. It’s almost time for voting.

Time for live voting. Shelli, Clay and James don’t get to vote. They make their statements. Clay says he needs to thank God and says it’s been a blessing to be there and says he’s already a winner and says not to vote for Shelli. Then it’s Shelli’s turn and she tells Clay he’s her heart and her rock. She says she can’t wait to live in the real world with him. (Unless Meg has something to say about that).