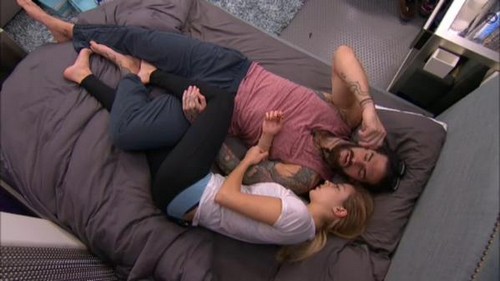 “Big Brother 17” spoilers are in and it is getting difficult to predict which way the voting will happen because John is a wild card – and very unpredictable. Right now, the live feeds are off so this is the final Monday life feed report possible. The house is experiencing a taped eviction – and likely a Head of Household comp. When the feeds return on Tuesday evening at 9 pm Eastern Time, the final four will be revealed. At this point, it is anyone’s game.

Vanessa – current Head of Household – nominated Steve and Johnny Mac for eviction. John won the golden Power of Veto securing a spot in the final four. Vanessa had to name a replacement nominee, placing Austin on the block. Liz and John will be the sole houseguests voting for this eviction. In the event of a tie, Vanessa will vote to break it.

On September 13, the live feeds were all about Johnny Mac. He hadn’t decided how he wanted to vote yet. On one hand, he saw the advantage to voting out Steve, leaving Austin in the game. He believes that Austin would target Vanessa to get her out next. On another hand, he can see the advantage to evicting Austin out of the game.

Two days ago, he promised Austin he’d vote to keep him. He told Austin that keeping Steve worried him. He has a concern that Steve and Vanessa are secretly working together (and they are). It isn’t that easy either because keeping Austin is a huge gamble too because he is loyal to his showmance, Liz. It will be a tough decision for John – a man who has tried to plan the game without picking a clear side.

Overnight, John told Vanessa he was ready to make a huge move. It seemed clear he was not talking about voting out Steve, but Austin. The part that concerned him was that he felt like Vanessa might have been trying to trap him. Imagine Liz votes to evict Steve, and he votes to evict Austin. Vanessa will break the tie, and his fear was she would vote out Steve – leaving Liztin angry with him. Vanessa assured him she could be trusted and wouldn’t do that, but he still was worried when he settled down for the night. Nobody can trust Vanessa!

John told Vanessa, “I hate you all, and you all have to go. I don’t feel bad about having to turn on anyone.” He put her on notice that he didn’t care who left; he was here to play the game. Is it possible that John was playing the game along, and part of his plan was to keep a low profile until he needed to win competitions? The fun part about “Big Brother” is there are multiple ways to win the game. Don’t forget to check back later for juicy “Big Brother 17” spoilers and updates!