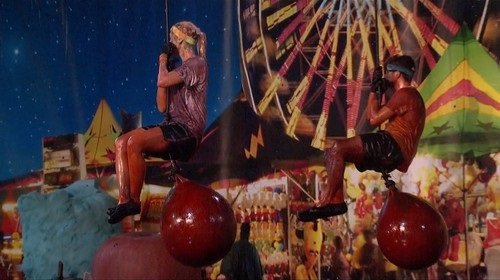 “Big Brother 17” spoilers are in: the first leg of the FINAL Head of Household competition of the summer played out on the live feeds last night. The endurance competition was a tough one; however, Liz, Vanessa, and Steve held on for over four hours. They had to sit on a disc while holding on to a rope while they were swung every direction like ragdolls. The houseguests were slammed into a wall, repeatedly and dipped into a Jell-O looking liquid. At one point Liz complained the liquid was irritating her skin. So, who won the first leg of the comp?

They held on for over four hours. Steve fell first after losing his shoe in the gooey liquid. He lost focus and slipped right off the disc into the liquid. Vanessa tried to make a deal with Liz, but she was hesitant. After some time passed, Liz complained she couldn’t feel her thighs and was extremely worn out. Vanessa told her she could fall, she’s safe. “Do you swear you are taking me to the final two,” she asked. Vanessa replied, “I promise!” Liz dropped – handed the win to Vanessa.

After the grueling competition, Vanessa told Steve and Liz that she will not be able to move tomorrow. She said, “Everything hurts. We were up there a long time. And, I am much older than you guys.” While Liz is in the shower, Vanessa tells Steve she knows he can win round two. “We are still taking each other to the final two, right,” Vanessa asked Steve. He nodded his head but didn’t look convinced.

When Liz gets out of the shower, Vanessa confirms to her; she will evict Steve if she wins the final HoH. She explained she cannot win against him. Typical Vanessa, she was making deals with both people, ensuring she will be in the final two no matter who wins the competition. She explains that Austin was plotting against Liz in the house, and Vanessa did her a favor to evict him (yes, she really said that). Vanessa implied since she won the first part of the Head of Household that makes her the current HoH right now (it doesn’t).

The next step in the HoH completion is for Liz and Steve to face off. The winner of the comp will face off against Vanessa in the final round. The third (and final) round winner will choose who they want to take to the final two. At this point, anyone can win the final competition. If Vanessa wins final HOH, she will have to pick a side. It seems like she has quite decided who is best for her game in the end. Vanessa has kept her options open. One thing is certain; she will not throw the last competition, and it is anyone’s game at this point. The second leg should be played by Saturday – maybe sooner. Check back later for more juicy “Big Brother 17” spoilers, rumors, and updates!