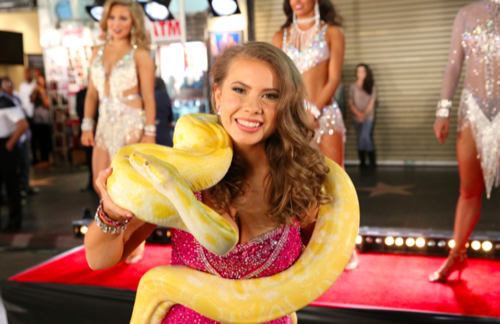 Tonight on ABC Dancing With The Stars returns for a seventh week and Bindi Irwin and his professional dancing partner Derek Hough danced an Argentine Tango routine to “Cry Little Sister” from Gerard McMann. On tonight’s episode the eight remaining couples will perform an individual Halloween-themed routine in addition to a competitive team dance.

Judges’ comments on Bindi’s Week 7 Argentine Tango: Carrie Ann: “All hail the queen of darkness, I never in a million years thought that Halloween night you would shine your brightest.” Julianne: “You guys are on a whole other level together, this thing that was so intense. That was something so strong and deep rooted.” Bruno: “That was an Argentine Tango master class, spell binding magic.”

Watch the video below and let us know what you think, do you agree with the judges comments? Do you think Bindi did enough to avoid elimination tomorrow? Sound out in the comments and let us know your thoughts?