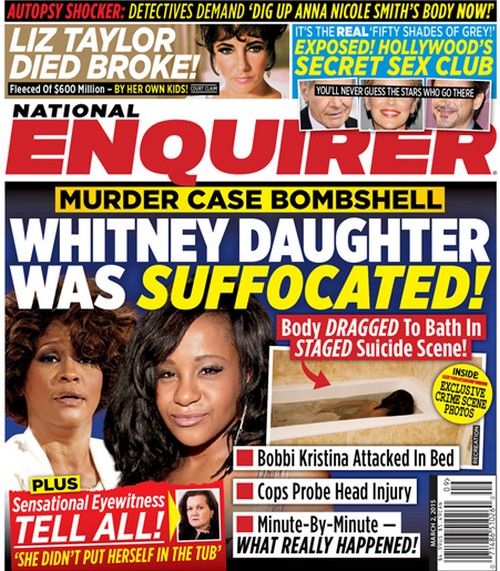 Bobbi Kristina Brown is currently lying in a hospital bed on life support – and has been since she was found unresponsive in her bath tub on Saturday, January 31st. As details of the tragedy continue to emerge – it is becoming increasing clear that the daughter of Whitney Houston and Bobby Brown may have been the victim of foul play. General consensus among the media is that Bobbi’s “husband” Nick Gordon may have been responsible for her drowning.

According to a bombshell new report in this week’s edition of National Enquirer, the police are currently investigating Bobbi Kristina’s drowning as an attempted murder – and the number on suspect is Nick Gordon. Nick Gordon and Bobbi’s friend Max Lomas is the one who discovered Bobbi unresponsive in the bath tub and alerted her husband, and the pair performed CPR on Bobbi until paramedics arrived. Since then Max Lomas has lawyered up and met with Georgia prosecutors, further fueling rumors that someone tried to murder Bobbi Brown. What a lot of people don’t realize is that Nick Gordon and Max Lomas were not the only ones in Bobbi’s house that day – so was Max’s 18 year old girlfriend Danyela Bradley.

The National Enquirer sat down with Danyela’s grandmother Marlene, and she dished all of the details surrounding Bobbi Kristina Brown – and revealed that Bobbi’s drowning was in no way an accident. Marlene Bradley revealed, “Danyela insinuated to us that she doesn’t think it was an accident. She said the police are looking at Max as a suspect because of his past but she said, ‘He didn’t do anything but save [Bobbi Kristina].’ She said, ‘Nick was the last person to see [Bobbi Kristina] alive!’ Danyela said she knew for a fact she hadn’t been in the bathroom for long. ‘It makes no sense. [Bobbi Kristina] was completely naked. She was in a tub of ice cold water. “I can tell you she didn’t put herself in the tub. No woman would take a bath in a tub of cold water. She would be dead if it were not for us. Max and I gave her CPR.’”

The National Enquirer also goes on to reveal that the police are looking for another witness, who they believe was at Bobbi Kristina’s house prior to her drowning because of a photo that she posted on Instagram moments before she was found unresponsive in her bath tub. This coincides with other reports that the police have been interviewing neighbors about a person they seen fleeing from the house seconds before the ambulance arrived.

So far no arrests have been made in Bobbi Kristina’s drowning – but Nick Gordon has been advised by authorities not to leave Georgia. Have you been following Bobbi Kristina’s case? Do you think Nick Gordon attempted to kill his wife? What do you think of Danyela Bradley’s account of what happened? Is it creditable, or his family just trying to cash in on the tragedy and sell a few stories? Let us know what you think in the comments below!