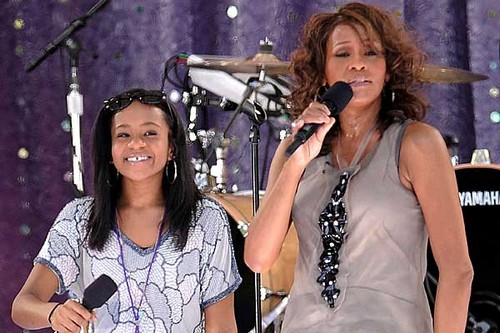 Bobbi Kristina Brown‘s organs are failing and her body is shutting down – as a consequence she is dying even while on life support – her damaged brain is unable to handle the requirements placed upon it. Recently Bobby Brown had his attorney issue a statement that his daughter, Bobbi Kristina Brown, wouldn’t be taken off life support on the anniversary of the death of her mother, Whitney Houston. In fact, many members of the Brown and Houston families seemed to indicate in interviews that Bobbi Kristina was “improving” and “progressing.” However, other reliable family sources are finally admitting the truth about Bobbi Kristina: she’s fading fast.

According to TMZ, reliable family sources say that in the end, it won’t matter whether Bobbi Kristina is on life support or not. The source close to the Browns says that initially Bobbi Kristina did show improvement, which was reported across various news outlets. She responded well to a few tests and doctors saw a brief spike in brain activity. Since then, Bobbi Kristina has taken a turn for the worst. Multiple organs are reportedly shutting down and the doctors have said there’s nothing that they can do. Bobbi Kristina is dying and the Brown and Houston families are preparing to say goodbye.

Bobby Brown remains committed to keeping his daughter alive as long as possible. Some of the Browns and Houstons think it’s best to just let Bobbi Kristina go now, but they’re respecting his decision. Perhaps her slow decline over the past two weeks will somehow make it easier for Bobby Brown to give doctors the OK to pull the plug. The Brown and Houston families have watched Bobbi Kristina slip away from the vibrant, young woman she once was and are now moving toward the grieving process.

Bobbi Kristina Brown was found unresponsive in a tubful of water at her Georgia home. She was likely without oxygen for several minutes, which typically leads to diminished brain function. Even on life support, it’s not likely that Bobbi Kristina will last much longer as her body begins to fail her. The Browns and Houstons continue to request prayers and positive thoughts for Bobbi Kristina.