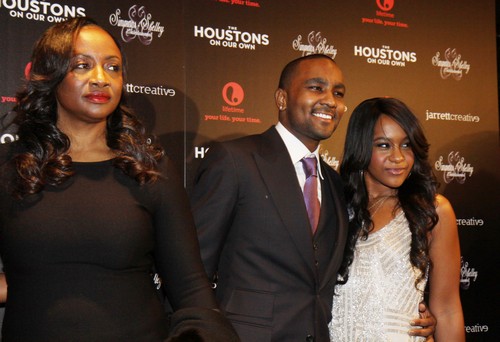 Bobbi Kristina Brown is on life support at DeKalb Medical, a long term acute care facility near Atlanta. On January 31 the daughter of Whitney Houston and Bobby Brown was found drowned in her bath tub and rushed to and Atlanta hospital – since her arrival she has been unresponsive and on life support machines to keep her alive. In March the doctors at Emory University Hospital informed Bobby Brown that there was nothing else they could do medically for his daughter, and he was faced with the decision of taking her off from life support or moving her to a long-term facility like DeKalb and waiting for an unlikely miracle.

When Bobby Brown was given the grim prognosis and faced with daunting task of deciding whether or not to remove his daughter from life-support, Cissy Houston and Pat Houston held a family meeting and tried to bully Bobby Brown into taking Bobbi Kristina off from life support. Although the Houston family claims that they just “want this nightmare to be over,” rumors are that the real reason the Houstons want Bobby Brown to take Bobbi Kristina off from life support boils down to a $20 Million inheritance.

When Whitney Houston passed away she left her daughter Bobbi Kristina a $20 Million inheritance, and if anything were to ever happen to Bobbi – the money is to be split between Cissy Houston and Whitney’s brothers, one of whom is married  to Pat Houston. In the event that Bobbi is taken off from life support and allowed to peacefully pass away, Cissy and Pat Houson become very wealthy women.

Of course Cissy and Pat want Bobby Brown to take his daughter off of life support, literally every day that she is kept alive by machines at a top level care facility they are losing big money and are kept from cashing on Bobbi Kristina Brown’s huge inheritance. Cissy Houston made it crystal clear last week she was okay with her granddaughter dying and said so in an interview. Bobby Brown remains hopeful that his daughter will miraculously wake up and he visits her on a regular basis at DeKalb Medical Facility. So far Bobby has not shown any sign of giving in to Cissy and Pat Houston and is not considering pulling the plug on his daughter.

Do you think that there is still a chance that Bobbi Kristina could wake up? Are Cissy Houston and Pat Houston being greedy or sensible? Let us know what you think in the comments below!