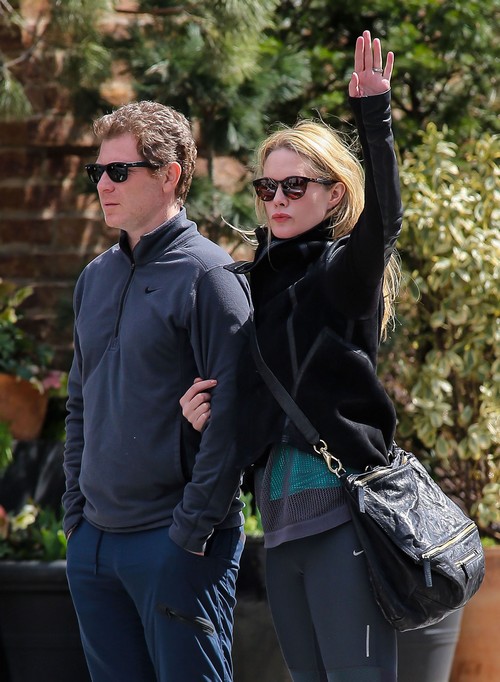 Bobby Flay and his wife, Stephanie March, have separated after ten years of marriage. US Weekly confirms the separation, and adds that the couple split up a few weeks ago. Bobby has since moved out of their shared NYC apartment, even though it’s not clear whether the split is amicable or contentious.

There were hints that the couple was facing issues, especially since Bobby and Stephanie did not spend their tenth marriage anniversary together. Apparently, Bobby was actually at the Food & Wine Festival down in Florida, which obviously meant there was trouble in paradise.

Plus, Bobby Flay even admitted that his wife wasn’t happy with his working schedule, telling CBS Sunday Morning [last December], “I think she’d like me to work a little bit less, for sure. That’s never going to change, you know?”

Obviously, as a Food Network chef, Bobby Flay is going to be insanely busy, but Stephanie March is equally as well known for her work on Law & Order: SVU. It’s a little strange that she would think that he’s working too much, when her schedule is probably just as rigorous – just at different times.

Then again, we really don’t know why these two decided to get a divorce after ten years of marriage. I mean, getting separated after a decade of marriage isn’t uncommon in Hollywood, since temptation and disaster strikes at all ages. But it seems like Bobby Flay and Stephanie March are having a reasonably amicable divorce, especially since neither one of them has gone public with their ‘side’ of the split yet.

What do you guys think about Bobby Flay and Stephanie March getting a divorce after ten years of marriage? Do you think there’s any chances of a reconciliation, or is it much too difficult to tell this early in the game? Let us know your thoughts in the comments below.

Update: Bobby Flay has just filed for divorce and TMZ reports that Bobby has a prenup signed with Stephanie March that leaves him with a much better financial outcome!