Bones Recap – The Brother in the Basement’: Season 11 Episode 2 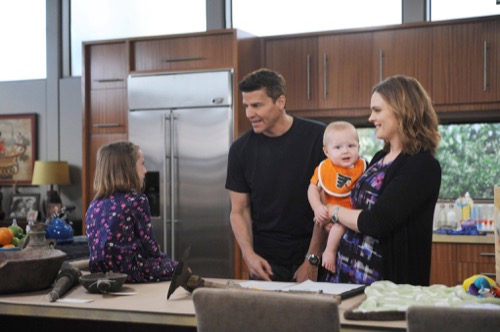 Tonight on FOX Bones returns with an all new Thursday October 8, season 11 episode 2 called, “The Brother in the Basement,” and we have your recap below. On tonight’s episode Booth (David Boreanaz) is still missing, but the team learns that Agent Miller has hidden information about his whereabouts and physical state.

On the last episode, Booth went missing as season 11 began six months after he and Brennan left their careers behind, but a case with ties to the couple pulled Brennan back into the world of forensic analysis, which brought her into contact with a member of Booth’s family and Arastoo Vaziri, who’s taken the lead at the Jeffersonian in her absence. Meanwhile, the FBI investigated Booth’s disappearance, but one agent’s tactics were bad for the team’s morale. Did you watch the last episode? If you missed it, we have a full and detailed mid-season finale recap right here for you.

On tonight’s episode as per the FOX synopsis, “Booth is still missing, but the team learns that Agent Miller has hidden information about his whereabouts and physical state. Meanwhile, a digital forensic scientist helps Angela try to decipher information pertaining to Booth’s location and the circumstances of his disappearance; and Arastoo makes a decision that will change his and Cam’s personal and professional relationships.”

Tune in at 8PM EST on FOX to watch Season 11 Episode 2 of BONES. We’ll also be updating fans right here as the show airs so be sure to check back in with us. Brennan and Booth have had a long television run. Do you like that their characters mix up business with home life? Hit up the comments and tell us your thoughts about their tangled relationship!

Agent Miller was revealed to be holding back information so both Bones and Aubrey confronted her about her partner. Apparently his fellow agent forgot to mention that her partner Agent Richard Bannerman had been missing for the last four days. And Bones knew that couldn’t just be a coincidence.

But there was pretty good reason as to why Miller didn’t tell them everything. It seems she put much stock in coincidence either and so she was suspicious of Booth after he disappeared off of radar two days after Richard.

Richard was revealed to have downloaded a list. And not just any list but the one that names all undercover agents out in the field. So right away Richard was marked as a traitor and the reason no one can find him is because they believe he ran once he suspected they were about to arrest him and that he took his fiancée with him.

Chloe Robertson the fiancée wasn’t seen in the days leading up to Richard’s sudden departure and thus they believe her to be an accomplice. Yet Bones demanded to take a look at Richard apartment and surprisingly she find Chloe’s finger in the freezer.

Bones had taken the finger back to the Jeffersonian to determine that but Miller had tried to fight her over that decision. According to Miller, people don’t use the Jeffersonian anymore. The place hasn’t been closing cases as much as they used to back when Bones worked there.

Though it was Miller’s people that overlooked a finger in the freezer and Caroline reminded the other woman of that whenever he tried to make a comment again about the Jeffersonian.

Bones however was left upset. She felt like the Jeffersonian wasn’t upholding its reputation and she lashed out at several of her former colleagues. Most notable Arastoo. First he misidentified Jared Booth’s remains as Bones’s Booth and then she found out that the entire team has been delivering shoddy work in her absence.

So Arastoo didn’t want to pretend his job was still going to be secure after all of this. He later told Cam that he was going to be out looking for a new position as soon as possible and in meantime Cam had to regain control of her lab. Because it was just Arastoo’s work that Bones had disparage and Miller took it upon herself to send in another person to run tech forensics with Angela.

Dr. Benjamin Metzger was highly qualified and he put Hodge on edge because of both his looks and the close capacity in which he was going to be working with Angela.

But, as for the finger, it led to a significant clue about who would take their missing woman. Arastoo and Hodge found out that someone had used wire cutters to remove Chloe’s finger. And that along with the toxic chemicals imbedded into the wound pointed the agents to an abandoned warehouse.

Only, once Miller and Aubrey arrived, they found a pair of vultures pecking at some remains. And those same remains were revealed to be both Chloe and Richard.

The pair had been shot though it took a lot more than that to get Richard down and then someone had thrown battery acid on their remains. Yet the acid attracted the vultures who aren’t typical seen in the area. So there wasn’t a lot left of either of the couple.

Yet going forward, Angela found something in Bannerman’s cloud account. She found old pictures of Richard and Miller together as a couple. So Aubrey and Miller had to bring her in for questioning because those photos gave her ample motive to want to kill both Richard and the woman he left Miller for.

And of course Miller denied it. She said she was angry and that she hadn’t been talking to her partner as much as she used. Thus in a way Miller no longer knew who Richard was.

He had a CI that he never told her about and she also hadn’t know how close he and his fiancée had grown to Dr. Metzger. Metzger had come into work with a sprained wrist that he claimed was carpal tunnel yet it stood out after Bones realized that someone had repeatedly punched Richard in the head using brass knuckles.

Damage like that would have caused an injury. So Bones knew who her suspect was but didn’t want to waste time with a traditional investigation. And that’s how she came to twist Metzger’s wrist until she got him to talk.

He gave her the location that she needed and the FBI handled the rest.

They found Booth and he was alright. But it was sad story about how he got to be where he was. It looks like Chloe was kidnapped in order to pressure Richard into downloading that list. And then they were killed to cover up their part in the transactions.

Yet Metzger was going to sell that list for two million dollars to a group of guys. Those guys are the ones that Jared got mixed up. In case you forgot Jared was the troublemaker of the Booth family. Meaning he always found himself right in and it was up to his big brother to come rescue him. And in this case that’s exactly what Booth tried to do.

Jared got in over his head again and called Booth. And Booth then infiltrated the group he was running with in the hopes of freeing his brother and stopping the list from getting into the wrong hands. The latter part being the only place where he succeeded.

So Booth stopped hundreds of agents from dying but it’s going to take some time before he could forgive himself for what happened to Jared. And for now, both him and his wife have begun to think they were a little too hasty in wanting to retire.

There’s been a part of them that has missed the job and so Bones is going to back to Jeffersonian. So Arastoo is going to take a job elsewhere. And as for Booth, he has time to continue to think about things while he’s in the hospital for that gunshot wound.