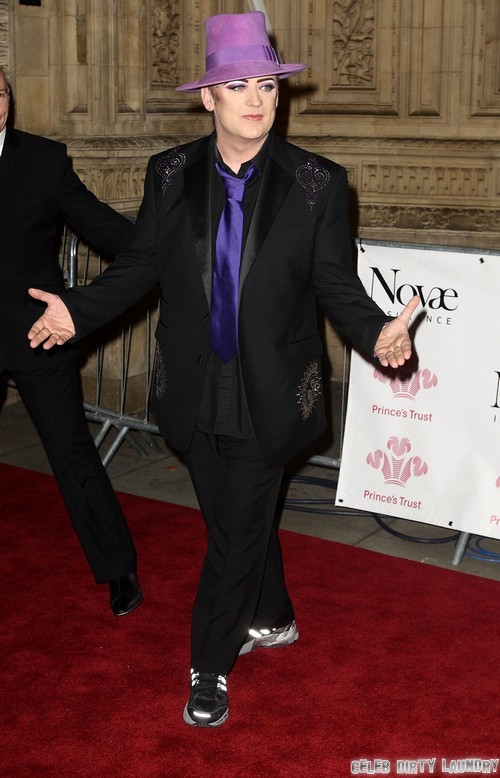 Boy George is claiming that he slept with Prince in a shocking admission in front of a live audience. On a recent filming for the UK version of “The Voice,” Boy George was chatting it up with Paloma Faith when he made the jaw-dropping revelation.

Apparently the two singers were doing a little bragging about which other famous artists they have worked with in the past. George dropped names like Smokey Robinson and Luther Vandross, which are pretty impressive. That’s when Paloma Faith said she had worked with Prince.

The live audience of “The Voice UK” went nuts at the idea of a Boy George and Prince hook up. The stage crew had so much trouble calming the audience down after the shocking admission that they had to stop filming until everyone calmed down.

Will.I.am, who is also on the judges panel, couldn’t believe his ears. The “Scream & Shout” rapper umped up and started high-fiving Boy George. The interaction between Will.I.am and Boy George made the crowd even more excited as they witnessed such a shocking bit of celeb gossip. It was like being front and center while one of the UK’s biggest gay icons outed one of the greatest performers in history.

It didn’t take long after Boy George’s crazy confession that the “Karma Chameleon” singer started to backtrack on his crazy claim. Instead, George tried to say that he was making up the affair with Prince and that really he just had the “Purple Rain” singer’s poster on his wall. Is anyone actually buying that? It sounds more like the British gay icon thought twice about outing one of his friends and decided to pretend he made it up.

Prince has been married to two different women, Mayte Garcia and Manuela Testolini. The iconic singer is currently rumored to be dating British singer named Delilah. Despite several long term relationships with women, Prince has always been rather elusive about his sexuality and rumors that he may swing both ways have followed Prince for decades.

Now fans of Boy George and Prince are wondering if the hook up ever happened. The way Boy George flippantly admitted to the dirty deed makes it seem like he might be telling the truth. Now we wait to see if Prince has anything to say about the shocking claim.