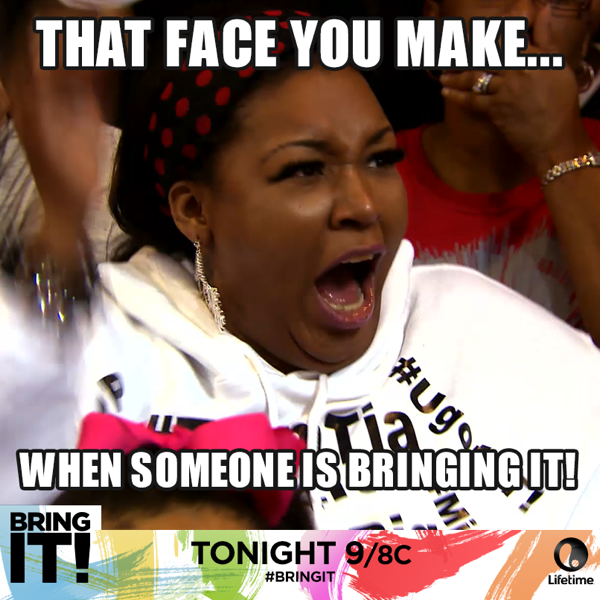 On Lifetime tonight Bring It! airs with an all new Friday March 27, season 2 episode 10 called “Don’t Do it Neva,” and we have your weekly recap below. On tonight’s episode, the beef between the Dancing Dolls and the Divas of Olive Branch reaches a whole new level when Miss D and Coach Neva decide to join their squads on the dance floor.

On the last episode, the Dancing Dolls traveled back to Atlanta, Georgia, for a much anticipated rematch against hometown favorites, the Dazzling Divas. Meanwhile, Selena butted heads with Miss D after Sunjai failed to make cuts in creative dance and a freak injury threatened to keep captain Kayla from performing, leaving the Dolls at a major disadvantage. Did you watch last episode? If you missed it we have you covered, we have a full and detailed recap right here for you.

On tonight’s episode as per the Lifetime synopsis, “the beef between the Dancing Dolls and the Divas of Olive Branch reaches a whole new level when Miss D and Coach Neva decide to join their squads on the dance floor. Meanwhile, Miss D makes the risky decision to have Tamia lead stand battle in hopes the change will throw the Divas off their game and Crystianna attempts to make history as the youngest Dancing Doll to compete in the solo category, at only 12 years old.”

#BringIt starts at the Dollhouse with Dianna telling the team they are competing in Greenwood, Mississippi in two days. She says they are doling in solos and stands. She reads off their rivals. Among them is the Divas with Neva. Dianna says last time they beat Neva who left in tears. Dianna tells the girls that Neva is a huge moving target and she can’t wait to go after her. She says Kayla won’t be out front and says instead Tamia will lead this week.

Dianna says she’s thinking about the future and those she will lose at graduation. Over at the Divas, rehearsal, Neva coaches her girls hard. Neva says she’s the diva and says to give them the hard face and tells Tamia to work it. She says their stands number will crush the Dancing Dolls. She talks about Dianna pulling her pants down last time and says they behaved badly. Neva says they finished then decided to leave because they felt like they already won.

Neva says Dianna knows her girls can beat them. She tells her girls to bring it. She says the dolls can bring their A game but they’re bringing A plus. Mimi is laughing at Tina’s panda suit in the cold. Tina says her panda outfit is great because she’s warm and says those heifers are crazy for being cold. Dianna coaches the girls on their stand number. The moms wonder why Tamia is out front. Mimi says Dianna is preparing everybody to try out for the captain position.

Tawantza says she wants Tamia to be captain and then Carmyn can be captain later. Rittany is thrilled that Crystianna has her first solo and says she’s prayed for this day. She says she’s only 12 so this is great. Tina says Crystianna’s last solo was at try outs but she messed up and had to start over and says it’s her chance to redeem herself. Dianna says she has Tiama leading stands so she can see how she does in a leadership position.

Camryn say she had her chance and it’s Tamia chance to try it. Dianna says they are only as strong as their leader. Tamia says if they lose people will think it’s her fault. Dianna is not happy with how Tamia is doing. Dianna says her opening move didn’t make sense. She says if the head of the dragon isn’t breathing fire no one else will. She tells her to move her swagmeter off zero. They start again. Dianna tells Tamia she’s just going through the motions and chews her out. She calls her lazy.

Dianna thinks she’s dancing soft and they can’t win like that. She tells her to do something about it now. The night before the competition, Dianna works with Crystianna on her solo. She says the divas had all kinds of crazy props last week and was talking smack. Dianna says she can’t wait to see Neva’s face when she loses again. In the solos, they can use some other members for an intro. The solo is based on Cleopatra. She sends the others and holds Crystianna for some more detail work.

Dianna says Crystianna is killing it at practice but hopes that side of her shows up on competition day. On competition day, they head to Mississippi on the bus. They unload and Dianna says she’s going to go play with Neva and tells the girls to do what they need to do. She says to go get dressed so they can walk the floor. They all chant DD4L. Then the Divas show up. Neva tells the girls they need to go out there and cut the hell up.

Neva comes to talk to Dianna. She says they need to talk about the last competition. Neva tells Dianna that she made her team uncomfortable and talks about her pulling her pants down and talking about her eyebrows. Dianna says Neva tried to throw shade and says she got mad just cause she called her out. Neva says they need to behave and just let the girls compete. Dianna isn’t having it and says they don’t back down from nothing then says Neva ran off and imitates her.

Dianna says she left because she knew she lost. Dianna tells her to calm the f-k down for real. Neva tells the Divas not to show any mercy. They are also in solo and stands. Neva tells them to snatch their shirts off when they go out and not to be prissy. She tells the team to kill their asses and says they need a victory. Neva says the Divas are going to wipe the floor up. Over in the Dolls room, Dianna says a prayer with the girls.

Solos are first. Dianna says she likes the energy she’s seeing from the other competitors. The divas come out for their solo. Neva says Cialah is so exciting as a dance and looks just like Beyonce. Neva says the soloist had a great energy level but she’s doing the same tricks over and over and says she was waiting on the meat of the routine. Neva pulls offer her jacket and steps out on the floor. Tina can’t believe it. She gets out there and dances. Dianna says the whole earth is shaking as she dances.

Neva says as long as there is a solo person dancing, they didn’t break the rules. She says she wanted people to know she’s a dancer herself. She says she was happy to bring all her moves. The solo ends and the crowd goes wild. Neva thinks she did awesome but Dianna says they didn’t do it like she was expecting and says it was a mess but admits the judges seemed to be on the edge of their seats.

Next is the Dolls’ solo. The crowd chants DD4L. They wheel out the pyramid they’ve made with Crystianna in it. Dianna says her extra people are only for her intro. The number starts. Rittany says she’s a nervous wreck for her daughter. Dianna hopes Crystianna doesn’t have a meltdown. Then the rest of team back away and she goes into the main part of her solo. Dianna says she’s amazed at how much she’s grown as a dancer.

Rittany says her daughter is doing damned good. Mimi is crying it’s so good. The audience cheers loudly as she finishes. The team comes to join her for the exit part of the number. Dianna says this is the Crystianna she’s been waiting to see and says the judges seemed to be intrigued but says it’s up to the judges not her. Dianna gets the girls ready for the stand battle. Tamia is nervous and Dianna worries she’s put her up there too soon.

She starts to tear up a little and Dianna says if she didn’t think she could do it, she wouldn’t have put her up there. Dianna says ordinarily she yells at her girls and tells them not to cry then calls Kayla over who reassures her and fixes her makeup. For the stand battle, the Divas and Dolls face off. Dianna says Tamia better not mess up with the team. Dianna says the Divas first stand looks good but they’re not scared. The Dolls are up and Neva wants to know what the hell is going on with the hair flipping.

Neva says this is not dancing. Next up is the Divas football stand. She says Dianna will not be able ot believe they did this. Dianna says Neva always has tricks and props but this is a bad one. The Dolls do their next stand with Kayla doing a little solo in the middle and she’s on fire. Dianna is dancing on the sidelines and says Kayla is leaving her mark. The Divas do their last stand and Neva says they’re going to kill it and the Dolls won’t know what to do.

Dianna says it’s the same old stand with the baby dolls. The moms are over it. Now the Dolls last stand is up. Dianna says she’s going to be the pop up visit and she pulls off her sweats. Neva wants to know why Dianna is going to the floor. Tina says Dianna can piss people off and dance. She heads out with the girls to dance while Neva complains and says she can’t believe a coach got in the battle and didn’t get disqualified.

Dianna drops it like it’s hot – she did a death drop and Kayla says it looks like she was trying to kill herself. Neva wants them disqualified but Dianna says she’s a prop and there’s no real against it. The teams chant as the judges score the performances. Solo awards are up first. Crystianna wins first place and Rittany is thrilled. Then for the stand battle, Neva is sure the Divas have it. Dianna is sure they didn’t. The Dolls take first in that too. Neva says the crowd enjoyed their number more.

Dianna says she’s excited but Neva doesn’t look too happy. Neva says they’ll take them at the Battle Royale competition. The girls chant DD4L. Dianna tells Tamia she did a good job and they cheer then they also cheer Crystianna. That’s it!