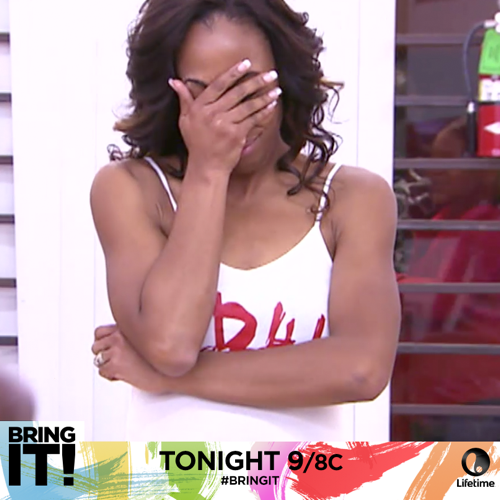 On Lifetime tonight Bring It! airs with an all new Friday April 10, season 2 episode 12 called “Copycat,” and we have your weekly recap below. On tonight’s episode, coming off a surprising loss to Coach Quincy and the Baby Prancing Tigerettes in the Battle of the Babies, Miss D is out for retribution this week when the Big Dolls go head-to-head with the Tigerettes.

On the last episode, as the Baby Dancing Dolls attempted to defeat their biggest rival, the Baby Prancing Tigerettes, for the first time ever, Tigerette coach Quincy caused a stir when he revealed some controversial choreography. Meanwhile, Tina and Mimi butted heads with the Baby Dancing Doll Moms and Tawantza secretly tried to play the conflict to her advantage by positioning herself as a mentor to the next generation of Dancing Doll Parents.

On tonight’s episode as per the Lifetime synopsis, “Coming off a surprising loss to Coach Quincy and the Baby Prancing Tigerettes in the Battle of the Babies, Miss D is out for retribution this week when the Big Dolls go head-to-head with the Tigerettes. Meanwhile, only one of Selena’s twin daughters manages to make cuts for the team’s 80’s-inspired creative dance routine and Dianna accuses Quincy of stealing her choreography.”

Dianna is down but not out on tonight’s all new episode and she wants nothing more than for Coach Quincy of the Prancing Tigerettes to know that.

As many of us can recall, last week it was the babies’ turn to impress. And while Dianna was proud of her own Baby Dancing Dolls’ effort, the children in question were left hurt when they came in second place to the Baby Prancing Tigerettes. Plus it was a definite hit to their pride when Coach Qunicy didn’t even have the nerve to take his team’s win graciously. He and his dancers basically laughed in the other’s team face and this is children we’re talking about.

So now he has to deal with Dianna because she wants revenge for her girls. And you know what the older Dancing Dolls wants to redeem themselves as well.

No team wants back to back loses. And so Dianna is pulling out all the stops for the upcoming competition. This week her girls are going to be dancing a Janet Jackson inspired routine.

They’re going start with a “Rhythm Nation” inspired dance and slowly work their way into their usual “I got this, I’m Dancing Doll” style. And seeing as that routine was going to be such a difficult dance, Dianna was extra critical this week. In all honesty it could have been the fact she popped out her knee earlier or it could have been her simply dislike of Coach Quincy but either way she wasn’t afraid about pushing one her dancers into possibly crying.

When she says she wants the best they got that means she doesn’t want to watch anyone try to half-ass it on her floor. So, unfortunately for Selena, she was simply destined to be disappointed again this week.

For some unknown reason, she seems not to understand that her twins are often too laid back during practice. And the odd thing is that she wants the practice just as much as Dianna. Yet her mom goggles make her believe her daughters are more talented than they are.

Then again she also said that she wanted to base her parenting style after Joe Jackson!

So when she’s not boring her blind date with tales about her daughters’ competition – she’s confronting Dianna. Only this time she chose to do it moments before competition. And Dianna simply was not having that.

She was tired of Selena’s delusions and she told her that Sky didn’t make the cut because she didn’t actually want it. If she did then maybe she would have liven up instead of acting like someone dragged her to the dance class. And in this situation, who knows maybe she was dragged.

Besides the argument with Selena though the rest of the night ended up being a good one for the Dancing Dolls.

They did their Janet to Modern Dance routine for the Creative Dance category and both Dianna and the audience were left impressed. And that little confidence boost she got from it later made Dianna tell Quincy to his face that she knows he’s been stealing dance moves from them. So Dianna was on cloud 9 and nothing the Prancing Tigeretts could do was going to knock her off.

And that’s includes what they did in Stand Battle.

See not everyone turns Stand Battle into a personal diss but the judges do seem to love it when it happens. And having the girls kind of do the same dance in a game of one-upmanship was fun to watch. The Prancing Tigerettes copied many of the Dancing Dolls’s trademark moves and though the original team did their dance better – there was just one judge that didn’t appear to be impressed by the Dancing Dolls.

So Dianna was actually pretty scared about what the results were going to be. However she eventually found out that she had nothing to fear. Her girls swept both categories they were in and most importantly they beat the team that tried to steal from them.