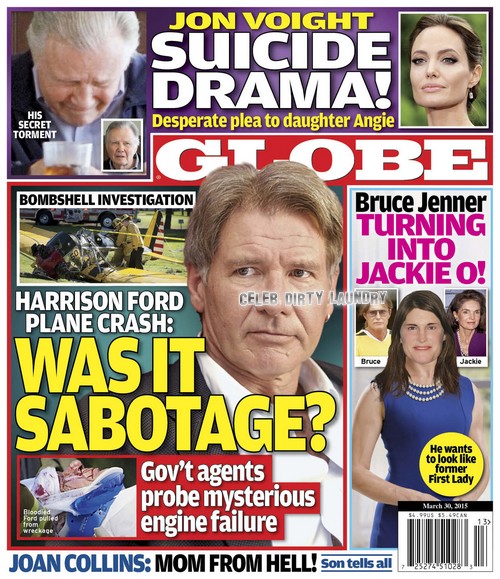 Will Bruce Jenner be the next First Lady? Bruce Jenner’s transformation into a woman is nearly complete, and rumor has it he will be undergoing sex change surgery any day now. Since it was confirmed Bruce Jenner was becoming a woman – there has been a lot of speculation over what kind of woman he will become, what he will wear, and who he will date. The March 30th edition of GLOBE Magazine reveals that Bruce Jenner’s female muse is none other than Jackie O. and claims “he wants to look like the former first lady.” Call us crazy, but we don’t think the first lady would have been caught dead on a reality TV show with the Kardashians.

And, as always our friends at GLOBE ask the hard questions like was Harrison Ford’s plane crash really an accident, or was he the victim of sabotage? Harrison Ford narrowly escaped death this month when he crashed his plane into a golf course – luckily there were doctors on hand and the actor was rushed to the hospital. It was quickly determined that Harrison Ford’s plane went down by no fault of his own, and he began experiencing engine trouble in the single-engine World War II era plane that he was flying himself. Reports revealed that the engine in the plane began to fail shortly after Harrison took off from the airport and he radioed in for a safe place to land.

According to the March 30th cover of GLOBE Magazine, Harrison Ford’s plane may not have just experienced engine failure, someone could have sabotaged the actor! The cover of this week’s edition of GLOBE features photos of the wreckage and the headline, “Harrison Ford Plane Crash: Was It Sabotage? Government Agents Probe Mysterious Engine Failure.” This week’s all new edition of GLOBE Magazine also teases a hard-hitting story on Angelina Jolie’s father Jon Voight battling his inner demons, and apparently Joan Collins’ son is telling all about what a “monster” his mother truly is.

So, what do you think of Bruce Jenner becoming the next Jackie O? Did someone really sabotage Harrison Ford’s plane? We’ll be picking up this week’s edition of GLOBE Magazine as soon as it hits newsstands so we can dish all the dirt. Let us know what you think about the conspiracy theories behind Harrison’s plane crash in the comments below!