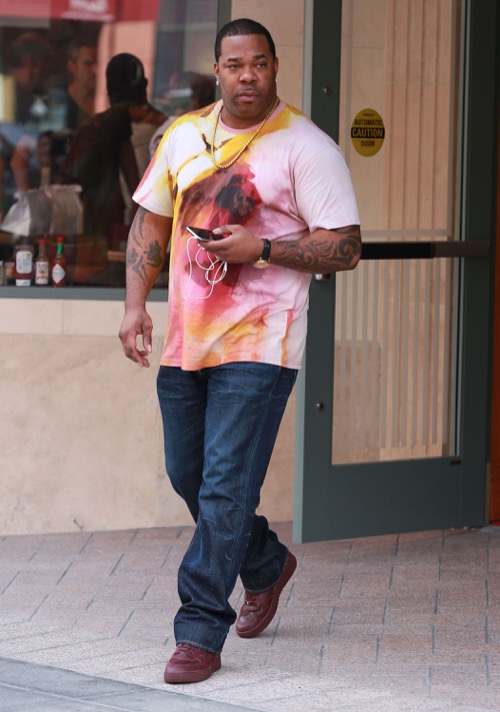 Busta Rhymes’ NYC gym attack video was recently made public and the “Calm Down” rapper looks like he needs to take his own advice in what looks like a scary bout of roid rage. The whole ordeal happened back in August when Busta, whose real name is Trevor Smith Jr., completely freaked out at the person working the counter of Steel Gym in New York City.

Busta Rhymes was arrested and has since reached a plea agreement that essentially let him off the hook but it wasn’t until Tuesday, November 17 that video footage of the incident was made available and the attack is much more serious than previous reports led everyone to believe.

When the incident originally happened back in August, Busta Rhymes was arrested and charged with assault. The whole story was downplayed and we heard about how Busta threw a Muscle Milk drink at the gym employee.

There has been a bit of confusion about the flavor of the protein drink. Some say chocolate while others have reported strawberry. The whole story sounded pretty amusing until you actually see the footage.

Busta Rhymes won’t be doing any jail time for the scary drink throwing incident. As a matter of fact, the “Break Ya Neck” rapper struck a plea deal and got off easy with a second degree harassment charge. The assault won’t even show up on Busta Rhymes’ record and he will have to attend anger management classes.

The scary roid rage looking attack on the Steel Gym employee was a result of a two day long argument between Busta Rhymes and the gym employee. Apparently Busta wanted to bring someone with him to the gym to film his workouts.

When Rhymes was told no on filming, he got really upset and argued with the employee. It wasn’t until the next day when Busta Rhymes came back to his NYC gym and confronted the employee again that things went south fast.

Busta Rhymes can be seen on the footage as he throws water at the Steel Gym employee. After that, Busta goes into a full rage and shoves the computer and phone equipment while it looks like he’s trying to come over the counter at the employee. The whole Busta Rhymes NYC gym attack is shocking to say the least and many wonder if the rapper lost control of himself because he was possibly using steroids?