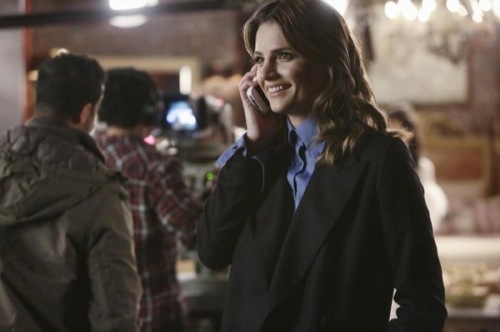 Tonight on ABC Castle starring Nathan Fillion continues with an all new Monday January 19, season 7 episode 12 called “Private Eye Caramba!” and we have your weekly recap below. On tonight’s episode, an actress on a telenovela is killed, so Beckett’s [Stana Katic] team investigate and find the case to be as beguiling as the victim’s show. Meanwhile, the star of the show hires Castle [Nathan Fillion] to tackle the case from a different angle.

On the last episode, when an ER physician was gunned down in the street, Castle and Beckett soon discovered that the victim was a mob doctor to a Mafia family run by an old friend of Castle’s. Also, against the backdrop of Christmas, Esposito and Lanie reached a defining moment in their relationship. Did you watch the last episode? If you missed it, we have a full and detailed recap right here for you.

On tonight’s episode as per ABC’s synopsis, “when a young Latin telenovela actress is murdered, Beckett and the team delve into a case that is as flamboyant and full of intrigue as any telenovela. Meanwhile, Castle is hired as private investigator by the show’s sultry star to pursue the case from another angle.”

Tonight’s episode of Castle kicks off with Kate and Castle’s mother Martha talking about his private eye business. Kate is worried because Castle isn’t getting any good cases and he is wasting his time. Kate gets a phone call for a case, and Castle agrees to walk her to the crime scene. He reassures her on the way that he has a big case coming up and he is doing a background report on a girl’s 16 year old boyfriend.

Kate arrives at the crime scene and learns that the murder victim is a Telenovela actress named Anna Menendez, her body was stashed under a pile of garbage after she was hit over the head and killed with a pipe. The coroner reveals that there were signs of struggle, and the cause of death was a blow to the head. The murder weapon is lying next to Anna’s body, it’s a lead pipe. Anna is an elaborate ball gown and Kate tells Ryan to figure out where she was before she was killed.

Kate and Esposito head to the studio where Anna worked, her producer reveals that no one had any beef with Anna except for her co-star Marcus. They fired him last week because she and Anna got in a huge fight on set and he threatened to kill her. Kate chats with another one of Anna’s co-stars, her friend Sophia. Sophia reveals that she loaned Anna a purse the night before and she needs it back because it is on loan from a boutique and she has to return it before they charge her a fortune.

Kate sends Sophia to Castle’s office, and she hires him to find her purse since it wasn’t found with Anna at the crime scene. She informs Castle that the purse is worth $500,000 and she has to return it to the boutique tomorrow. At the police station they bring Marcus in for questioning and he reveals that the fight he had with Anna was staged and Anna paid him $3,000 to stage the fight with her so that her producer Francisco would give her a few days off. Kate checks Marcus’s alibi and learns that he couldn’t have killed Anna because he was spotted on the other side of town at her time of death. Castle and Kate’s cases both lead them to an opera house where Anna attended the movie premiere of Rigoletto right before she was murdered. They learn that Anna was only there for a few minutes, and she met with a woman who gave her a flashdrive. She left the opera house in a white limo in a hurry.

Castle heads back to the studio and tells Sophia that Anna left the movie premiere in a white limo and she had the purse with her. Sophia is not happy that they have less than a day before the purse is due back at the boutique and Castle’s only clue is a white limo.

At the police station Kate and her team ID the woman that gave her a flashdrive, her name is Leila and her father is a Saudi official and a billionaire. They also linked her to a shady real estate agent named Herman.

The coroner has news for Esposito and Ryan, he found a fingerprint on Anna’s body.
Kate brings Leila in for questioning, she insists that she is a huge fan of Anna. Kate wants to know what she was doing last night at the opera house and what was on the flash drive, Leila freaks out and says that she doesn’t have to answer her questions and she has diplomatic immunity and leaves. The print comes back and Kate learns that it belongs to a hired hit man named Harlan Mathis.

That night Sophia heads to Castle’s office and is not happy when she walks in on him making out with Kate and he still hasn’t found her purse. Castle insists that he is going to find the purse and shows her where he has been tracking Anna on social media. They go over the the Instagram photos and find a picture of Anna jumping out of the white limo without Sophia’s purse. Castle also manages to find the VIN number on the limo door and has a major break in the case.

Kate heads back to the office the next day, and Esposito and Ryan have a lead on the hitman Harlan Mathis. They head to his motel room and he has already checked out, but they find security credentials in his room for the Saudi group that Leila’s father is a part of. Meanwhile, Castle gets a lead on the white limo and learns it was registered to the Danbridge Group. He heads to the garage and finds the limo and climbs inside to look for the purse. Harlan Mathis climbs in with a gun and orders Castle to hand over his phone and announces they are “going for a ride.” Castle explains that he is just looking for Anna’s purse. The driver isn’t buying it, he ties Castle up and prepares to stab him and Esposito and Ryan barge in with their guns drawn and save him.

Back at the police station, Kate lectures Castle on being more safe and letting her know where he is at all times. They bring Mathis in, and learn that the limo was registered to Danbridge Group – which was just a cover name for Leila’s father Abdul. Castle says that Anna didn’t have the purse when she got in the limo – he has a hunch that Anna may have dumped it before Mathis abducted her and forced her in to the limo.
Kate questions Harlan, and he says that he was hired by Abdul to bring in Anna because he wanted to talk to her. Harlan insists that Anna jumped out of the limo five minutes later and ran away. He claims he didn’t kill her, he went to her apartment and found her laying in the street and the reason that his fingerprints were on her neck is because he checked her pule.

At the opera house, Castle is snooping around outside looing for places that Anna could hae stashed the purse. He scores and finds it in the bushes and takes it back to his office. He finds the flash drive in the purse, and prepares to put it in his computer and Sophia shows up at her office. She pulls a gun on him and orders him to hand over the purse and the flashdrive. Castle realizes that she was after the USB drive the entire time, and the purse is just a knockoff. He wrestles the gun away from her, and calls the police so that Sophia can be brought in.

The tech guy decrypts the flashdrive and learns that it is a security key to a Swiss bank account containing $100 Million. Kate questions Sophia, she insists that Anna was just her business partner and her friend and she didn’t kill her. Sophia reveals that Anna had found an investor to start her own Latin American Woman TV network. Sophia says that Leila gave her the money to invest, but they had to keep it a secret because Abdul didn’t want Leila to invest. Kate verifies Sophia’s alibi and realizes she was at home when Anna was murdered.

Kate and Esposito realize that Anna’s producer Francisco had motive to kill her because if she started a new network and took Sophia with her – they would put his network out of business. They question Francisco and he confesses that he hit Anna with the pipe and killed her, but he never meant to hurt her – he was just angry. The case is solved and Anna’s killer is finally behind bars.