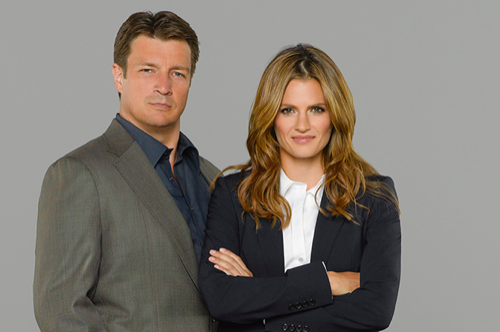 Tonight on ABC Castle starring Nathan Fillion continues with an all new Monday September 21, season 8 premiere called “XY” and we have your weekly recap below. On tonight’s episode in part 1 of the two-part eighth-season opener, Castle (Nathan Fillion) searches for a missing Beckett (Stana Katic) following a call from a mysterious stranger.

On the last episode, a death in the woods draws Castle back to a terrifying and defining event in his childhood. Investigation lead to obsession, as he attempts to unearth answered that have eluded him for decades, all while Beckett faced a crossroads of her own. Did you watch the last episode last season? If you missed it, we have a full and detailed recap right here for you.

On tonight’s episode as per ABC’s synopsis, “when Marco is captured by Toffee and held for wand-ransom, Star enters into an unlikely alliance with Ludo and Buff Frog.”

Tonight’s season premiere of Castle kicks off with a woman at a bar, sipping a drink. A man joins her and says that he saw her at the coffee shop and the gym – he wants to know why she is following him. She straddles him in the dark bar, and says it was so that she could “do this” – she stabs him in the chest and kisses him at the same time, then she slips out of the dark bar and no one is the wiser.

Kate is getting ready for work, Castle surprises her with a “First day as Captain” cake with sparklers. Kate is nervous, she says that she can’t eat. Castle tells her to “dig in” anyways. She reached in to the cake and finds a jewelry box – with a bracelet inside of it. She raves about how beautiful it is as her cell phone starts ringing. She tells Castle that it is just a telemarketer after she hangs upand tells them to “take her off the list.”

At the police station, Esposito and Ryan are fighting over which one of them gets to have Kate’s desk. Ryan is upset, she reveals that Jenny is pregnant again and he feels like he is stuck in a rut and his career has plateaued. Everyone is getting a promotion but him. His phone goes off – there is a homicide, he is thrilled because he thinks he might get overtime pay.

At Castle’s private investigator office a man barges in and says that his name is Franco Marcini – his wife is having an affair with his brother. He thanks Castle for him and his associate helping him solve the case. Castle is baffled, Frank leaves. Alexis marches in and he realizes that she has been working his cases for him. Castle is distracted immediately when he sees all of the new renovations that the construction crew did to make his office look like something out of a James Bond movie.

Esposito calls Castle from a crime scene where they are investigating a murder. Esposito needs Kate to come down, but she is busy in a meeting. Castle volunteers to come to the scene of the crime and lend a hand. Upon arrival he learns that there are three victims: Dustin Chambers, Greg Minoso, and Jake Fitz. They were all packing guns, they were killed by gun shots, and they appear to have come from upstairs on the balcony of an abandoned theater. Castle bends down to investigate one of the dead bodies – he pulls a bracelet out of one of the victim’s bullet wounds. It is the same bracelet that he gave Kate that morning, she was at the theater during the shooting. They run the blood on the bracelet – and confirms that Kate’s blood is on the bracelet.

Castle is baffled – he doesn’t understand, Kate said she had a meeting at 1PP. They check there and learn that Kate lied to Castle, she didn’t have a meeting. They find a credit card on one of the victims and trace it to an address. Castle and the cops rush the apartment, it’s empty but they find a woman in there named Haley and arrest her after she beats up Castle.

Esposito and Ryan bring Haley in for questioning. She hails from London, and has a colorful arrest record. She insists she doesn’t know the guy that rented the apartment – she says she waslooking for a Starbucks and got lost. Haley finally admits that she is working for an insurance company and investigating the case of five stolen identities. She flew in when she learned they were in NY and tracked them to the apartment. The identities are: Dustin Chambers, Greg Minoso, Jake Fitz, Ty Dade, and Susan Emory. She has an alibi, he flight didn’t land in New York until after the murders last night. Her story clears, and they have to cut her loose. Castle isn’t happy, he is certain that Haley is hiding something. Castle cornres Haley and tells her that Kate is his wife and she was injured and abducted, he begs him for her help. Haley insists that she doesn’t know anything and leaves the station.

They get a phone call from a drycleaner, they say that there is a stolen van with blood parked outside and the owner was just taken hostage. Esposito, Ryan, and Castle arrive and are shocked when te owner of the drycleaner says that Kate was in charge, and she ordered a man to lock her in the back room while Kate sewed her wound up with a needle and thread. She says that the guy with Kate was West Indian, and he had a beard and was acting dizzy. Castle is confused, he has no idea what Kate is up to – or who called her on her cell phone that morning. Esposito and Ryan try to trace the phone all but it came from a burner phone.

Castle receives a phone call from Alexis – she asks him to come back to the office ASAP. He finds Haley there chatting with Alexis, she agrees to help him find Kate under one circumstance … no cops. Castle agrees to her terms and tells her about the West Indian man that the dry cleaner saw with Kate. Haley says that she has a lead on the shooters, and she is going to help Castle find them so that he can find Kate and she can get the stolen identities.

Meanwhile, Alexis has a hunch of her own – she researches a bogus 911 call that came in near the drycleaner where Kate was. She tracks down the EMT and checks its surveillance tapes, Kate broke in to steal the West Indian guy with her some insulin, he is diabetic. Alexis spots the cab number that Kate and her accomplice climbed in to and gets the ID number off from the video.

Castle and Haley head to a storage unit where she got a lead – upon arrival a woman jumps out of nowhere and attacks Haley, it’s the same woman that stabbed the man at the bar at the beginning of the show. There is a scuffle and the woman gets away. Alexis calls Castle and gives her the info on the cab, she says that Kate took the cab to a prison and visited Senator Bracken. Haley is confused why Kate would want to see Bracken – Castle explains that he had Kate’s mother killed.

Haley drops Castle off at the prison, and then she goes to the lab to get the blood on her shirt tested from the woman that she fought with at the storage locker. Inside, Castle isn’t making much progress. Bracken mocks castle and tells him that he doesn’t even know his own wife, Kate is obsessed with solving her mom’s murder – and she is never going to be happy with her husband until she does so. He tells Castle that Kate is like a “moth in a flame” and then leaves.

Ryan and Espinosa arrive at the storage unit, they’re a few steps behind Castle and Haley. They found the storage unit full of guns and realize that Castle must have already been there and is working with Haley. Castle walks out of the prison, the woman that fought Haley is waiting for him, she pulls a gun on Castle and injects him with a needle then tosses him in the back of a van. He wakes up in a warehouse, the woman is holding him at gunpoint. Apparently she is a fan of his books and references once of them. A guy arrives, he points a gun at Castle’s head and tells him he wants to know where Kate is – or else he is going to kill him. Castle won’t talk, so the guy proceeds to start unleashing a box of tarantulas on him.

Alexis freaks out because her dad’s cell phone is off. She runs and tells Ryan that he is missing, and tells them everything about Haley and the prison. They bring Haley in for questioning, she caves and tells them about the woman at the storage unit. It wasn’t blood on her jacket, it was tar – they get a lab report on it and try to figure out where the tar came from, so they can figure out where they took Castle.

Back at the warehouse, Castle has a plastic bag full of spiders over his head – he manages to get his hands untied and breaks loose from his captors. They chase him through the abandoned warehouse, shooting at him. They catch him and are about to shoot and kill him when Kate comes out of nowhere and saves the day. She shoots his kidnappers. Castle demands to know where Kate has been, she says that she loves him and then runs off before the police arrive. Ryan and Espinosa arrive a few minutes later, Castle tells them that Kate just left. They search the building and there is no sign of her – she seems to have disappeared.

Back at the police station, Castle learns that the West Indian man that has been running with Kate is someone from DC named Vikrow. Ryan and Espinosa reveal that every one from Kate’s old team in Washington DC has died in the last few days. Castle heads in to the interrogation room to question the woman that took him captive – Kate only shot her in the arm, and she survived. She refuses to cooperate, Castle threatens her and tells her that he is going to find out the truth about where his wife is, with or without her help.

Police arrive to take the woman in to custody, she steals one of their guns and opens fire on some of the officers – Espinosa manages to shoot and kill her after she wounds some of the police officers.