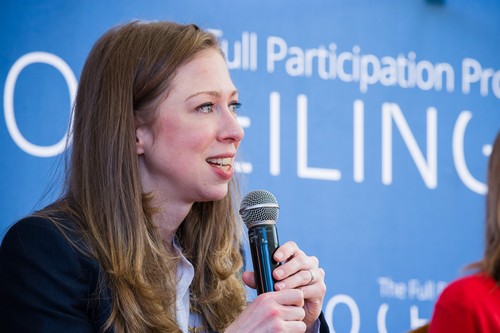 Let’s face it Chelsea Clinton has never been a hottie, but the 35 year old has finally whittled herself down to a decent bikini bod almost a year after giving birth to daughter Charlotte Mezvinsky. And now she’s locked in a serious struggle with her husband Marc Mezvinsky, according to the National Enquirer, over having a second child.

Chelsea Clinton and Marc Mezvinsky have been spotted vacationing in Sardinia, Italy – all smiles as they hang out with ritzy pals like designer Diane von Furstenberg and her husband Barry Diller. But beneath the smiles, Chelsea and her hubby of five years are in murky water with their marriage. Marc Mezvinsky is pressuring the former first-daughter to get pregnant with baby #2 so that little Charlotte can have siblings close to her in age.

Mezvinsky grew up with 10 siblings, so he’s heavily invested in having more children, but Chelsea is not ready to sacrifice the bikini bod she worked so hard to refine. And as an only child, it’s likely Chelsea Clinton doesn’t feel the same pressure to provide double digit’s worth of offspring to her investment banker hubby, but he’s not letting up. Mezvinsky has two powerful allies in his baby battle with wife Chelsea – her parents Bill Clinton and presidential hopeful mom Hillary Clinton.

According to the Enquirer, Hillary would like Chelsea to be either pregnant or with a newborn babe-in-arms while campaigning for her mother for the 2016 presidential run. Nothing screams all-American family values like adorable grandchildren, after all. Despite the pressure from her husband and parents, Chelsea is digging in her heels and putting on the baby brakes – for a couple of reasons. First is that she wants to stay svelte. At 35, it gets harder every year to lose weight.

Chelsea is concerned if she gains baby weight, she may not be able to take if off as easily as she did last time. Second, Chelsea feels like she can devote more time to daughter Charlotte if there’s no siblings to distract her. Finally, Chelsea finally feels attractive. She’s invested serious time and money in improving her looks. In advance of her summer 2010 marriage to Marc Mezvinsky, Chelsea dropped 25 pounds and reportedly had a nose job, chin implant and nose implant.

Now that Chelsea Clinton has everything she wanted – a loving husband, adorable daughter and, finally, looks that don’t have her constantly criticized in the tabloids – she’s not willing to give it up. No matter how much pressure Mark Mezvinsky, Bill Clinton and Hillary Clinton heap on Chelsea, she won’t be getting pregnant until (and if) she feels like it. As the daughter of powerhouse Hillary Clinton, you can bet Chelsea knows how to get what she wants.