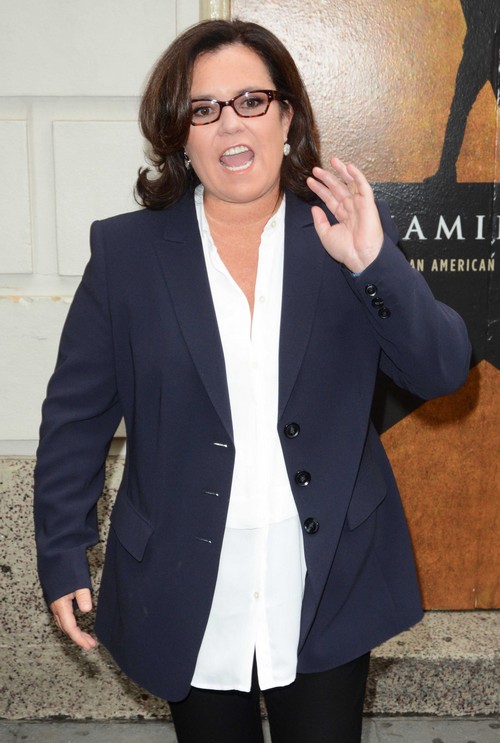 Chelsea O’Donnell has returned to live with her birth mother Deanna after going missing – apparently she can’t stand Rosie O’Donnell. According to OK Magazine, it took Rosie O’Donnell a whole week to report that her special needs daughter Chelsea O’Donnell was missing. But instead of devoting all of her energy to searching for her mentally ill adopted daughter that Rosie knew was off her medications, Rosie was tweeting to other celebs, including Caitlyn Jenner, socializing and making plans.

Rosie O’Donnell’s apparent disregard for Chelsea O’Donnell is just another indication that Rosie’s soon to be ex-wife Michelle Rounds may be spot on the money with accusations of Rosie’s poor parenting. According to sources, Rosie waited five days before reporting her daughter Chelsea O’Donnell missing. Could Rosie have been too drunk or stoned to realize her daughter was missing?

Michelle Rounds made damning allegations in her divorce documents with Rosie O’Donnell that Rosie drinks heavily every night, regularly smokes pot, and allows her other underage children to drink alcohol in their home and serve booze to other minors at parties. Instead of devoting herself to the search for her daughter and taking responsibility for losing her to start with, Rosie lashed out at others.

Chelsea O’Donnell was found with 25 year old Steven Sheerer and Rosie O’Donnell immediately went on a social media attack against Sheerer. Rosie tweeted that Sheerer was facing drug and child endangerment charges. Doesn’t it feel like those are similar charges that Rosie herself should face? By all accounts, Steven Sheerer met Chelsea on Tinder which is for people 18 and up.

In fact, Sheerer may have had no idea that Chelsea was under 18. And why would he? He met her on Tinder, not on some generic site. Second, Chelsea was described as having a large tattoo of a dream catcher on her side. In New York state, it is illegal for a child to get a tattoo, at any age, even with parental consent. Since Chelsea is under 18, how did this happen on Rosie’s watch?

And should Rosie be tweeting about Sheerer facing drug charges if she is sitting around her house smoking pot, as Michelle Rounds said, when use or possession of marijuana is still illegal in New York? Rosie tweeted Sheerer’s photo and information about his prior criminal record. Yet when police turned up at Sheerer’s home, Chelsea asked to stay there and said she didn’t want to go home.

Just days after Chelsea was delivered back to Rosie’s home and turned 18, Chelsea has left New York City to live with her birth mother Deanna Micoley who claims that Rosie stole Chelsea from her as a baby. Back in March, Deanna Micoley said that Rosie took advantage of her when she was suffering from substance abuse to get her to sign away her parental rights.

And once Rosie had Chelsea in hand, Deanna couldn’t afford to fight the millionaire actress to get her child back. After Chelsea went missing, Deanna told a reporter, “Rosie should have been paying closer attention to my daughter. There is nothing I can do but sit here and wait and pray everything is okay.” Fortunately, everything was okay and Chelsea was found.

Deanna Micoley has apparently been in touch regularly with Chelsea and spoke to her just a couple of days before she ran away from Rosie O’Donnell’s house. It was Chelsea that located her birth mother last year when the girl reached out to Deanna. Chelsea reportedly told her birth mother that she had serious issues with Rosie and that Rosie has shipped her off to a series of boarding schools starting at age 12 so she wouldn’t have to deal with Chelsea.

It looks like this scandal may blow up bigger than Rosie O’Donnell imagined. Now that Chelsea is back with her birth mother, no doubt she’ll spill some ugly secrets about her upbringing – you have to wonder if they will echo Michelle Rounds’ accusations. Plus alleged kidnapper Steven Sheerer’s attorney says there are some damning facts that will come to light once this case comes to court.

Stay tuned for more on this ugly situation.