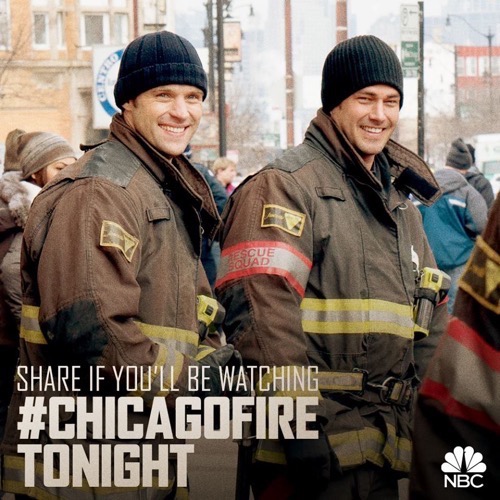 Tonight on NBC Chicago Fire continues with an all new Tuesday, March 10, season 3 episode 17 called, “Forgive You Anything” and we have your weekly recap below. On tonight’s episode, Severide’s [Taylor Kinney] old friend arrives, hoping for a second chance with the Chicago Fire Department.

On the last episode, the interim chief made a tactical error during an apartment fire, stirring up tensions and putting careers in jeopardy. Meanwhile, Mouch discovered that his donation to a fertility clinic had resulted in a child, and Dawson goes out on a double date with Brett and Cruz. Did you watch the last episode? If you missed it, we have a full and detailed recap right here for you.

Tonight’s season 3 episode 17 looks like it is going to be great and you won’t want to miss it, so be sure to tune in for our live coverage of NBC’s Chicago Fire.

Mouch has messed up so spectacularly earlier that he ended up missing out on his one and only chance to meet his daughter on tonight’s all new episode of “Chicago Fire”. And the girl’s own half-brother stopped by the firehouse and even delivered the message personally to Mouch’s face so that he get the full picture of his actions cost. Apparently, after the older man stood the girl up, both she and her family felt it was best to discontinue any further attempts on contact. You know, just in case Mouch ever thinks he can break the girl’s heart again.

Mouch later tried to talk his issues over with Herrman and Chief Boden. But Boden only made him even more scared about possibly taking on fatherhood. So funnily enough ti was up to Herrman to calm Mouch down. He told his friend that unlike Boden he was not going to be dealing with a baby and plus they don’t even know if Mouch’s daughter wants a father or simply someone that shares DNA with her.

And in the interim of all this personal drama, Severide had brought up an issue of the technical vacancy they still have on the team.

What with Mills still out of commission, they need someone to fill in for hm. And Severide has suggested an old buddy of his that had fallen on bad times. Scott Rice was after all once on the CFD. So he does know procedure and won’t need to be showed the ropes.

Mills, though, is feeling threatened. He’s still getting help for his vertigo and he doesn’t want his condition to completely write him off as a firefighter. So, like others, is apprehensive about Scott.

Scott however is really good at making first impressions and he’s managed to charm at least some of the guys. And he’s also has won over Severide. Because there was this girl once that Severide had a thing for and somehow Scott managed to track her down.

But Otis, Casey, and even Boden remain on the fence about Scott. There seems to be a rumor about Scott throwing someone threw a window and while Otis is willing to believe in a friend of a friend – Casey on the other hand needs actually proof to turn down a candidate much less bring it to their Chief’s notice.

So there are a lot of people watching Scott and waiting for him to trip up. And unfortunately one of them was Mills. After he saw how much of a good fit Scott was, Mills felt he needed to prove himself and that led to him to taking unnecessary risks. Such as climbing up high just to prove his vertigo isn’t in his way anymore.

And Mills was able to make the climb and help someone in need. But afterwards he thought that was going to be enough to get him his old job back despite not still having seen his doctor for an official diagnosis.

Mills went on to approach Severide and he told him he was still a part of the team. And he also reiterated that he earned his spot. It wasn’t given to him simply for being someone’s friend. So Severide had to tell him that Boden makes the final decisions on these things and Scott has been hired.

By the way the rumor was true. Scott did throw someone out the window but that person was junkie that had attacked him and he was not left wheelchair bound as evidently he got up the second the judge threw out his lawsuit. So that incident can’t be used against Scott. And Otis is merely going to have to find something else to justify not liking him.

Because, apparently, he did bring up the window incident with the Chief even though he had heard about the mitigating circumstances and the Chief had to tell him what else was going on at the time. For Scott didn’t just lose his temper. He snapped after losing his wife a week earlier. And he’s been raising his son mostly on his own ever since.

So that’s why Severide wanted to give him a second chance.

Meanwhile Gabby and Brett felt like they needed a night out without the guys. So they hit up the clubs and they ended up having a really good time. In this case, possibly too much.

Afterwards, Brett had started to feel like she was missing out life. And that all this time she had been settling on the comfortable because it was easy. But that’s not what she wants or why she moved to Chicago. She wants to take risks and that could mean putting the brakes on her relationship with Cruz in order to do so.

As for Mouche, Platt helped him reach out to his daughter’s half-brother. And he talked the younger man into giving him a second chance. So the next time he was supposed to meet up with his daughter, he showed!