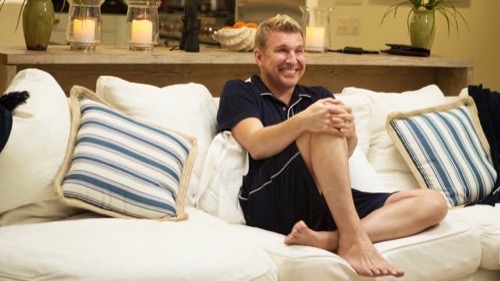 Tonight on USA Network their reality show Chrisley Knows Best returns with a three episode premiere with an all new Tuesday June 2, season 3 premiere called “Savannah’s Big Id-Ea; Life’s a Pitch”. We have your weekly recap down below! On tonight’s episode In the Season 3 premiere, a magazine asks the family for an interview about fashion.

For those of you who don’t know, the show is about self-made millionaire Todd Chrisley uses his business acumen in his home life, to the amusement and dismay of his family.

On tonight’s episode as per the USA Network synopsis, “in the Season 3 premiere, a magazine asks the family for an interview about fashion. Todd insists that everyone follows a script of his creation, but his plan doesn’t work quite as intended; Todd steps in as coach of Grayson’s baseball team, but is soon in over his head.”

Tonight’s episode is going to be filled with drama and you won’t want to miss it, so be sure to tune in for our live coverage of the show tonight at 10 PM EST! While you wait for our recap hit the comments and let us know how excited you are for “Chrisley Knows Best” season 3!

Chrisley is back for an all new season but this time around the funny and beloved patriarch might just be facing mutiny on the homefront.

Let’s rewind a bit. Todd and his wife were approached by a magazine very well known in the south. And it seems like the publishers want to conduct an interview with both parents and kids. Apparently their daughter Savannah was recently accredited for having great manners so the magazine actually wants to do an interview of Todd and Julie’s great parenting style.

Hence, before the interview they can carry out the interview, Todd created a script he wanted his whole family to memorize for the interview. And that’s where the mutiny comes in. Because getting Lindsey or Grayson to follow orders isn’t the hard part. It’s getting Chase and Savannah, who has lately begun to act like Chase, to listen is the problem.

The two teenagers appear to not understand the number one rule whenever a guest comes over. When really it’s quite simple. All they have to do is just be on their best.

And if that means downplaying how much they fight or how much the kids actively choose to ignore their parents then that’s fine. Todd merely wants them to be aware about the image they’ll be giving to the press. So honestly he’s not asking much.

Yet for some reason both of his daughters have chosen to send up his blood pressure.

Savannah had made plans without checking in with her parents first. So initially they were skeptic about her “plans”. After all Todd and Julie know their daughter and they know she wasn’t going to theatre with her friends.

And then they got even more suspicious when Savannah abruptly cancelled her plans after her sister Lindsey came over for a few minutes.

Thus Todd ended up devising a trap. He cornered Lindsey on the day of the interview and made it seem like Savannah had already confessed. And once Lindsey felt like she had to match up her story with her sister’s – she spilled everything. Savannah had “borrowed” her id and was going to pretend to be older in order to go “hang-out” with her friends. However Lindsey later changed her mind and took back her id before Savannah could use it.

So while Todd is happy that Lindsey took her id back, he was upset with both his daughter for originally wanting to go through with such a plan. And, well, it was hard for him to keep his composure for the interview. Though luckily the interviewer was able to still get a good vibe from the family.

And although no one besides Todd stuck to the script – he and his family were happy with the results.

In the second part of tonight’s premiere, the focus is off the kids for once and on the parents. Because Julie and Todd have their own talents and it’s time for them to show it off.

Take Julie. Julie is a great cook and apparently it’s been a lifelong dream of hers to one day open her own restaurant. But before she pursues that dream, she’s decided to take mere baby steps first into the field. And when an opportunity came knocking – she didn’t hesitant to take it.

Julie was asked to cater for her friend’s event. Nothing too big but it is important to Julie that her very first “job” goes down well.

However plans tend to go out the window with Chase around. Because, even though Julie had spoken to him about her catering job, Chase and his friends saw a bunch of cooked food at the house and decided in that instant that they were hungry. Then they proceeded to eat everything in sight which means that once Julie found out what they did there was literally nothing left she could save for the next day.

So Julie had to cook everything a second time and as punishment she made Chase go with her to Costco in order to pick up the extra groceries.

Only Chase wasn’t that helpful. He actually went into Costco and saw things he would want for his dorm room. So he kind of abandoned his mother and sister while he shopped for himself. And by that point Julie just didn’t want to be around him in case she accidentally murdered him.

As for Todd, he had something to prove to himself as well. It seems that no one believed he would able to coach his son Grayson’s baseball team. So after trying and failing he then brought in a retired pro baseball player to kindly take over.

See if Todd doesn’t know how to do something then you can guarantee he will know someone that does. And so that’s his talent.

And later Julie was able to pull off the parlor event for her friend Lea. Although when she agreed to host it, she didn’t know that Lea and her friends would be breaking out into song. And not just any song but opera.

So that little sideshow came as a surprise to the Chrisleys. Especially for Todd who had walked in on a performance after finishing up baseball practice with Grayson. He doesn’t know if it was his uniform or if Lea had finally lost it but she definitely was singing for/to him.

Though the food was good and everyone loved it. Thus there is a sliver lining to the whole thing.