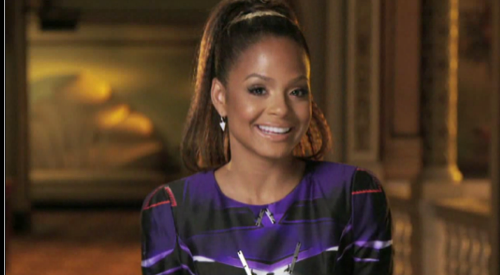 Tonight on E! Christina Milian Turned Up premieres with a new Sunday January 18, season 1 premiere episode called, “Meet the Milians,” and we have your weekly recap below. On tonight’s show, in the series premiere, Christina looks for style inspiration at New York Fashion Week.

For those of you who don’t know about the show, the cameras follow the personal and professional life of actress and singer Christina Milian in this reality series.

On tonight’s episode as per the E! synopsis, “in the series premiere, Christina looks for style inspiration at New York Fashion Week; at the same time, problems in Danielle’s marriage boil over when she and her husband fight at Carmen’s birthday party; and Christina adjusts to living with Lizzy and her Orthodox lifestyle.”

Tonight’s episode is going to be drama packed, which you won’t want to miss. So be sure to tune in for our live coverage of E!’s Christina Milian Turned Up Season 1 premiere— tonight at 10PM EST! While you wait for our recap, hit the comments and let us know how excited you are about this new show.

On tonight’s premiere of Christina Milian’s new reality show, we get to meet her extended family. And while at first they appear to be fully functioning – there seems to be a lot of things seething underneath. Now before she was a Disney girl, Christina didn’t have easy growing up. Her father left the family home when she was 15 in order to marry his mistress and afterwards when Christina went to work supporting her family – her mother came with her as her manager. Which meant her two sisters were essentially left to raise themselves.

And we can still how something like that has affected middle sister Danielle!

More than once, Danielle has had to put her dreams on hold. Either when she was raising her baby sister or later when she was her own babies. The first of which came just when she realized what she wanted to do with her life and suddenly had to stop because she became a single mother. So there’s some pent up bitterness in Danielle and unfortunately for her husband he’s her number one outlet.

Danielle is the sister with the sharp tongue (as anyone with eyes and ear can see/hear for themselves when she’s attempting her own version of a conversation). However baby sister Lizzie is the free spirit of the family. And currently she’s converting to Judaism.

Lizzie wants to become an orthodox Jew. Meaning she’s willing to accept the dietary restrictions and the change in wardrobe. And frankly her family doesn’t fully understand why Lizzie would want to do that but they still support her at the end of the day.

And sometimes Christina wants some of that support for herself. With her mother acting as her manager, Christina was never really allowed to experiment with her look or even her sound when she began her music career. So at this stage in her life, Christina is making some changes. She wants to see what’s comfortable for her and that hasn’t been sitting well with her mom.

Carmen is full-on momager. She likes to have a certain extent of control over everything and lately Christina has been finding it easier to keep her mother in dark rather than confide in her mother like she used to. Though, she is hoping that her mother will eventually learn to accept Christina’s change.

But, in the meantime, someone should be paying attention to Danielle. For it seems she’s been falling apart for some time now. Danielle says she doesn’t know who she is and while she’s trying to make that discovery – she’s been taking out her frustrations on Richard.

Everything about Richard has been bothering Danielle. And it’s gotten so bad that she’s taken off her wedding ring. Later, she admitted to her mom that she was waiting for a reason to put it back on. Though with these two constantly going at it – the ring might never be returned to Danielle’s ring finger.

Also, with the ring off her finger, Richard doesn’t want to hear about how he’s the one that’s been destroying their marriage. Especially, as the fact she took off the ring goes to show how easy it was for her. So Danielle and her husband are currently at a crossroad and if they’re not careful they could be looking forward to a divorce.

Christina is the only one willing to talk to Richard and do that calmly. Apparently, she knows how her family can be at times and seeing as they once destroyed her relationship – she doesn’t want the same to be said of Richard and Danielle.

But the couple eventually had a big blowout at Carmen’s birthday. Richard didn’t have anyone to talk to so he started drinking and that made Danielle doubt he could take care of the baby.

So they fell into a fight and instead of it dying out – it just kept growing and growing until it dragged everyone else in their mess!