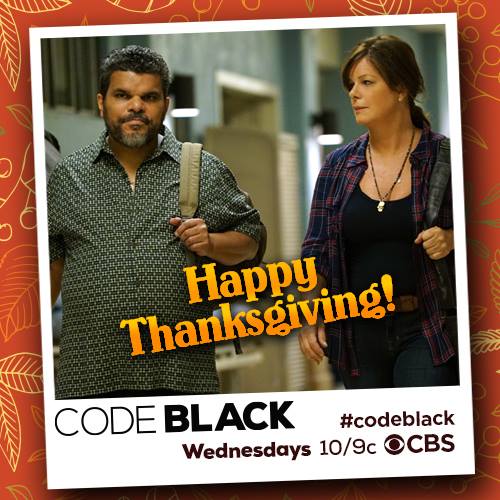 Tonight on CBS Code Black airs with an all new Wednesday December 2, season 1 episode 10 called, “Cardiac Support.” and we have your weekly recap below! On tonight’s episode, Leanne (Marcia Gay Harden) becomes rattled at the thought of losing Jesse, (Luis Guzman) as he fights for his life after suffering a massive heart attack.

Code Black centers on the fictional Angels Memorial Hospital, where four first-year residents and their colleagues must tend to patients in an understaffed, busy emergency room that lacks sufficient resources.

On the last episode, the lead actor in the touring company of the musical “The Lion King” arrived at Angels Memorial with a throat infection, but Leanne gave him a diagnosis that put both his career and life in jeopardy. Meanwhile, the doctors and the cast of “The Lion King” help a 17-year-old boy dealt with the difficult decision of taking his father off life support. Did you watch the last episode? If you missed it, we have a full and detailed recap right here for you.

On tonight’s episode as per the CBS synopsis, “Leanne becomes rattled at the thought of losing Jesse, as he fights for his life after suffering a massive heart attack. Meanwhile, Mario asks the residents to cover for him so he can search the city for a patient’s son, which goes against Neal’s direct order not to leave the hospital.”

This is definitely one series that you don’t want to miss. Don’t forget to stay tuned to Celeb Dirty Laundry where we will be live blogging the season 1 episode 10 of Code Black.

An ambulance during a cursory drive by had picked up a man that had been found unconscious. However the patient was able to wake up on their own accord and once he did he then began creating havoc wherever he went.

Apparently he had first attacked the paramedics that had been trying to help. And so while they were doing their best to fend him off, Christa who was working the circuit board that night was also wondering what was going on. No one was answering her calls and as far she could tell the ambulance had been parked right out front before they had gone offline.

So Christa brought the case to Jesse. She said the paramedics weren’t responding and that she didn’t think it was a technical failure. And therefore neither she nor Jesse could tell what was wrong. At least not without going outside to see if the ambulance was still there.

And it was but again no one was responding when the young doctors outside tried to get their attention. But then they all heard a crash from inside of the vehicle and Jesse suspected something more was going on. So he had Christa go get security and then he tried to take on a drug fueled patient with only Mario and Angus as his backup.

Which in turn is probably why Jesse got hit in the chest. Yet after that, the doctors were able to get the patient under control. All they had to do was knock him out and then treat him. So Mario and Angus later got to talk about synthetic pot.

That’s what their patient had been on and what had made him both super crazy and super strong. Almost like the Hulk the way they had to keep giving him drugs just to calm him down. And even then, they didn’t have an all-clear.

Jesse had gone to the supply closet to get more equipment and unfortunately he had a heart-attack. But what exacerbated his condition was the fact he wasn’t found until after he had been missing for almost an hour. So the hospital had nearly lost Jesse because everyone had been wondering where he was and no one had smart enough to look for him.

And speaking of looking for people, Mario managed to tick off Hudson when he purposely went against orders to leave the hospital and go look for a patient’s autistic son. It seems the father’s car had gotten clipped by oncoming train and he had been on the way to pick up his son from the bus stop. So he had given his doctors his yoda figurine and told them to give it to whoever picks up his son. The figurine was a way the only way the teenager was going to trust a stranger.

However the paramedics were all so worried about one of their own being injured, they left the figurine behind and had also completely forgotten about the patient’s son. So Mario asked Christa, Angus, and Pineda to cover him while he went to go pick up the teenager. And sadly they all got caught in the end but, as a silver lining, Hudson chose to overlook what they did because Rorish called Mario’s actions progress.

Mario came in as a selfish and cocky young man. And ultimately he proved he could change by sticking his neck out for his patient as well as turning to the others for help.

And so the only consequences that came about was the cold shoulder Hudson gave Christa afterwards. The two had become friends and had even begun to see other outside of work. Yet Hudson had been left disappointed so he decided to distance himself from Christa by keeping their relationship professional.

Although, Pineda eventually had a problem with professionalism when a mother tried to question every decision included her teenage daughter’s care.

As it turns out the mother merely wanted to hide her own part in how her daughter became sick. It looks like the teenager thought she had been losing weight because of exercise and a new diet when the truth was her mother was giving meds and calling it vitamins. So child services was going to be getting a call and the mother was actually pretty lucky that Pineda didn’t just strangle her despite appearing to want to.

But on tonight’s episode of “Code Black”, something changed following Jesse’s scare. He had told Rorish that she needed to start living again and so she had kissed Cole. Cole having already made his feelings about her pretty clear. And though Cole’s day had nearly ended with a reprimand from his own father, Rorish definitely gave him something to smile about.