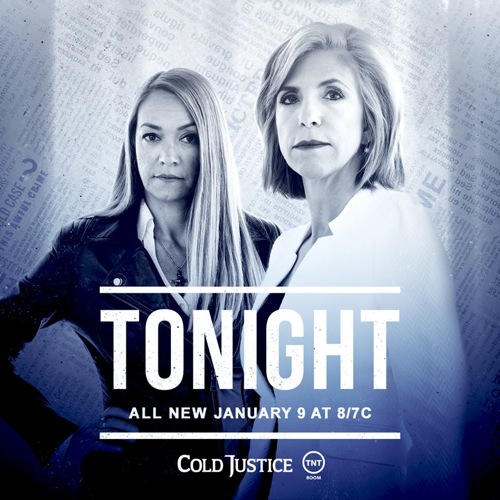 Tonight on TNT Cold Justice continues with an all new Friday January 9, season 3 premiere called, “Still of the Night (Pocatello, ID)” and we have your weekly recap below. On tonight’s episode season 3 opens with Kelly and Yolanda landing in a small Idaho town to investigate the 2004 stabbing death of a young woman.

On the last episode, real life crime series Cold Justice followed former prosecutor Kelly Siegler and former crime-scene investigator Yolanda McClary as they dug into small-town murder cases that had lingered for years without answers or closure. Siegler and McClary headed to Vigo County, Ind., where a woman was found dead in a bathtub full of water with a clock radio in the tub. It was up to the team to determine if it was an accident or if she met with a more sinister fate.

On tonight’s episode as per the TNT synopsis, “real-life crime series Cold Justice follows former prosecutor Kelly Siegler and former crime-scene investigator Yolanda McClary as they dig into small-town murder cases that have lingered for years without answers or justice. In 2004, someone crept inside a 25-year old’s bedroom window while she was sleeping and brutally stabbed her to death. In the season three premiere, Siegler and McClary head to Pocatello, Id., to search for clues and suspects including one who may be a repeat offender.”

There was a murder ten years ago in Pocatello, Idaho. The victim was Nori Jones and she was just twenty-five years old when she was found naked and stabbed to death inside of her home. But while the Idaho police did a great job – as in they collected DNA from practically the whole town – the case continued to go unsolved. So on tonight’s episode of “Cold Justice”, Kelly and Yolanda are going to take going a second look at her case to see if they can possible and finally find Nori’s killer.

The town the ladies are visiting is considered a relatively safe one. Meaning there’s not a life of crime or that much murder cases lying around. Yet, the very same thing these people are proud of is what made Nori’s case stand out all the more.

Nori wasn’t part any drug scene or even wild partying scene. She was called bubbly and fun. Plus she liked to help people which she did everyday through her job at Commerce and Labor. There she helped people find jobs and she was such a well-known face that when she didn’t come into work one day – her supervisor and a friend at work both quickly realized something was wrong. They went to Nori’s to see if she was ok and that’s when they found her body.

Nori was killed on the 28th of September back in 2004. And in spite of all the time that has passed – to this day no one knows why she was found naked. The rape kit had come back that she wasn’t assaulted and people that knew her swear she wouldn’t have slept naked. So that’s the first mystery Kelly and Yolanda have to deal with.

There was three primes suspect for Nori murder but the cops couldn’t find anything that would stick so the ladies decided to reveiew the suspect list. There was Robert Spillet. He was a register sex offender which might explain Nori’s condition upon her death.

Rober had met Nori through her work. He was a probation and parole officer had told him to get a job. However Robert spent more time flirting with Nori than actually looking for work.
Then there’s Torey Adamcik. Two years after Nori’s murder, Tory and a friend were arrested for stabbing a classmate but it’s important to not he would have been 14 at the time someone had targeted Nori.

And lastly there’s Brad Compher. He was also looking for work and was a job service client. Though he’s the only one that minimized his connection to Nori. He says he never spoke to her yet his finger print was found on her screen door.

Now Yolanda and Kelly went to the crime scene to picture how things had gone down and what they found is that someone had purposely went into Nori’s house just to kill her. The murderer went through a lot of effort to break into her house and once he was there he attacked Nori first.

Though he did the oddest thing next. He positioned the body and then took off a ring that was on her engagement ring. Nori wasn’t engaged but she had put a ring on her left hand ring finger (that’s normally where engagement rings go). And whoever took it off then dropped it on the floor like it was inconsequential.

The cops had theorized that someone might have wanted to rob her and then later changed their mind when they realized they could get caught. But that’s explain the lengths the killer went – he couldn’t have done all he did just to steal some jewelry.

Before her death, someone had been messing with Nori’s lights and on the day she died no had seen anything because the lights were out. So that’s evidence there was premeditation.

So, after they realized that, the ladies very much wanted to speak to Torey. He lived less than 50 yards from their victim and evidence points to him being a serial killer. He used to torture animals and later when he moved up to killing people – there didn’t seem to be any regrets.

Yet Torey says he didn’t kill Nori, He apparently didn’t even know her name and really if it was him then there’s nothing holding him back from confessing. He’s already serving a life sentence and adding Nori onto his rap sheet wouldn’t have changed the fact he was going to die in prison.

Hence, the ladies had to keep looking and what they eventually found was the reason behind the ring. Nori it seems had started putting it on to deter Robert Spillet. She though that would get Robert to stop hitting on her but it had the opposite effect. Robert actually came on to her even more than before after she started to wear the ring.

The thought of her marrying someone else inflamed him. Thereby making him a more substantial suspect thanks to how the ring was found.

Though, Robert also has his testimony working against him. While he was being interviewed by the police he told Sergeant on the case that he had dream. And in that dream he described the crime scene perfectly. Down to the very same blue sheets that were on Nori’s bed.

Now, when he’s asked about the ring, Robert said he heard the details from the news. Otherwise he’s sticking to his alibi and Kelly knows the evidence they have against is circumstantial at best.

The one thing that would get Robert off if they were to bring him to trial is the finger prints on the door. There’s no explanation as to why someone else finger prints were found at the scene and Brad refuses to admit he’s ever gone near that house. Then again he is also a burglar. And Kelly is thinking like a lawyer.

She thinks Brad was possibly watching or thinking about robbing Nori’s place. Meanwhile everyone else swears the only way his finger prints could have gotten on that door is if he was leaving the house and not just approaching it.

So a new DNA test was ordered and though it didn’t give answers about the door – it did say who had touched that ring. Brad’s DNA was on the ring as well as the victim. Hence everyone now believes Brad must have run into Nori at her job and followed her home with the intent to rape and kill her.

All that’s left is to bring Brad in. The task squad wants to do that peaceful but there is a chance Brad might resist arrest. Luckily, though, he didn’t fight them when they asked to speak to him again. He simply thought they just were going to talk and yet they officially arrested him the second he entered their building.

As for Nori’s family, Kelly and Yolanda were the ones to break the news to them. After so long they had naturally given up but it came as a relief when they heard their loved was finally going to get justice.