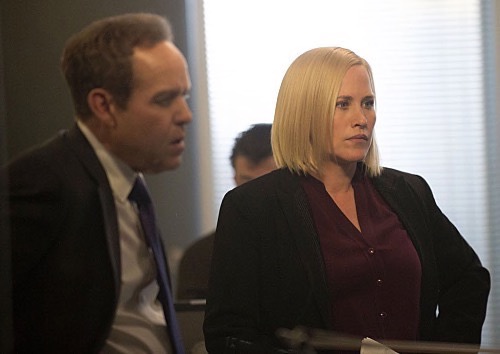 Tonight on CBS CSI: Cyber returns with an all new Wednesday March 18, season 1 episode 3 called, “Killer En Route” and we have your weekly recap below. On tonight’s episode, a car service company’s dispatch software is hacked in order to target specific passengers.

On the last episode, a roller coaster crash was investigated and the probe revealed it was caused by someone who hacked into the ride’s internal computer. Did you watch the last episode? If you missed it, we have a full and detailed recap, right here for you.

On tonight’s episode as per the CBS synopsis, “the cyber team investigates when a car service company’s dispatch software is hacked in order to target certain passengers.”

Tonight’s episode looks like it is going to be great and you won’t want to miss it, so be sure to tune in for our live coverage of CBS’s CSI: Cyber at 10:00 PM EST! While you wait for our recap hit the comments and let us know how excited you are about the new season.

The body of a military cyber security specialist was found in the early morning hours. Apparently he had been murdered not long after getting into a Zogo car, one he had ordered for himself through the Zogo app, but when the cyber unit took a look into the company’s records – all they found awaiting them was confusion. For, at first, it seemed like five cars had been sent to pick Cade Matthews up from his location and yet none of the drivers remember him nor were pinged near the route that eventually led to the dumping site. So there really was only one conclusion to draw from that – Zogo had been hacked!

But by whom was the biggest question. Their victim wasn’t just any average joe after all. He was the kind of man that had access to some pretty highly classified files though thankfully it appeared that before he died he made sure to self-destruct everything that was on his cell as a last resort.

So he knew what was coming and in last few moments on earth he tried to protect governmental breach.

Yet, what if he wasn’t killed because of his security clearance? The coroner at the scene found a child’s toy block in the victim’s mouth and it had the number 2 on it. So later when the Cyber unit ruled out any tampering on Cade’s phone or any of his computers – they took a second look at that block and realized it meant second. As in second victim.

Hence, they weren’t looking at possibly terrorist. Instead they had a serial killer on their hands and the body that must have been carrying around block one hadn’t been reported in yet. So that became their concern.

And after they looked further into the Zogo’s files, they realized their killer had been hacking into the app for quite some time.

First they ended up questioning a disgruntled cab driver. And although he did hack into Zogo, he swore he hadn’t killed anyone. He was just messing with the company that was ruining his livelihood.

Apparently the app had destroyed most of his income and what he felt was the biggest insult was that anyone, hired by that company, could drive a car. And as it turns out he wasn’t alone in this. For there was another person that had gotten upset with Zogo’s free hiring process in spite of criminal records and shady driver’s licenses.

A couple of months ago, a Zogo driver was involved in a hit and run and the driver of that car was never revealed.

It’s highly likely that the owner of the app company told the grieving family what he try to tell the feds when they came asking about Cade. The drivers are private contractors and he’s in no way legally responsible for what they do. Nor does he have to give up a name. So it was actually easy, at least for the feds that had to deal with Zogo, to understand why a man like Richard Davis might want revenge for the death of his son.

But what Richard did in order to exact revenge is where he loses all sympathy. For he didn’t go directly after Zogo. He targeted innocent bystanders in a killing spree. And when they found his apartment – they noticed how he already took block number three with him.

So Richard wasn’t going to stop though towards the end he finally started to feel guilty about what he was doing and that lead to text messages sent to the police.

It seems he wanted to get caught and when he took a Zogo driver hostage – he made sure to draw all eyes on him. He made the driver went incredibly fast even on pedestrian side streets (thus catching security cameras) and he made sure the driver also ignored all calls from the head office. So what he was doing was making a last stand. But the guys left at the home office helped slowed him down, by gridlocking him in heavy traffic, long enough to save the driver.

And all that was left was to convince Richard to come in willingly. Which in the end wasn’t so hard. Though, he put up a good fight for a man that wasn’t afraid to kill – he didn’t want to die.

So Richard’s reign of terror came to an end but elsewhere Krumitz’s nightmare was just beginning. Because the man that killed his parents is now out on parents!