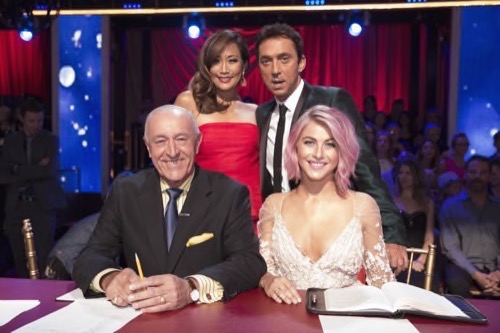 Tonight on ABC Dancing With The Stars 2015 airs with an all new Monday April 20, season 20 episode 6 and we have your weekly recap below. On tonight’s episode an elimination occurs after the sixth week of performances, which feature songs with a spring-break theme. Also: a team dance competition takes place.

On the last episode, the show began with an opening number featuring all your favorite live action and animated Disney characters dancing with the entire cast. Each couple then performed to songs from Walt Disney Animation Studios films including “Aladdin,” “Mary Poppins,” “The Little Mermaid” and “Frozen.” The evening showcased fun and exciting animated elements of Disney animation, with nods to memorable moments from Disney films. Mickey, Minnie, Donald, Pluto and Goofy kicked up their dancing shoes throughout the show. One couple faced elimination at the end of the night. Did you watch the last season finale? If you missed it, we have a full and detailed recap right here for you.

On tonight’s episode as per the ABC synopsis, “the eight remaining couples will celebrate the season with individual routines to a variety of spring break inspired songs plus a competitive team dance performance. For the team dances, the cast has been divided into two groups, #TeamTrouble and #TeamYOLO. The teams will compete in a dance-off, vying for a perfect score from the judges. At the end of the night, one couple will face elimination.”

Judges Comments: Len: “It’s the best dance so far tonight. I don’t care who else comes on, no one give us more fun and entertainment but you.” Julianne: “You were light on your feet, this was great, every week it is so much fun to watch you both together.” Carrie Ann: “You are the most consistent performer, tonight it was great, it was magical.”

Judges Comments: Julianne: “Overall it was super fun but I found there was a disconnect in your bodies, it is week six, trust each other and keep going.” Bruno: “That is how you attack a Tango. Incredible drive and determination, you were amazing.” Carrie Ann: “Your movement quality is insane, what is lacking, you have to stop going back to gymnastics.” Len: “You are supposed to be slow and low, you missed that.”

Judges Comments: Bruno: “I love how your performances are so great, you always pack a punch, those lifts were brilliant. Be careful not to shake when you transfer weight from one leg to the other.” Carrie Ann: “I loved it, you kept it G rated for spring break, great job.” Len: “I loved it, the lifts could have been better, but very very good.” Julianne: “Your upper body was amazing, just watch your legs.”

Judges Comments: Carrie Ann: “You guys are so cute, you didn’t miss a step, you just missed the timing.” Len: “There was lots of content, it is better than last week.” Julianne: “You fight every week, you are in it to win it, you are both energetic.” Bruno: “You were bouncing around like a frisky pony, you were just on the wrong track, you need to keep in time with Kym.”

Judges Comments: Len: “You never cease to amaze me, it had some lovely action, you were right on time – you are an amazing guy.” Julianne: “We know the reaction you get, your hip action is great. You need to work on your arm movement, less robotic.” Bruno: “What you to do is so magnetic, you manage to get the hips going which is very difficult for men to do.” Carrie Ann: “I appreciate that you tried to add more, keep your head on straight, you deserve to be here.”

Judges Comments: Julianne: “My expectation for you is so high, that was a little underwhelming for me, I feel like there is so much more potential you could have done with that.” Bruno: “I disagree, you gave it your own interpretation and it was hot.” Carrie Ann: “I think we took the wrong turn, it lacked elegance.” Len: “I am a cup tee, I don’t like that raunchy stuff, it is not a bedroom.”

Judges Comments: Bruno: “It was a spring awakening for Chris, I loved the lines, the musicality – you were spinning like a wheel of joy.” Carrie Ann: “The audience was in love you, well done.” Len: “Once you got into hold, your footwork went off, you need to work on the detail, it lacked detail.” Julianne: “I was seriously blown away, you were so confident. I am so proud of you.”

Judges Comments: Carrie Ann: “You make me want to be a teeny bopper again. I love listening to you dance.” Len: “You dance like I cook, you through it all in and hope for the best. It was good, not great.” Julianne: “I thought that was fantastic. I would say to work on your legs though.” Bruno: “That had the vitality of the Samba, you bring it every time to another level, I absolutely adored it.”

The first couple who is safe is Nastia Liukin and Derek Hough. Willow Shields and Mark Ballas are safe too. Noah Galloway and Sharna Burgess and Robert Herjavec and Kym Johnson are in jeopardy.

Rumer Willis and Valentin Chmerkovskiy are safe, Chris Soules and Witney Carson are also safe. Patti LaBelle and Artem Chigvintsev and Riker Lynch and Allison Holker are in jeopardy.

Judges Comments: Len:“That was no wipeout, it was tight, together and terrific.” Julianne: “That is exactly what spring break is about, loved it.” Bruno: “You all showed your best, it was good.” Carrie Ann: “You guys killed it, that is the spring break I want all the time.”

Judges Comments: Julianne: “It was tight, it was so right on and unique, I loved it.” Bruno: “That was so cleverly put together, Chris, tonight is your breakthrough night.” Carrie Ann: “That was the bomb, Patti you were great.” Len: “Riker, I look at you and think of myself in ’59. That was so much fun, it was great.”

Time for the final results, the next couple that is safe is Noah and Sharna. Also coming back next week is Riker and Allison. On this sixth week of competition, the couple leaving the show is Patti and Artem. This means that Robert and Kym are safe.