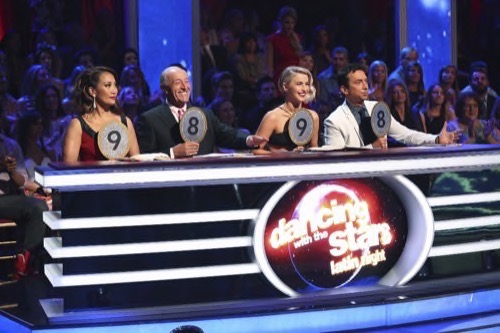 Tonight on ABC Dancing With The Stars 2015 airs with an all new Monday April 6, season 20 episode 4 and we have your weekly recap below. On tonight’s episode another elimination occurs after the fourth week of performances, which feature songs representing memorable years in the celebrities’ lives.

On the last episode, the shirts came off when Latin Night returns to “Dancing with the Stars”. The evening kicked off with a steamy opening number choreographed by Mandy Moore and the eleven remaining celebrities debuted a new dance style, on what’s always the hottest night of the season. The couples performed a variety of Latin dances such as the Samba, Rumba, Salsa, Argentine Tango, Paso Doble and Cha Cha as they competed for America’s vote. At the end of the night, one couple was eliminated from the competition and hanged up their dancing shoes. Did you watch last week’s episode? If you missed it, we have a full and detailed recap right here for you.

On tonight’s episode as per the ABC synopsis, “Each celebrity will set out to leave a lasting expression with their dances as they celebrate their most memorable year. Each couple will perform to a song of the celebrities choosing that encompasses an unforgettable time, or truly incredible experience in their life. These heartfelt performances promise to showcase some of the most exciting choreography and emotionally powerful routines of the season yet. Viewers can expect to see celebs reflect on personal moments such as Willow Shields in the ‘Hunger Games’ arena, Suzanne Somers paying homage to ‘Three’s Company’ and Bachelor Chris Soules romantic proposal to his fiancé Whitney Bischoff, to name a few. At the end of evening, one couple will be eliminated from the ballroom competition.”

Len begins the evening by telling Nastia Liukin and Derek Hough that they are safe this week.

Judges Comments: Len: “That was a fantastic dance, not necessarily a fantastic Argentine Tango but it was clean, physical – lacked the character of the dance.” Julianne: “You nailed it in 2008 and you nailed it tonight.” Bruno: “It was a stunner, it was a gem sculpted by a master.” Carrie Ann: “Len is grumpy and that was incredible, fantastic for week four.”

The next couple that are safe is Robert Herjavec and Kym Johnson. Riker Lynch and Allison Holker are in jeopardy, as well as Michael Sam and Peta Murgatroy.

Michael Sam and Peta Murgatroyd dancing the Rumba to “I’m not my father’s son,” for the year 2014 when he came out as a gay man. [VIDEO HERE]

Judges Comments: Julianne: “I love this stage of the competition, it is so real and you were so beautiful.” Bruno: “You should be very proud of yourself, it takes an enormous amount of guts to come out as you are. All that struggle is worth it, your dance was the best you ever done.” Carrie Ann: “Dance is so much more than movement, you truly were dancing your soul for us. Sometimes your posture shows too much that you are strong, but that was really beautiful.” Len: “Tonight you came out into the light.”

Riker Lynch and Allison Holker dancing the Tango to “Shut Up and Dance,” for the year 2014 when his gang really became famous. [VIDEO HERE]

Judges Comments: Bruno: “You have so much talent and youthful enthusiasm, that music was so hard to interpret as a Tango but you did well.” Carrie Ann: “I like that you took comments last week and listened to me, however your chemistry was off.” Len: “It was a tad on the hectic side, you could have kept your hold in a bit more.” Julianne: “You have to focus on your frame, you pop like nobody else though.”

Robert Herjavec and Kym Johnson dancing the Waltz to “The Last Waltz,” for the year 2006 when his mother passed away from cancer. [VIDEO HERE]

Judges Comments: Carrie Ann: “I am sure your mom is beaming with love for her beautiful son. You remind me why this show became a hit, I was transported by your performance.” Len: It was the last waltz, but your best dance. Your mom is looking on right now and cheering, well done Robbie.” Julianne: “Your frame was incredible, I want to commend Kym on her choreography.” Bruno: “Strictly ballroom and beautiful.”

Here are some more results, Patti LaBelle and Artem Chigvintsev, Rumer Willis and Valentin Chmerkovskiy, Chris Soules and Witney Carson, are all safe.

Chris Soules and Witney Carson dancing the Rumba to “The Book of Love,” for the year 2014 when he was on The Bachelor. [VIDEO HERE]

Judges Comments: Len: “It is a hard week, the dancing wasn’t that great.” Julianne: “I have to say you have improved every week, what is missing is a connection between the two of you.” Bruno: “Your turns were better than last week, but you need better flow of movement.” Carrie Ann: “There was a moment that something clicked tonight, it was great.”

Patti LaBelle and Artem Chigvintsev dancing Jazz to one of her own songs for the year 1973 when her son Zuri was born. [VIDEO HERE]

Judges Comments: Julianne: “You were shaking everything, you make me want to dance with you.” Bruno: “The Jazz was hot, go for it girl.” Carrie Ann: “That was out of control, your legs were fierce, you were hotter than Bruno Mars.” Len: It was great, good job.”

Rumer Willis and Valentin Chmerkovskiy dancing the Waltz to “Turning Tables,” for the year 2014 when she over came the tabloid bullying [VIDEO HERE]

Judges Comments: Bruno: “That was beautiful, powerful and unique.” Carrie Ann: “When I watch you dance, I melt, there is something so powerful.” Len: “It was a great dance, is it a Waltz? No.” Julianne: “To me, you are so strong and so vulnerable. There is something about when you dance, you dance for every girl.”

Suzanne Somers and Tony Dovolani dancing the Foxtrot to the theme song of “Three’s Company” for the year 1975 when she got the part on Three’s Company with John Ritter. [VIDEO HERE]

Judges Comments: Carrie Ann: “I feel like you said hello to the competition, you showed us elegance and grace.” Len: “It was full of feel good factor, I liked it.” Julianne: “I like the content, work on your upper body though.” Bruno: “It was so sweet and uplifting,be careful not to lose your neck when you turn.”

Willow Shields and Mark Ballas dancing Contemporary for the year 2011 when she got the part in the Hunger Games. [VIDEO HERE]

Judges Comments: Len: “That was fantastic.” Julianne: “That was incredible, your enter of gravity is getting better, you are taking everything we say and improving every week.” Bruno: “You are fierce and fearless, it is great to see someone so young do so well.” Carrie Ann: “Bravo, that was difficult, everything about that was great, I am blown away by you.”

Noah Galloway and Sharna Burgess dancing Contemporary to “American Soldier,” for the year 2005 when he lost his arm and leg in the military.  [VIDEO HERE]

Judges Comments: Julianne: “You are strong and in control, there was something so beautiful tonight.” Bruno: “You are the ultimate role model, a super hero.” Carrie Ann: “Beyond your story, when you dance, to me it is like a brilliant piece of art. The movement might be less than other contestants, but it was more profound.” Len: “No guts, no glory – everyone should stand up and applaud you.”