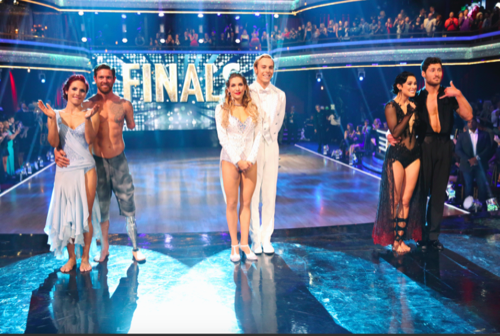 Tonight on ABC Dancing With The Stars 2015 airs with an all new Tuesday May 19, season 20 finale and we have your weekly recap below. On tonight’s episode  one of the three remaining couples: Sharna Burgess & Noah Galloway, Allison Holker & Riker Lynch or Rumer Willis and Val Chmerkovskiy are crowned the season 20 winner and wins the coveted “Mirror Ball Trophy!”

On the last episode, the three finalists competed in two rounds of dance. In the first round, each couple repeated a dance from earlier this season. In the second round, in one of the biggest competitive dances of the season, the couples took on a supersized Freestyle dance featuring special effects, additional dancers and unexpected surprises. Did you watch the last episode? If you missed it, we have a full and detailed recap right here for you.

On tonight’s episode as per the ABC synopsis, “the show kicks off with a high-energy opening number featuring a reunion of all 12 of this season’s couples in addition to the judges and hosts. Then, one couple will perform an encore of their Freestyle dance as decided on by the judges. The finale will also feature a performance to “Juicy Wiggle,” by RedFoo and encore performances by Charlotte McKinney and Keo Motsepe to “California Girls,” Suzanne Somers and Tony Dovolani to “Copacabana” featuring six additional dancers, Robert Herjavec and Kym Johnson to “Bills,” Chris Soules and Witney Carson to “Footloose,” Willow Shields and Mark Ballas to “Alice’s Theme,” Nastia Liukin and Derek Hough’s Charleston to “Honey, I’m Good” featuring a performance by Andy Grammar and much more. The night will also include a reprise performance from Patti LaBelle and Artem Chigvintsev to “In Da Club,” and the Grammy award winning artist will also perform her hit song “2 Steps Away.” Additionally, fan favorites from past seasons Amy Purdy, Alfonso Ribeiro and Sadie Robertson return to the ballroom for special performances. Sia will perform her hit song “Elastic Heart” with a special dance performance by Derek and Julianne Hough. The star studded night will continue with a performance by Jason Derulo singing his hit song “Want To Want Me.” In the last element of competition, the couples will perform a new routine as part of a “24 Hour Fusion Challenge.” The remaining couples will fuse two contrasting dance styles that they’ve performed this season and they’ll have less than 24 hours to prepare that dance for additional judges’ points. At the end of the night, the winner of the Gold Mirrorball trophy will be announced!”

Tonight’s season finale of Dancing With The Stars kicks off with an exciting number featuring all of the pro dancers, the celebs that were already eliminated, and the final three teams: Riker and Allison, Rumer and Val, and Noah and Sharna. DWTS host Tom Bergeron takes the stage and introduces his co-host Erin Andrews. There will be one more round of competition, and the finalists will perform the dances that they were assigned last night. As of right now Riker and Allison and Rumer and Val are tied with 80 points, and Noah and Sharna have 72 points. Now it is time for the encore, DWTS fans voted on Twitter – and they decided that they wanted to see Riker and Allison perform their freestyle again.

After a quick wardrobe change, Riker and Allison head back out on the Dancing With The Stars stage to perform a rendition of “What I Like About You.” Erin Andrews interviews them afterwards and asks Riker if he thinks that he could win the Mirror Ball Trophy. He says that he really hopes so, he has put everything in to this competition. Tom Bergeron introduces former contestant Redfoo and his old dancing partner Emma Slater, he performs his new hit song “Juicy Wiggle.”

After Redfoo and Emma’s performance, the DWTS hosts share a highlight reel of some of their favorite moments during Season 20. Up next is another fun performance from former celebrity dancers – Alfonso Robiero and Sadie Robertson. Tom joins Alfonso on stage after his performance and says that he has a huge announcement, Tom has retired from hosting America’s Funniest Home Video – and Alfonso will be replacing him. Tom jokes that hosting America’s Funniest Home Videos will be just like competing on DWTS, Alfonso should remember to “wear a cup.”

Former contestants Robert Herjavec and Kym Johnson head up on stage for their last performance together – which is a bizarre spoof off from Robert’s Shark Tank Millionaire show to the hit song “I Got Bills.” After their performance, Tom Bergeron jokes that Robert is “one happy shark.” Singer Jason Derulo takes the stage next and performs his hot new song “Want To Want me,” with the assistance of pro-dancer Emma Slater.

Bachelor star Chris Soules takes the Dancing With The Stars stage next and he and his pro dancing partner Witney Carson perform a rendition of their wildly popular dance to “Footloose.” Up next is Nastia Liukin with her DWTS partner Derek Hough, and interim partner Sasha Farber – Andy Grammer joins them and sings his hit song “Honey, I’m Good.” Previously eliminated Hunger Games star Willow Shields and her pro partner Mark Ballas are up next – they reenact their popular dance from Disney Night – Alice In Wonderland.

The wildly popular girl group Fifth Harmony takes the stage for their special guest appearance, they perform their hit song “I’m Worth It,” with the help of some of the pro dancers. The ridiculously hot male pro dancers take the stage next and strip down and perform a Magic Mike inspired dance to Flo Rida’s hit song “GDFR.” Up next is brother and sister duo Derek Hough and Julianne Hough, they join hit singer Sia and dance along to her hit song “Elastic Heart.”

It’s finally time for the final round of competition. Up first is Noah Galloway and his partner Sharna, for their fusion dance they perform a combination of the cha cha and the argentine tango. Now, it’s time for their final judge’s scores. Len Goodman raves about how brilliant they have been all season, and says that “constantly and consistently they have been the viewer’s favorite.” Julianne adds, “Both of you have been the heart of this competition and taken the hearts of America and put it in the ballroom.” Bruno agrees, “You have been one of the most inspiring people that I have had the honor of sharing a stage with. You are legend.” Carrie Ann adds, “I am so sad that that was the last time we are going to see you dance. I thank you both for being so incredible.”

Riker Lynch and Allison Holker are up next, for their fusion dance they perform a combination of a salsa and a quickstep. Now, it’s time for the judge’s final critiques. Julianne raves, “I can’t believe you guys only had 24 hours. It was everything you would have wanted to see in a dance that you only had a week to do. That was incredible.” Bruno agrees, “Riker you are a unique and outstanding talent. It can only be you. You really are a multi-talented powerhouse of a performer.” Carrie Ann adds, “Riker you are a superstar! You are something so special and I love every minute of watching you dance.” Len closes with, You are the boy who brings joy! Sometimes I don’t like your style because it is a little bit wild and wacky, but I just love watching you and your enthusiasm and your attack and your energy.” The judges give Riker and Allison a final score of 40/40.

Rumer Willis and Val Chmerkosvkiy take the stage to perform their final dance together on Dancing With The Stars, a fusion of the fox trot and paso doble. Now, it’s time for their final critiques from the DWTS judges. Bruno shouts, “This guy is on top of the game! It is amazing to see how dance has transformed you, you have become a shining, and big star!” Carrie Ann adds, “You are just the real deal, the way you combine incredible movement and your emotional connection. In my opinion, they saved the best for last.” Len adds, “Listen to me Rumer, I am honest. People think that I have favorites, but you are as good as anyone who has ever been on Dancing With The Stars. If you don’t win, it will be a travesty.” Julianne closes with, “We have been the toughest on you – but when there is talent there, we push it. For me, I am a fan and you make me want to be a better dancer. I can’t wait to see what happens in your career, I am going to follow you and fangirl out for you.”