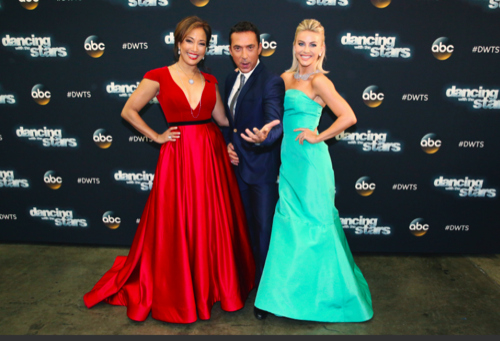 Tonight on ABC Dancing With The Stars 2015 airs with an all new Tuesday September 15, season 21 episode 2 and we have your weekly recap below. On tonight’s episode, a recap of dances from the first episode of the season and a look ahead.

On the last episode, the premiere episode kicked off with the biggest number in DWTS history shot on Hollywood Boulevard. The night continued with each couple dancing a Cha Cha, Foxtrot, Salsa, Quickstep or Jive, vying for America’s vote for the first time. No couples were eliminated on week 1, and they all advanced to week 2 of the competition. Did you watch the last episode? If you missed it we have a full and detailed recap, right here for you.

On tonight’s episode as per the ABC synopsis, “Viewers have a chance to see the couples’ dances from the previous night one more time. The show will be packed with never before seen footage from the night before, extended training packages, exclusive interviews with the couples, and a glimpse of what’s to come on week 2 of “Dancing with the Stars,” where there will be two LIVE shows with couples dancing new routines for each night.

Tonight’s episode of Dancing With The Stars kicks off with an opening number featuring the Season 21 cast of celebs and their pro partners – choreographed by Mandy Moore. When the performance is over the DWTS host Tom Bergeon takes the stage.

Up first is a look at Triple Crown Winner Victor Espinoza and his pro partner Karina Smirnoff’s rehearsals. Karina had to get creative because Victor has short term memory loss, he has had too many concussions from riding horses. Victor and Karina were rehearsing up until they took the stage and danced to “Going Down For Real.” The judges weren’t exactly wowed by Victor and Karina’s performance – but Julianne Hough was impressed by how well he moved his hips. Carrie Ann was impressed with his galloping, but joked there was literally no salsaing in his salsa performance. Victor and Karina received a 15/30.

The second performance of the season premiere was Tamar Braxton (Braxton Family Values, The Real) and her pro dancing partner, reigning DWTS champion Val Chmerkovskiy. Dancing With The Star host Tom Burgeon shares some never before seen footage of Val and Tamar’s rehearsal time. Val jokes that they have a great relationship because he is “the boss.” Val and Tamar performed an exciting quickstep and received rave reviews from Julianne Hough, Carrie Ann, and Bruno Tognoli. They received a score of 23/30. There is also a never before seen clip of Tamar and Val after the performance – he gave her an adorable pepe-talk and reassured her that she killed their quickstep.

Up next is a look back at Chaka Khan and her pro partner Keo Motsepe’s performance during the season 21 premiere of Dancing With The Stars. Chaka Khan was thrilled when she found out that Keo was her pro partner because she thinks that he is “tall, dark, and handsome.” During rehearsal they both joked that they are royalty, because she is the “Queen of Funk” and he is a Prince in Africa. Chaka Khan and Keo did the Cha-Cha to one of her hit songs. The judges were unimpressed and they received one of the lowest scores of the night, a 13/30.

The next recap tonight is Emma Slater and Hayes Grier, Hayes is only 15 years old and the youngest performer on Season 21 of Dancing With The Stars. Hayes and Emma had some difficulties getting on the same page during their rehearsals because of their 10 year age difference, but they managed to pull it together for a great performance to the song “Cheerleader.” The judges raved over the 15 year old social media star. Bruno actually referred to him as “Season 21’s boy wonder.” Carrie joked that she wished she was 30 years younger because Hayes is adorable! Hayes and Emma received a score of 21/30.

Singer Andy Grammer performed his hit song “Honey I’m Good” during Season 20 of Dancing With The Stars and he loved the show so much he came pack for Season 21 to perform as a celebrity dancer. Andy was paired up with pro dancer Alison Holker, and their foxtrot was a hit among the DWTS judges. Bruno actually dubbed Andy a “double threat” because he is “so confident and charming.” Carrie Ann thought that Allison and Andy should work on their connection a little more. They received a 21/30. They were one of the most talked about couples on social media during the DWTS premiere.

Celebrity chef Paula Deen and former champ Louis had some growing pains during rehearsal, Paula gave it her best shot during the season premiere. The audience seemed to enjoy their performance – just the judges not so much. Carrie Ann politely critiques that it “didn’t quite come together.” Paula blamed her performance on how nervous she was and joked that her “white underwear aren’t white anymore.” Paula and Louis received a score of 15/30.

Married couple Carlos and Alexa PenaVega created a lot of buzz when it was revealed that they were both competing on Dancing With The Stars. Twitter was buzzing before the show, and everyone was arguing over which one of them would be the better dancer. Carlos was paired up with Witney Carson and Alexa was paired up with Mark Ballas. Alexa and Carlos hope that they can get to the final two so that they can compete against each other. Carlos actually did one point better that his wife Alexa – but they were two of the highest scoring couples of the night.

Real Housewife of Atlanta Kim Zolciak was paired up with DWTS All-Star Tony Dovolani, but that didn’t seem to help her when it came to the judges’ score. Kim and Tony’s Egyptian salsa was almost painful to watch, and the judges weren’t exactly kind when they critiqued the reality TV star. Bruno actually said that her performance on the stage was “grounds for a divorce.” Kim received one of the worst scores of the night, a 12/30. We get to see a never-before-seen clip of Kim crying backstage after her performance, Tony comforts her and complains about leaving her kids back home for this.

Bindi Irwin was one of the most buzzed about celebrity dancers of the night, of course the fact that she was paired up with pro dancer Derek Hough definitely helped her case. Bindi and Derek’s performance was a tribute to her late father Steve Irwin. Bindi just wanted to make her dad proud and everyone back home in Australia proud. Derek and Bindi danced a jive to “Crocodile Rock.” The crowd went wild for Bindi and Derek, and so did the Dancing With The Stars judges. Julianne Hough raved that it was “the best performance of the night.” And, Bruno agreed that Bindi had “adorable charm.” Bindi Irwin and Derek Hough received a score of 24/30.

Pro dancer Anna Trebunskaya was paired up with iconic actor Gary Busey. Gary isn’t exactly the youngest guy on the show, and rehearsals were rocky because Gary doesn’t have the best stamina and he was having a hard time learning the dance moves. Gary and Anna performed “Dancing In The Streets” for the Dancing With The Stars Judges Julianne, Bruno, and Carrie Ann. Bruno was intrigued by the performance and said it was like watching a “summer blockbuster.” Julianne agreed that Gary “stole their hearts.” Gary and Anna received a 15/30.

American hero Alex Skarlatos made national headlines last month when he was in Europe and he and his friends helped stop a terrorist on a train. After becoming a media sensation, Alex was invited to join DWTS. He was paired up with pro Lindsay Arnold, and although he has never had dance experience, he wowed the judges and it was one of the best performances of the night. Alex and Lindsay received a 22/30.

Nick Carter and Sharna Burgess were the final performance of the night during the Season 21 premiere, and they were voted for on Twitter as the “most anticipated performance of the night.” Nick was a bit nervous at the beginning of his performance but Julianne, Bruno, and Carrie Ann agreed that the former Backstreet Boy “killed it.” Nick and Sharna received a 24/30, and they tied Derek and Bindi Irwin for the number one spot.