Who Will Be Voted Off Dancing With The Stars 2015 Week 5: Predictions, Paula Deen or Andy Grammer? 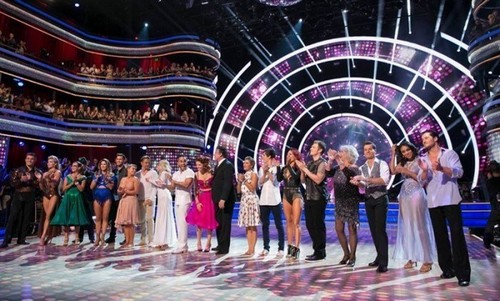 Who will be voted off Dancing With The Stars in Week 5? Dancing With The Stars 2015 spoilers tease that on Monday October 12 another Season 21 contestant will be eliminated, based on the judges’ scores and America’s votes. Week 5 of DWTS is going to be an incredibly intense one to begin with, because it is the dreaded partner Switch-Ups, and on top of that some of the dancers will already be walking on egg-shells because they are at the bottom of the leaderboard.

Last week on Dancing With The Stars, actor Gary Busey and his pro partner Anna Trebunskay were voted off the show. After the Week 4 performances, the bottom three dancers on the leaderboard were Andy Grammer, Paula Deen, and Alexa PenaVega.

Paula and Andy have been scraping along the bottom of the barrel since the Season 21 premiere, we are predicting that either Andy or Paula will get their walking papers tonight. Alexa PenaVega has been a strong contender since this season began – one low score is not going to be enough to get her eliminated this early in the season.

Dancing With The Stars predictions for Week 5 are a bit on the fence. Paula Deen is easily the worst dancer left in the competition – but her massive fan base seems to take up a large percentage of the DWTS fans that are voting, and they seem to be keeping her in the competition.

Last week we would have said without a doubt that Andy Grammer would be eliminated in Week 5, but his pro partner Allison Holker’s unexpected announcement that she is pregnant might have bought him some more time. This is a Dancing With The Stars first – fans might vote for him simply because they are excited to see how far a pregnant dancer can get in the competition.