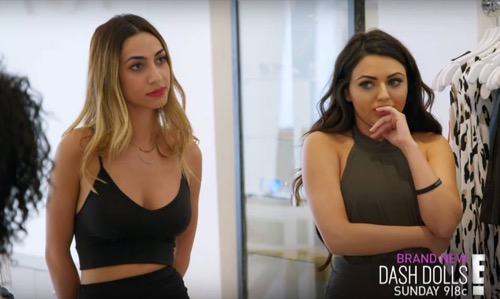 Dash Dolls continues tonight with an all new Sunday, October 4 season 1 episode 3, called “Doll Versus Doll” and we have your weekly recap below. On tonight’s episode, Durrani Aisha Popal and Alexisamor “Lexi” Ramierz’s ongoing feud boils over at work, forcing Khloé to step in and address the drama.

For those of you who don’t know, Dash Dolls is about a reality series centered on the employees of the Hollywood boutique owned by the Kardashians.

On the last episode, the Kardashians helped Malika and Khadijah cope with the aftermath of their nude shoot fallout; Durrani got a car for her birthday; the dolls tried to set up Stephanie while her boyfriend was in rehab. Did you watch the last episode? If you missed it, we have a full and detailed recap right here for you.

On tonight’s episode per the E! synopsis “Durrani and Lexi ‘s ongoing feud boils over at work, forcing Khloé to step in and address the drama. Meanwhile, even though Taylor’s relationship with her boyfriend is on the decline, she’s reluctant to end things for fear of hurting him.”

Tonight is going to be another crazy episode that you won’t want to miss, so be sure to tune in for our live coverage of E!’s “Dash Dolls” tonight at 9PM EST! Meanwhile, while you wait for our recap hit the comments and let us know how excited you are about this new show.

Lexie has given Durrani a necklace to post on her popular Instagram. She tells her that she will do her post after she completes the ones people have paid her to do.

Taylor has been in a relationship with Ryan for a little over a year. She says in confessional he is her support system in LA and the first person to support her dreams. She says she knows Ryan cares about her and that sometimes she questions why she is with him.

Lexie complains to Stephanie about Durrani telling her that she will post her jewelry after she posts about the people who have paid her. She compares Durrani to Melody, who said she would wear her jewelry every day.

Stephanie says in confessional that Lexie and Stephanie used to be friends but she thinks they aren’t as close anymore because Lexie is envious of her.

At the store, Durrani spends 15 minutes on her phone in the bathroom taking selfies.

Lexie tells the manager, Jennifer, who gives Durrani a write up. “And if you get three write-ups, you’ll be fired,” Jennifer says as Durrani signs the paper.

Durrani says in confessional that Lexie is the only person at Dash who gets her in trouble.

The Dolls are throwing a party.

Taylor is excited because Ryan is out of town, so she will be able to relax and have a good time.

At the party, he ends up showing up, which Taylor says in confessional “kinda killed the vibe for me.”

When she tries to have fun but he cramps her style, he asks her why he even came down. She tells him that she told him multiple times not to come home.

She says in confessional that sometimes she feels a little claustrophobic with Ryan, that their relationship has plateaued, they’ve been fighting and things are stale.

Durrani talks to Malika about how she and Lexie do not get along. She tells her that she saw Lexie talking shit about her in an e-mail, and she feels like she is back in high school. She starts crying, and Malika gives her a Chanel napkin with which to wipe her tears.

Malika says in confessional that she is going to have to tell the Kardashian girls what is going on in their store.

Malika shares in confessional that she has had dinner with Khloe and updated her on the catty fights that are going on in her store. She says she thinks it’s time for Khloe to step in for her business. She says a part of her is really scared that the Dolls are going to get a lashing that they aren’t ready for.

Durrani and Melody get ready to go out for food.

The two of them talk about how Taylor’s recent change in personality, which they both easily attribute to her relationship with Ryan.

Durrani says in confessional that she thinks Taylor needs to think about her own happiness.
Melody tells Durrani that she understands where Taylor is coming from because she is the type of person who doesn’t want to hurt people either, but Taylor isn’t happy and needs to do something about it.

Khloe calls a store meeting with all of the Dash Dolls.

Khloe says in confessional that she doesn’t know what is going on, but can replace every one of these girls.

She tells the Dolls that she and her sisters find out so much more than they probably think they do. She tells them they need a wake up call and that they need to act like the young adults they are. She says they are disappointed, and that if the girls don’t think she takes her brand seriously she will get rid of anyone in two seconds.

Lexie asks Khloe if she has a second to talk, telling her that she thinks Stephanie and Durrani are pulling a mean girls situation with her. She tells Khloe about the necklace drama with Durrani, and Khloe says that Durrani thinks she is cute all of a sudden, agreeing with Lexie that Durrani should have helped her out as a friend.

Khloe says in confessional that Durrani may have been here for years, but she can go as easily as any of the girls.

Khloe pulls Durrani into the room and tells her that, no offense, but her Instagram followers don’t come from nothing. She says that it’s great she is making her money but once Dash fires her, she loses all of the things she got from her job. Khloe says she is loved as one of their OG Dolls, but tells her not to get caught up because it will get old real fast.

In confessional, Durrani says that she would never throw Lexie under the bus like that.

Stephanie confronts Lexie for running to Khloe and calling her a mean girl.

Lexie says she left work early because she felt unwelcomed. Stephanie tells her that she is upset Lexie went to Khloe and called her a bully, and says that her behavior malicious and not okay. She tells Lexie she should have addressed it with her directly. Lexie tells Stephanie that she’s going to need some time alone because she’s “fucking irritated,” and then storms off.

Taylor tells Melody about an incident when she and Ryan fought at a club and he pulled her hair and called her a “fucking idiot.”

Melody tells her that it is time for their relationship to end and she doesn’t see their chemistry or bond. She says that Taylor isn’t taking care of herself and she needs to.

Lexie tells Nazy that she is going to think twice before saying something about someone next time and that she’s sorry. Nazy tells her to come to her in the future if she has a problem. In confessional, she says that she doesn’t think Lexie’s apology is genuine and that she probably just doesn’t want to lose her job, but she wants to end the drama between her, Stephanie and Durrani.

Ryan calls Taylor on the phone when she is with the other Dolls. She puts him on speaker, and tells him that what he did was absolutely ridiculous and he is not someone she wants in her life. He tells her that if she pisses him off he is going to raise his voice and call her names, saying she does the same thing. She says that she doesn’t and she thinks she is over their relationship entirely. After she gets off the phone with him, he calls her back immediately and Durrani tells her not to answer.

However, he pops up mere moments later, bursting in the door.

Taylor’s friends tell her to go talk to him since he isn’t going to give up until she does.
Taylor gets into Ryan’s car, and he begs her to stop what she is doing as she tells him she isn’t driving anywhere with him.

He apologizes, saying he didn’t mean to do what he did and was angry. Taylor tells him that he has said that before.

Taylor refuses his attempt to hold her hand, and she squirms away from him as he continues to tell her that they love eachother and are going to be together forever.

She goes back to the other Dolls, tearfully telling them that she is upset because she didn’t want to hurt Ryan.

Nazy tells Durrani that she should reach out to Lexie. She picks up the phone and calls for her, and Durrani invited Lexie to go out to dinner tomorrow to hash things out. Lexie says she agrees that they should definitely talk about it.

Durrani says she is really nervous and anxious about the meeting. She says in confessional that the two of them have strong personalities, so this meeting could cause even more drama.

Durrani and Lexie meet at a restaurant.

Durrani tells Lexie that she thinks she misunderstood what she said about the necklace, and that it wasn’t personal. Lexie says she felt it was personal because it made her wonder what she was as a friend to her. Durrani says she felt hurt by what Lexie did as they’ve been working together in the store for a long time.

Tearing up, Lexie tells her that she feels left out and alone, which reminds her of the fact that she and her dad don’t hang out anymore.

Durrani says that from now on they should take their issues to eachother instead of going to Khloe, and gives Lexie the Chanel napkin.

After discussing the end of her relationship with Ryan, Taylor looks at a photo of Melody’s brother and says that he is sexy.

Melody calls him and puts him on speakerphone, and the two of them flirt in an embarrassing manner.