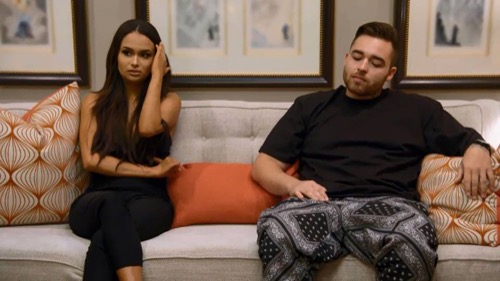 Dash Dolls continues tonight with an all new Sunday, November 8, season 1 finale, called “Dash Doll Shake Up” and we have your weekly recap below. On tonight’s episode, in the Season 1 finale, the Kardashians intervene when Melody “Mel” Rae Kandil’s flourishing modeling career begins affecting her work at Dash.

On the last episode, a camping trip found the Dolls meeting and clashing with Caroline’s new boyfriend; Malika dealt with a dear friend’s death; and Durrani got annoyed with Taylor and Shalom’s budding friendship. Did you watch the last episode? If you missed it, we have a full and detailed recap right here for you.

On tonight’s episode as per the E! synopsis “in the Season 1 finale, the Kardashians intervene when Melody’s flourishing modeling career begins affecting her work at Dash. Meanwhile, Stephanie’s boyfriend gets released from jail early on good behavior and she struggles to start a new life with him; and Durrani starts opening up to her family about her relationship with Shalom.”

Tonight is going to be another crazy episode that you won’t want to miss, so be sure to tune in for our live coverage of E!’s “Dash Dolls” tonight at 9PM EST! Meanwhile, while you wait for our recap hit the comments and let us know how excited you are about this new show.

At the start of the season, the Dash Dolls were warned by the Kardashians. They were told that they would be let go if they’re ever let outside influences affect their work. And apparently on tonight’s episode of “Dash Dolls” one girl just hadn’t gotten the message.

Mel seemed to think her job at DASH was assured. Yet she had been treating her job at the store as something second to her modelling career and had been specifically warned against continuing such a thing. So she more than anyone else should have known how much she was risking by her constant cancelling of her shifts at the last minute, but must have chosen to disregard it in order to have her cake and eat it too.

Though, lately, she’s actually been getting worse at the way she ditches work. She had gotten a call one morning and it was another one of her last-minute casting so she had asked Taylor to cover for her. And like expected that hadn’t gone down too well with Malika and Khadijah.

The twins felt like Mel hadn’t learned her lesson the first time, which was true, and they decided to call the K-Line to tell the sisters what’s been going on the store.

However that wasn’t the only drama playing out during the finale. Durrani’s brother Abdullah had also stopped by to visit his sister so Durrani felt it was finally time to start coming clean with her family about her relationship with Shalom. And so she decided to tell her brother first because she felt he would be easier.

Abdullah has always been protective of his sister therefore she’s always felt loved by him and more importantly she felt Abdullah could handle her news better seeing as he was born in the states. But when it really mattered, Abdullah was just doom and gloom. As in he didn’t seem to care that his sister was happy. And his concern appeared to be more about their parents.

He told Durrani that their parents would disown her and that there was no way around that even though Shalom has been nothing but good to her. And then Abdullah did something he shouldn’t have. He went on to tell their parents before Durrani could even get the chance to break the news herself.

In other words he betrayed her!

And in an instant Durrani family suddenly began calling her whore. Nevermind those that implied she had purposely betrayed everything they believe in, Durrani’s family was not going to talk to her again until she had ended her relationship with Shalom. So that meant Durrani had to make a tough decision. Was she going to choose her family or her relationship with Shalom?

So for a moment there, even I thought she was going to choose her family. But, surprisingly, Durrani ultimately chose Shalom. She told him that she didn’t want to let what her family said stop her from pursuing things with him and so she ended up telling him that she was willing to convert to Judaism if he felt serious enough about her.

Plus in other news Colin got out early. Oddly the judge felt his good behavior deserved to be rewarded so he received an early release from prison. Where he then hung out with his girlfriend and was soon back on drugs.

So Stephanie took Colin to see her therapist and Stephanie had to hear it for herself that she couldn’t push Colin into getting treatment. As long as she was trying to do that, he was going to rebel from what he believed to be her nagging. However Stephanie kept pushing even when she wasn’t aware of it so Colin refused to take his treatment seriously.

And the last straw in their relationship came when Colin walked right out treatment when his girlfriend was in the bathroom thereby abandoning her at the rehabilitation center.

Though in Mel’s news, she was let go from DASH for her lackluster performance. And later the whole house was in tears because of it.