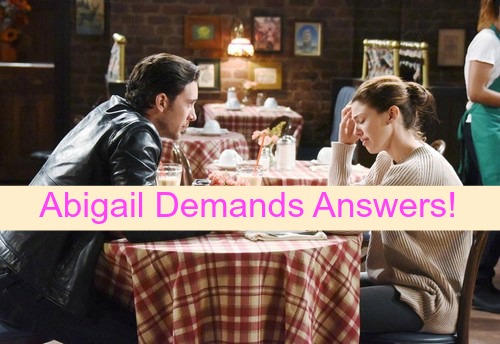 “Days of Our Lives” spoilers reveal that Chad (Billy Flynn) will soon begin his mission to seduce Belle (Martha Madison). You may have heard by now that Andre (Thaao Penghlis) will brainwash Chad to dump Abigail (Kate Mansi) and win Belle over.

Andre is counting on Belle to lead them to Sami (Alison Sweeney) and the stolen money. If Chad can get Belle under his spell, maybe they can squeeze some good information out of her.

Of course, Chad will have his work cut out for him. DOOL fans know that Chad is typically quite charming, but he’ll probably be a bit on the smarmy side once he’s Andre’s puppet. Plus, Belle recently divorced Shawn (Jason Cook) and her backup, Philip (John-Paul Lavoiser), is currently living in town. There are a lot of things working against the DiMeras in this plan.

Nevertheless, “Days” spoilers say Andre will be confident that his family will gain the upper hand. Andre feels there’s nothing the DiMeras can’t conquer. Unfortunately, most Salem residents aren’t as dumb as Andre thinks they are. That could present a problem as Chad tries to woo Belle.

John (Drake Hogestyn) and Marlena (Deidre Hall) are very wary of the DiMera clan. Marlena has a soft spot for Chad, but it’s doubtful that she’d approve of him dating her daughter. “Days of Our Lives” viewers would also hope that Belle would see through this scheme. However, the biggest obstacle for Andre just might be Abigail.

Over the past few months, Chad has repeatedly declared that Abby is the love of his life. Abigail knows that Chad truly cares about her. Suspicions will start to swirl when Chad suddenly wants nothing to do with Abby. In fact, Abigail will believe she knows exactly who’s responsible for her heartbreak.

DOOL spoilers indicate that Abigail will demand answers from Andre and Stefano (Joseph Mascolo) about whatever crazy plot they’ve concocted. They may try to deny it, but Abigail will accuse them of causing Chad’s unexpected turnaround. Will Abby rescue Chad from Andre’s planted thoughts? Stick with “Days of Our Lives” for updates on this couple’s emotional rollercoaster.

So “Days” fans, what do you think about the news that Chad will move forward with Andre’s plan? Will Abigail get to the bottom of why Chad is acting like such a jerk? What will Chad do once he realizes Andre is behind the drama? Voice your opinion in the comments below and don’t forget to check CDL often for the latest “Days of Our Lives” spoilers, updates and news.