Days of Our Lives (DOOL) Spoilers: Honeymoon Death Nears! Bo Struggles to Get Home as Hope and Aiden’s Wedding Starts 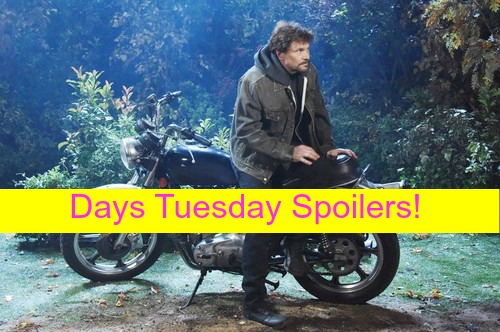 “Days of Our Lives” spoilers for Tuesday, November 3, tease that Caroline (Peggy McCay) will give Bo (Peter Reckell) updates on Hope’s (Kristian Alfonso) imminent wedding. Caroline will be relieved to know that Bo’s alive and well, but there won’t be much time for them to catch up.

Right now, Bo has to focus on getting home. Bo isn’t too far away, but he’ll still run into some trouble as he heads to Salem. Caroline will try to delay the wedding, but that’s not going to be an easy task.

DOOL spoilers reveal that the bicentennial gala will start to wind down. Everyone will take their seats as Hope and Aiden (Daniel Cosgrove) prepare to tie the knot. Despite Caroline’s best efforts, the ceremony will begin.

As they exchange their vows, Aiden will nervously mull over his murder plot. Aiden already feels guilty about his plans, but Hope’s public declaration of love should make him feel even worse.

Nevertheless, Aiden has made up his mind that he’s going through with Andre (Thaao Penghlis) and Stefano’s (Joseph Mascolo) orders. Unfortunately, the whole scheme will soon go terribly wrong. The good news is that Aiden will get the DiMeras off his back.

The bad news is that it’ll be because he’s dead. Hope and Aiden will engage in an epic battle. Bo may even show up for the conclusion of this horrific scene. Stick with “Days” to see Hope get the shock of her life.

Meanwhile, Abigail (Kate Mansi) will find herself in extreme danger. Ben (Robert Scott Wilson) has completely snapped at this point. After Abigail found all those pictures of Chad (Billy Flynn) on Ben’s phone, she knew Ben was even more obsessed than she previously thought.

Once Abigail realized that Ben could pose a threat, she tried to make a break for it. Ben quickly informed Abigail that he couldn’t let her go. In fact, Ben hinted that Abigail wouldn’t be going anywhere ever again.

“Days of Our Lives” spoilers indicate that Ben’s meltdown will continue. Ben will eventually get physical with Abigail as she tries to get away. Later this week, Ben will decide to take Abigail hostage. Abigail can’t overpower Ben, but maybe she can outsmart him.

You can expect Abigail to try everything she can to get free from this monster she’s been calling her fiancé. DOOL rumors suggest that Chad will ultimately be the one to save the day. Stay tuned to “Days of Our Lives” to see if Chad can help Abigail and bring Ben to justice.

So “Days” fans, what do you think about Bo’s attempt to get home? Are you bummed that Bo won’t be able to stop the wedding? What about Abigail’s intense struggle? Will Abigail manage to keep her baby safe amidst the chaos? Let us know what you think in the comments below and don’t forget to check CDL often for the latest “Days of Our Lives” spoilers, rumors, updates and news.