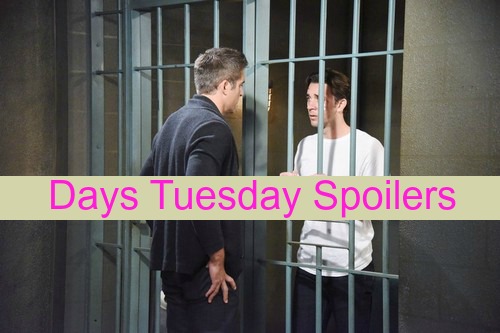 “Days of Our Lives” (DOOL) spoilers for Tuesday, November 10, tease that Hope (Kristian Alfonso) will have a tough time coping with everything she’s been through. Hope thought she was marrying a great guy, but it turns out she was sleeping with the enemy. Aiden (Daniel Cosgrove) was on a deadly mission and it certainly took Hope by surprise.

Hope would’ve been a goner if Bo (Peter Reckell) hadn’t intervened. However, that part is a little difficult to swallow as well. Hope thinks Bo abandoned her and she’ll need answers before she can start putting the past behind her. Stick with DOOL to watch Hope process the whole story later this week.

The recent strangling was enough to point the finger at Aiden for now, which means Chad (Billy Flynn) will soon be a free man. “Days of Our Lives” spoilers reveal that the charges will be dropped and Chad will be let out of jail. Naturally, Chad will want to tell Abigail (Kate Mansi) the good news, but he’ll have some trouble tracking her down.

“Days” viewers know that Ben is holding Abigail hostage in the middle of nowhere. Abigail tried to seduce Ben (Robert Scott Wilson), but he’s still hung up on her relationship with Chad. Ben will fly into a rage as he confronts Abigail about her night of passion on the DiMera property. Abigail will have to find a way to keep Ben calm and protect her baby. Those are Abigail’s main goals at the moment.

Meanwhile, Kate (Lauren Koslow) will find herself intrigued by Eduardo (A Martinez). Once they start talking, they’re sure to have instant chemistry. When Eduardo first showed up in Salem, Kate immediately gave him “the look.” It’s easy to see that Kate has her eye on Eddie. DOOL rumors hint that Kate and Eduardo will grow closer in the coming weeks. Stay tuned to “Days of Our Lives” for updates on this new pairing.

So “Days” fans, what do you think about Hope’s attempt to accept what’s happened to her? Will Chad become suspicious of what Ben has done to Abigail? Do you like the idea of Kate and Eduardo together? Let us know what you think in the comments below and don’t forget to check CDL often for the latest “Days of Our Lives” spoilers, rumors, updates and news.