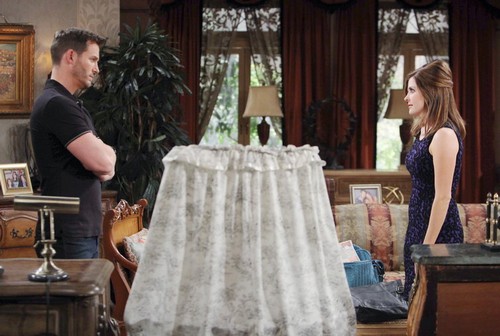 “Days of Our Lives” spoilers for Tuesday, July 28, tease that Chad (Billy Flynn) will ask Will (Guy Wilson) for some much-needed help. Chad desperately wants to tell Abigail (Kate Mansi) how much she means to him, but she’s wary of trusting him for obvious reasons. However, Chad’s wishy-washy behavior is behind him. Now Chad wants to come clean about everything and declare his love. After Will puts in a good word for him, Chad will finally have his chance. Stick with DOOL to see Chad give a heartfelt speech later this week.

Meanwhile, Clyde (James Read) will be furious when he learns Aiden (Daniel Cosgrove) is poking his nose where it doesn’t belong. When Hope (Kristian Alfonso) started asking questions about Ben (Robert Scott Wilson), Aiden became slightly suspicious. It seems Aiden’s curiosity will get the best of him. “Days of Our Lives” spoilers say Aiden will do a bit of snooping, which could mean bad news. Clyde has proven he has no qualms about taking out anyone who annoys him. “Days” rumors hint that this could be the beginning of the end for Aiden. Once you cross the line with Clyde, there’s no turning back.

Other “Days of Our Lives” spoilers reveal that Theresa (Jen Lilley) and Anne (Meredith Scott Lynn) will move into the next phase of their plan. They’ve succeeded in making the current nanny look bad and now it’s time to find another one. Of course, Theresa’s hoping the next nanny won’t be quite Brady’s (Eric Martsolf) type. Theresa will probably be on the hunt for someone elderly or maybe even a “manny” if she can find a hunky guy who’s halfway competent. Whatever the case, you can bet that Brady won’t approve of Theresa’s candidate. Since Brady is apparently running the show these days, it sounds like Theresa will have to accept his decision. Stay tuned to DOOL for updates on the nanny situation.

So “Days” fans, what do you think about Will pulling some strings for Chad with Abigail? Is Aiden making a big mistake by digging into the Westons’ background? What about the new nanny search? Will Brady foil Theresa’s scheme once again? Let us know what you think in the comments below and don’t forget to check CDL tomorrow for the latest “Days of Our Lives” spoilers, rumors, updates and news.