‘Days of Our Lives’ Spoilers: Brady Touched by Melanie’s Selfless Decision – Will Puts Sonny On The Spot, Fight Ensues

BY Heather Hughes on May 29, 2015 | Comments: 2 comments
Related : Days of Our Lives, Soap Opera, Spoiler, Television 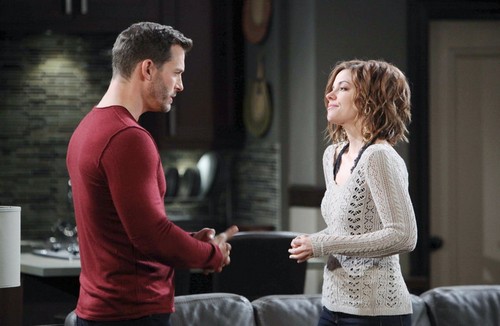 “Days of Our Lives” spoilers for Monday, June 1, tease that Will (Guy Wilson) and Sonny (Freddie Smith) will continue to work on their relationship. Unfortunately, it seems their efforts will only create more strife. Nearly every time Will and Sonny try to talk things out, it turns into a huge shouting match. When Will asks Sonny a crucial question, he’ll get an answer he wasn’t expecting. Will’s about to unleash his anger and Sonny will throw it right back at him. It sounds like Paul (Christopher Sean) could be the topic of discussion. Will and Sonny’s conversations never go well when Paul’s name comes up.

Will might ask Sonny if he’d choose to be with Paul under different circumstances. That’s surely a question that’s already on Sonny’s mind. There’s no doubt that Sonny has been thinking “shoulda woulda coulda” since Paul showed up in Salem. Paul and Sonny broke up years ago when Paul refused to come out as a gay man. Now the world knows Paul’s sexuality and that obstacle is no longer an issue. However, Sonny has moved on with Will and his own marriage is the only thing standing in the way of a relationship with Paul.

Sonny has been insisting that he’s committed to sorting through this mess with Will, but it’s going to be tough if they can’t learn to communicate. “Days of Our Lives” spoilers indicate that Will’s constant scheming will take a toll on Sonny. Sonny will likely become weary after months of Will’s jealousy and manipulation. The rumors say that Sonny may decide to make some major updates to his life. DOOL viewers are pretty divided on this love triangle. There are some loyal “WilSon” shippers out there, but there are also plenty of “PaulSon” supporters. With Freddie Smith’s on-air departure set for later this summer, it’s starting to look like both groups may be disappointed. Will Sonny decide to end his marriage to Will AND let go of his past with Paul? Stick with “Days” to see what Sonny’s relationship status will be when he leaves Salem.

Meanwhile, another DOOL star will soon make her exit. It’s almost time for Melanie (Molly Burnett) to say so long. “Days of Our Lives” spoilers reveal that Brady (Eric Martsolf) will be touched by Melanie’s selfless decision. Melanie has chosen to bow out so that Theresa (Jen Lilley) will agree to stay in Salem with Tate. Brady loves Melanie, but it seems this is the only solution to their problem. Melanie knows that it’s important for Brady to be with his son and that means she can’t be in the picture. Stay tuned to the NBC soap to see how Melanie’s choice will affect Brady’s future.

So “Days” fans, what do you think about the news that Will and Sonny will have another argument? Will Paul be the cause of their conflict once again? Are you rooting for Will or Paul? Is Melanie doing the right thing by leaving town? Let us know what you think in the comments below and don’t forget to check CDL tomorrow for the latest “Days of Our Lives” spoilers, rumors, updates and news.