‘Days of Our Lives’ Spoilers: Paige Hooks Up with Drug Dealer, Self-Destructs – Vows Revenge on JJ and Eve

BY Heather Hughes on May 25, 2015 | Comments: one comment
Related : Days of Our Lives, Soap Opera, Spoiler, Television 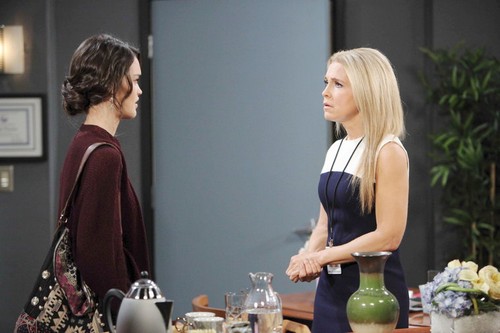 “Days of Our Lives” spoilers tease that the recent revelation of Eve (Kassie DePaiva) and JJ’s (Casey Moss) affair will lead Paige (True O’Brien) down a dark path. Paige was devastated when she learned the truth, but it looks like she’ll soon become numb from the pain. “Days” viewers can expect to see Paige fall in with a rough crowd and the situation could take a dangerous turn.

DOOL spoilers hint that a new drug dealer will pop up in town and he’ll have his eye on Paige. We don’t know for sure if Paige could start using, but it’s clear that this guy will be bad news. Paige will likely realize that he’s trouble, but at this point she just doesn’t care anymore. JJ told Paige he loved her, but he apparently didn’t love her enough to stay out of Eve’s bed. Paige didn’t buy JJ’s “woe is me” act. We can all agree that being grief-stricken over losing Paige isn’t a satisfactory reason to hook up with her mom.

What JJ did was despicable, but we can’t forget about Eve’s role in all of this. In fact, Eve probably delivered the biggest blow. After all, Paige is Eve’s own flesh and blood. Mothers are supposed to protect their children. Instead, Eve chose to hurt her daughter in perhaps the deepest way possible. Paige undoubtedly feels like she’s lost any semblance of love in her life. Even Jennifer (Melissa Reeves) has hurt Paige severely. Paige almost thought of Jen as a second mom, but now she has no one to turn to. It’s no surprise that Paige would hook up with a drug dealer if he showed even a vague form of concern for her feelings.

Bottom line, Paige is about to go as low as you can go. When a person sinks to the depths of despair, things are bound to get ugly. “Days of Our Lives” spoilers say that Paige will channel her sorrow into plans for the ultimate revenge on Eve and JJ. If Paige has to live with the aftermath of Eve and JJ’s affair, they’re going to have to deal with some consequences as well. However, JJ won’t stop trying to protect Paige from the danger to come. DOOL spoilers indicate that JJ will intervene when he senses that Paige’s life has gone drastically off course. Can JJ help Paige before it’s too late? Time will tell, but it sounds like Paige and JJ’s love saga isn’t over just yet. Some rumors have suggested that Paige could even end up pregnant by JJ or someone else. This is definitely not the Paige we used to know. Stick with “Days of Our Lives” to watch Paige’s dramatic transformation.

So “Days” fans, what do you think about the updates to Paige’s character? Are you glad the writers are taking this route? Will you enjoy seeing Paige go from glorified goody-goody to Salem’s newest bad girl? Let us know what you think in the comments below and don’t forget to check CDL tomorrow for the latest “Days of Our Lives” spoilers, rumors, updates and news.