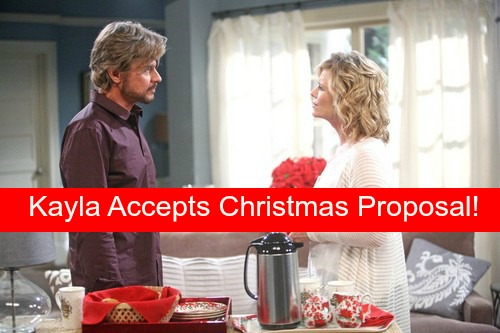 “Days of Our Lives” spoilers tease that Kayla (Mary Beth Evans) will find herself in a very awkward position. When Ava (Tamara Braun) revealed that she has leukemia, Kayla was both stunned and suspicious. In fact, Kayla will decide to have a blood test done to confirm the diagnosis.

Despite Kayla’s doubts, the results will show that Ava is telling the truth. Of course, DOOL fans know how easy it is to manipulate medical tests in Salem. You can usually count on the outcome to involve deception, especially if a villain is involved.

Nevertheless, Kayla will trust her findings and react with compassion. Kayla was recently forced to tell Bo (Peter Reckell) about his brain tumor. There was nothing Kayla could do for her brother, but she might be able to do something for Ava. Even if she can’t, Kayla will at least be willing to try.

Ava will be thrilled when her scheme works like a charm. She’ll have Kayla right where she wants her.

As for Steve (Stephen Nichols), he’ll soon get updates on Ava’s illness. However, Steve will have other things on his mind as well. Most “Days” viewers were disappointed when Kayla turned down his proposal, but Steve isn’t the kind of guy who gives up.

It seems Steve already has another plan to pop the question and he’ll have an audience for his next attempt.

“Days of Our Lives” spoilers indicate that Steve will propose to Kayla on Christmas in the presence of Joey (James Lastovic). Kayla won’t want to crush her son’s dreams by saying no right in front of him.

Besides, Kayla knows that Steve will just keep asking if she doesn’t give in. Steve intends to remarry “Sweetness” and he doesn’t care how many times he has to get down on one knee.

Kayla will accept Steve’s engagement ring and they’ll all enjoy the rest of the holiday as a family. Everything sounds just peachy, but that won’t be the case for long.

DOOL spoilers say Ava is about to drop a big bomb and the aftermath could be devastating. Stick with “Days of Our Lives” to see if Steve and Kayla’s relationship will take a hard hit.

So “Days” fans, what do you think about the news that Kayla and Steve will get engaged? Are you happy that they’re solidifying their reunion? Will Ava manage to tear them apart? Voice your opinion in the comments below and don’t forget to check CDL often for the latest “Days of Our Lives” spoilers, updates and news.