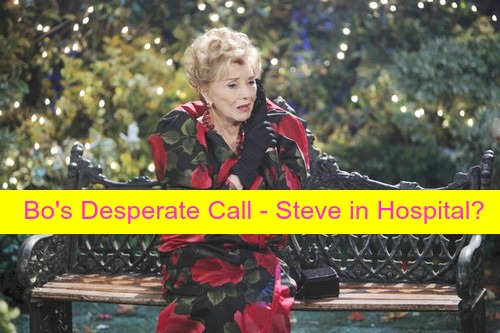 “Days of Our Lives” spoilers tease that Bo (Peter Reckell) will frantically dash home to stop Hope (Kristian Alfonso) from marrying Aiden (Daniel Cosgrove). Bo is desperate to get back to “Fancy Face” before she ties the knot and moves on with her life.

Once Steve (Stephen Nichols) got the phone working on the plane, Bo tried calling Hope to let her know he was on his way. Unfortunately, there was too much static and Hope hung up.

Bo wasn’t able to contact Hope, but he’ll have a chance to talk to someone else he holds near and dear to his heart. DOOL spoilers reveal that Bo will find another phone and reach out to Caroline (Peggy McCay).

Bo will be thrilled to hear Caroline’s voice, but there won’t be much time for chit-chat. After Bo assures Caroline that he’s safe and sound, he’ll want updates on how soon the wedding is. Caroline will insist that it won’t be long now. Bo needs to get to Salem ASAP!

“Days of Our Lives” spoilers show that Bo will tell Caroline to do whatever she can to stall the ceremony. Bo is trying his best, but he’s been running into obstacle after obstacle. Still, Bo isn’t a quitter and he’ll fight to the bitter end. As for Caroline, she’ll take drastic action to cause a delay.

Caroline recently got out of the hospital and she’s been doing much better. However, many of Caroline’s friends and family members are worried about her seemingly crazy visions of Bo. Perhaps Caroline will try to use that concern to her advantage by faking a setback in her health.

Of course, Caroline could also try to sabotage part of the wedding in an attempt put the brakes on things. There’s surely some type of scene Caroline could cause. Whatever the case, Caroline’s efforts won’t be enough. Hope and Aiden will marry just as Bo and Steve arrive in town. It appears Bo will be in good shape, but “Patch” might need a little patching up after that turbulent journey.

“Days” spoilers say Kayla (Mary Beth Evans) will be shocked when a loved one is quickly dropped off at the hospital. It’s possible that it could be Caroline trying to pull something in the aforementioned wedding delay, but seems more likely that it’s Steve who’s rushed in for treatment.

This might serve as a way of bringing Steve and Kayla closer together. The fact that Steve brought Bo home certainly won’t hurt either. DOOL rumors hint that “Patch” and “Sweetness” will resume supercouple status down the road. Stick with “Days of Our Lives” to see if their reconciliation is in the works.

So “Days” fans, what do you think about the news that Bo will get in touch with Caroline? How will Caroline try to stop the wedding? Since Caroline’s efforts fail, does that mean Steve’s the one who ends up in the hospital? What does the future hold for Steve and Kayla? Let us know what you think in the comments below and don’t forget to check CDL often for the latest “Days of Our Lives” spoilers, rumors, updates and news.