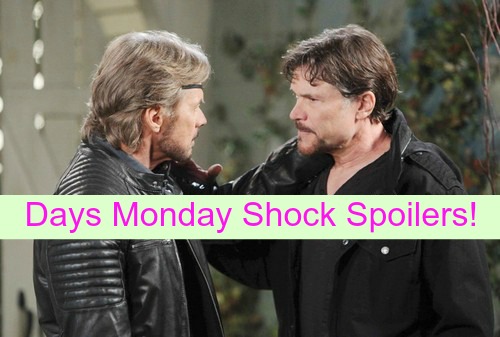 “Days of Our Lives” (DOOL) spoilers for Monday, November 16, reveal that Kayla (Mary Beth Evans) will be forced to give Bo (Peter Reckell) some terrible news. Of course, Bo is already aware of how serious this situation is. After Bo saw Kayla’s reaction to his diagnosis, he knew he was dying. The details probably won’t matter much to Bo.

Nevertheless, Kayla will give Bo updates on his dire condition and he’ll decide what his next move should be. Bo will come up with a plan that Kayla isn’t on board with, but she’ll try to accept his wishes. Right now, Bo has to take advantage of these last fleeting moments with his family. Stick with DOOL to watch Bo drop the bomb on Hope (Kristian Alfonso) later this week.

Meanwhile, “Days” spoilers tease that Brady (Eric Martsolf) will get caught in the crossfire at the Kiriakis mansion. Now that Brady has chosen to pursue a relationship with Theresa (Jen Lilley), there’s going to be major trouble with Victor (John Aniston). Victor loathes Theresa and it’s safe to say she’s not a fan of him either.

However, Tate’s arrival forced them all to become one dysfunctional family. In fact, Tate may be what ends up keeping Victor at bay. Tate needs both of his parents and the current arrangement can provide a stable environment. Brady’s love life is a different story. Victor is in no position to tell Brady who he can or can’t date, but that won’t stop him from trying.

Across town, we’ll see another family conflict when Chase (Jonathon McClendon) overhears Ciara (Vivian Jovanni) making disparaging comments about Aiden (Daniel Cosgrove). Chase is still having a tough time accepting what Aiden tried to do. Despite Hope’s version of events, Chase thinks Bo is a murderer and he’s not happy about the Brady pity party. Ciara and Chase will argue about their fathers as the stress begins to take its toll.

On Smith Island, Abigail (Kate Mansi) will try everything to escape from Ben’s (Robert Scott Wilson) grasp. “Days of Our Lives” spoilers say Abigail will make progress in her attempt, but it looks like she’ll ultimately fail.

If Abigail wants out of this jam, she’s going to need a hero. Luckily, Chad (Billy Flynn) is willing and ready. DOOL rumors hint that Chad will show up at the cabin just in time to save the day. Stay tuned to “Days of Our Lives” to see Chad’s daring rescue.

So “Days” fans, what do you think about the news that Bo will find out he’s a goner? Will Brady be able to tame Victor’s temper? Will Chase and Ciara sort things out? Can Abigail’s baby survive in these unfortunate circumstances? Let us know what you think in the comments below and don’t forget to check CDL often for the latest “Days of Our Lives” spoilers, rumors, updates and news.