BY Sean O'Brien on November 9, 2015 | Comments: one comment
Related : Days of Our Lives, Soap Opera, Television 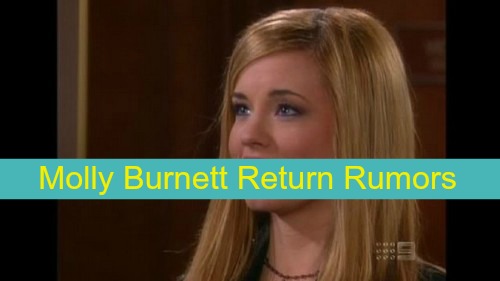 “Days Of Our Lives” (DOOL) spoilers are teasing that Molly Burnett could be headed back to Salem as Melanie Jonas. Rumors or Molly Burnett’s return have been floating around the internet for weeks now, and they kicked in to overdrive when “Days” star Jenn Lilley (Theresa Donovan) began following Burnett on Twitter.

Could Molly Burnett be one of the many stars returning to the NBC soap for the big 50th anniversary extravaganza during November Sweeps?

Obviously, Jenn Lilley following Molly Burnett on Twitter is not enough evidence to come to the conclusion that Melanie Jonas is returning, however there is plenty of other reasons out there to believe that the “Days Of Our Lives” rumors are true.

Remember, “DOOL” films 6 months in advance – back in June 2015 both Soap Opera Digest and Daytime Confidential were reporting buzz among their soap insiders that Molly Burnett was back on the NBC soap set. And, Jason 47’s Days Website pointed out that a random photo of Melanie Jonas was filmed in the background of one of the June 13th episode’s scenes.

“Days Of Our Lives” spoilers recently confirmed that John-Paul Lavoisier’s first air date as Philip Kiriakis is nearing – so if Molly Burnett was returning, it makes perfect sense that her return would coincide with her ex-husband Philip’s return. For those of you who don’t recall, Philip and Melanie were married until he cheated on her with Chloe Lane and had a baby with her.

Philip’s affair ultimately caused the demise of their marriage in 2011. “DOOL” spoilers have also confirmed that Nadia Bjorlin will be returning to Salem as well – in late December, or early January 2016. It looks like that Molly – Philip – Chloe love triangle could be back for round two.

What do you think “DOOL” fans, is Molly Burnett returning to “Days?” Do you think that she and Chloe will be fighting over Philip Kiriakis again? Or are the casting rumors about Melanie Jonas’s big return just rumors – and nothing more? Share your thoughts in the comments below and stick with CDL for all the Days of Our Lives spoilers and news.