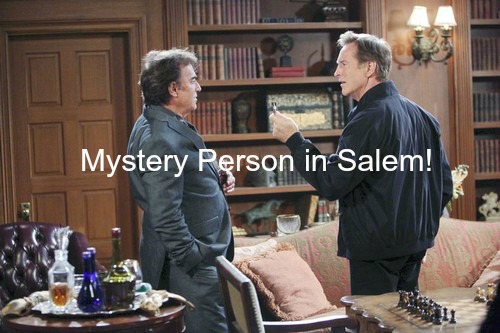 “Days of Our Lives” (DOOL) spoilers reveal that Paul (Christopher Sean) will learn some interesting information that could be of use to his father. John (Drake Hogestyn) has been trying to find out more about his past, but he hit a slight snag when he was kicked out of the ISA.

Now John doesn’t really have the tools he needs for his search. Fortunately, John is a resourceful guy and he’ll soon take advantage of an opportunity.

DOOL spoilers say Paul will give John updates on a crucial clue he’s found. John has already been doing a bit of digging into his ties to Winterthorne Academy and it looks like he’ll get another lead. Paul will announce that someone who attended Winterthorne is staying at the Salem Inn.

This person might be able to provide a few details that will aid John’s efforts. There’s no guarantee it will bring John any closer to the truth, but it’s worth a shot.

It appears John will decide to get crafty to figure out this individual’s identity. “Days of Our Lives” spoilers indicate that John will put the Salem Inn under surveillance for a while. John would like to know who this mysterious person is and this could be a good way to do it.

Of course, Marlena (Deidre Hall) will start to get suspicious. Marlena knows John better than anyone, which means it’ll be easy for her to see that he’s stirring up trouble.

After John’s unsettling encounter with the ISA’s minion, Marlena is still on edge. Nevertheless, John will assure “Doc” that she doesn’t need to worry her pretty little head. “Days” spoilers tease that John will insist his new side project has nothing to do with his former employer.

This is just John scratching an itch, but could it lead to a bigger break than he bargained for?

DOOL rumors hint that this is a long-term storyline with a lot of twists and turns ahead. Not everything will be as it seems during John’s quest to uncover his history. Stick with “Days of Our Lives” to watch John try to trace his roots.

So “Days” fans, what do you think about the news that Paul is bonding with his dad through his investigation? Will this clue be a breakthrough for John? Could danger be looming in this seemingly innocent search? Let us know what you think in the comments below and don’t forget to check CDL often for the latest “Days of Our Lives” spoilers, updates and news.