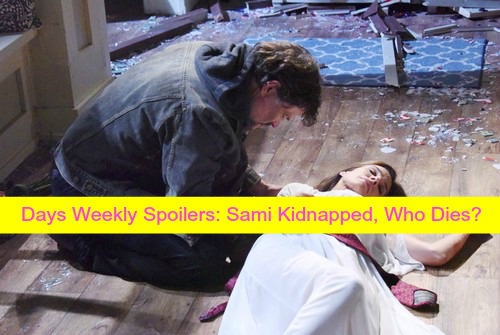 “Days of Our Lives” (DOOL) spoilers weekly preview video for November 9-13 reveals that Bo Brady (Peter Reckell) will finally make it to Salem but may be too late to save Hope Jennings (Kristian Alfonso) – formerly Brady – from being murdered by new husband Aiden Jennings (Daniel Cosgrove). It will be a race against the clock – will Hope live or die?

This week on “DOOL” viewers will see some of the most scandalous moments ever shown on the soap opera. There’s going to be big drama – and one of the most dramatic moments will be a showdown between Aiden Jennings and Bo Brady. But Abigail Deveraux (Kate Mansi) and Sami Brady (Alison Sweeney) will face what appear to be life-or-death situations, too.

Bo will rush in to save the day after Aiden has attempted to murder Hope by strangling the new bride with a red necktie. In the darkened room Hope lay lifeless on the floor as Brady and Jennings struggle with a gun. Shots will be fired and Bo will fall to the floor. Is he alive or dead? And what happened to Aiden? The DiMera henchman seems to have disappeared.

Across town Abigail Deveraux is being held hostage by a deranged and enraged Ben Rogers (Robert Scott Wilson). Abigail tries to buy time in order to find a way to escape her captor by telling Ben she doesn’t love Chad DiMera (Billy Flynn). But Ben is onto Abigail’s tricks – Ben knows that Abby slept with Chad. What can Abigail do to get out of this predicament?

Meanwhile Sami Brady has returned to town with big news after traveling to Switzerland to track down a presumed dead EJ DiMera (James Scott). Sami may have gotten a little too close to finding out what happened to EJ because it looks as if Andre DiMera (Thaao Penghlis) and two thugs will sneak up on Sami in the park and attempt to kidnap her. What does the treacherous Andre have in store for Sami?

Every indication is that Hope and Bo will survive but Aiden won’t be so lucky- the “Days of Our Lives” 50th anniversary promo hints that Hope will stab Aiden and he will die. But it is possible that Hope only injures Aiden and that a bullet will ultimately take his life.

There are a lot of questions to be answered and “DOOL” promises that this week will be filled with many over-the-top O-M-G moments. Will Abigail escape from Ben? What does Andre want from Sami? What did Sami discover in Switzerland? Is EJ alive? What do you think? Let us know in the comments below and don’t forget to check CDL often for the latest “Days of Our Lives” spoilers, rumors, updates and news.